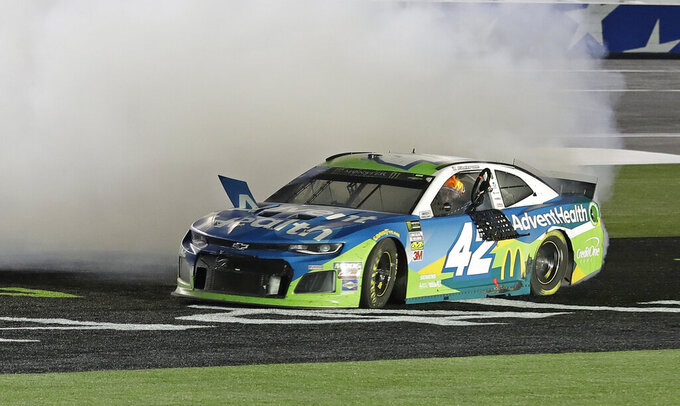 Kyle Larson holds the steering wheel out of the car as he performs a burnout after winning the NASCAR All-Star Race at Charlotte Motor Speedway in Concord, N.C., Saturday, May 18, 2019. (AP Photo/Chuck Burton)

CONCORD, N.C. (AP) — Kyle Larson got a push to the front from Kevin Harvick in the final stage, then held off the defending champion to win the NASCAR All-Star Race on Saturday night.

Larson wasn't part of the elite field when the day began, racing his way in by winning the Monster Energy Open earlier at Charlotte Motor Speedway. Now, he's got $1 million for the win and plenty to celebrate in a season where he's had only three top 10s and his biggest highlight was a frightening, airborne crash at Talladega Superspeedway last month.

"It feels amazing," Larson said. "I came close to winning a couple of years ago. It feels good to close it out."

Larson did it with a decisive shove through the pack by Harvick, a two-time All-Star champion who was eager for a third. Larson was sixth in the next-to-last restart with 12 laps left when he found enough space to squeeze between Kyle Busch and Joey Logano. Harvick jumped on Larson's bumper and powered him into the lead.

Harvick didn't count on Larson keeping it, though. Larson, a Chip Ganassi Racing driver, often had Busch and Harvick side-by-side in his rearview mirror but held them off to take the victory.

Harvick was second, Busch was third and Logano was fourth.

Soon after Larson took the checkered flag, pole sitter Clint Bowyer ran to Ryan Newman's car and began raining punches through the window before the two were separated by a crew member.

Newman said Bowyer "chopped" him on the track and hit him once more later in the race.

"Doesn't take much of a man to try and fight somebody with a helmet on. I think he should be embarrassed of himself," Newman said.

Bowyer said he didn't know why Newman hit his car.

"After the race, he comes and runs into my back and turns me all around. I pull up next to him and he dumps me into (turn) four," Bowyer said. "Where I come from, you get punched in the nose for that, and that's what he got."

Larson had not reached Victory Lane since winning four times in 2017, his most successful Cup season. While this win carries no points, it surely fuels Larson and his team with renewed confidence this season.

"It's been a struggle. I've had a lot of bad luck," Larson said. "These last few weeks have gone pretty smooth for us. To get a win, a big win, hopefully this is the turning point in our season."

Kyle Busch won the opening stage. Harvick took the second and Logano won the third before Larson triumphed in the final, 15-lap stage.

PIT PROBLEMS: Harvick said the race was a letdown since he had the fastest car and failed to win. He said the flaws came on pit road. "It was just unfortunate the way pit road went tonight because it wasn't even close of anybody having a good car like we had tonight," he said. "Good night for performance, a bad night on pit road."

EXTRA TIME: Two of the three segments of the Monster Energy Open and the first stage of the All-Star Race needed extra laps to determine a winner. William Byron outlasted Bubba Wallace in the opening race's first stage to become an All-Star. Wallace held on against Daniel Suarez in the second segment as he advanced into the main event. A late caution in the first stage of the All-Star Race forced Busch to go extras to hold off Harvick.

LARSON FLIP: NASCAR said it won't recommend any changes after an extensive review of Larson's frightening, barrel-roll crash at Talladega last month. NASCAR senior vice president John Probst said it was determined that damage to Larson's front right tire in a last-lap crash led to his No. 42 car lifting off the track surface, hitting the wall and rolling over several times before coming to a stop. Probst worked with the Chip Ganassi Racing team on the extensive analysis of the accident. They share the information with the other NASCAR Cup Series teams this week at the next competition meeting.