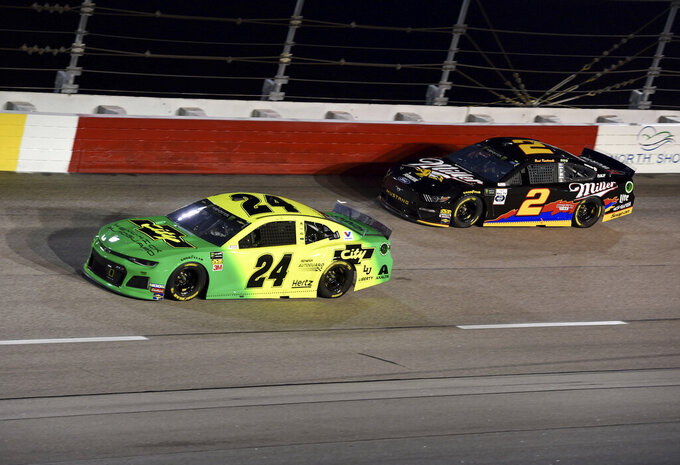 He wants to match that feat Sunday.

And if the 23-year-old rising star wins Sunday, Joe Gibbs Racing will become the first team in NASCAR history to sweep the four biggest races in a season.

"It would be pretty special," Jones said Friday during the traditional hauler parade. "We've not mentioned around the shop much but everybody wants to do this. It's something that's not easy to do but I'd be happy to win the last two."

For Jones, this season and the last couple of months could not have gone much better.

He's 12th in points and one of 10 drivers already qualified for the Cup playoff after winning the Southern 500 last weekend.

Four others — Kyle Larson, William Byron, Ryan Blaney and Aric Almirola — have wrapped up spots in the 16-driver field based on points. The final two spots will be determined Sunday and everyone will be watching seven-time series champion Jimmie Johnson, currently 18th and on the verge of missing the playoffs for the first time since the format began in 2004.

Johnson won't be the only anxious driver this weekend.

Clint Bowyer is 15th, eight points ahead of Daniel Suarez and Ryan Newman and 26 points ahead of Johnson. And last weekend at Darlington, Bowyer got a glimpse of just how challenging Sunday might be.

"He (Johnson) is doing everything he can do to make the playoffs and we are too, you know," Bowyer said. "You don't want to race guys like that. He's one of my old heroes, good friend but now it's all out the window here at the race track."

He's finished among the top four in five of the last seven races and JGR announced Friday that Jones signed a contract extension through the end of next season.

But just like Keselowski last year, Jones is now looking to pull off the Darlington-Indy double to make up for last year's runner-up finish.

"You know they say in the Olympics the worst thing you can be is the silver medalist because if you have the bronze at least you medaled but if you get the silver you were that close to winning," said Keselowski, the 2017 Brickyard runner-up and defending race champ. "Having that silver medal really sucks because you know you're so close. So, to come back and win it is really fulfilling."

It's a sentiment that now fuels Jones, who grew up in Michigan.

"Yeah, it's frustrating at the time," he said. "But now it's motivation and it's encouraging because we've run so well here. We've had fast cars all year."

Denny Hamlin claimed the season-opening Daytona 500 and Martin Truex Jr. won the Coca-Cola 600 at Charlotte. Jones' made it three in a row last week.

The fourth Gibbs driver, Kyle Busch, is the points leader this season and already owns two Brickyard titles. In 2016, he became the first driver to sweep the Cup and Xfinity races at Indy from the pole.

There will be some new twists this weekend.

For the first time at Indianapolis, qualifying and the race are scheduled to take place on the same day. Series officials made the change to give fans a chance to see both events with one ticket and it could help reverse the trending decline in attendance.

The forecast calls for high temperatures in the mid-70s with a 10 percent chance of rain for Saturday's practices and a 30 percent chance of rain Sunday — a stark contrast from last season when rain washed out the entire weekend. Keselowski returned Monday and made a late inside pass on Hamlin to take the lead before pulling away from Jones and Hamlin.

Jones thinks he can follow that lead and help JGR make history, too.

"I'd love it. I won a huge race last week but the Brickyard is one I'd really like to have for that momentum," he said. "Hopefully, we can do it."