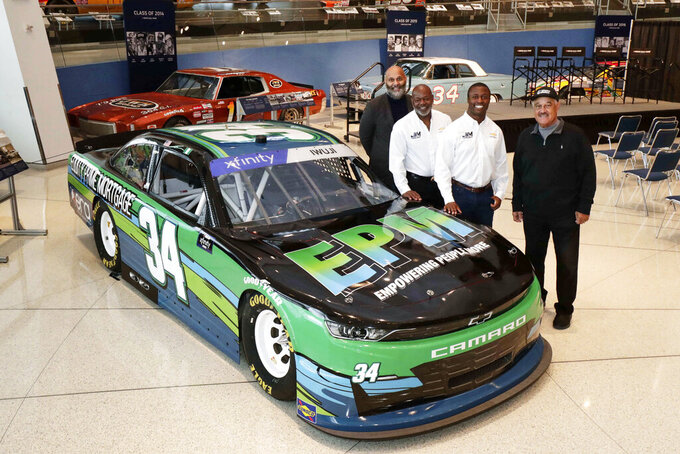 Pro Football Hall of Famer Emmitt Smith, second from left, and NASCAR driver Jesse Iwuji, second from right, are joined by Warrick Scott, left, and Frank Scott, right, from the Wendell Scott Foundation as they poses with the No. 34 Chevrolet Camaro SS Iwuji he will drive in the upcoming 2022 NASCAR Xfinity Series season at the NASCAR Hall of Fame in Charlotte, N.C., Monday, Feb. 7, 2022. Iwuji will run his first full season in NASCAR with backing from Pro Football Hall of Famer Emmitt Smith and General Motors. (Garry Eller/HHP for Chevy Racing via AP)

CHARLOTTE, N.C. (AP) — Jesse Iwuji is a lieutenant commander in the Navy Reserve who also happens to be juggling a budding NASCAR career.

He transitioned between jobs this week when he jetted out of Los Angeles following Navy drills to make it to North Carolina in time to announce his next venture: Iwuji is headed to Daytona International Speedway to begin his first full season in NASCAR with backing from Pro Football Hall of Famer Emmitt Smith and General Motors.

Iwuji will compete in the second-tier Xfinity Series and join Bubba Wallace as the only two Black drivers competing full-time at NASCAR's national level. Jesse Iwuji Motorsports will field the No. 34 Chevrolet in a nod to Wendell Scott, who overcame widespread racism to become the first Black driver to win a Cup Series race in 1963 and also used that number.

Iwuji and Smith, a co-owner of the race team, hope to show the possibilities for minorities in NASCAR. Wallace is the only Black driver in the Cup Series, but Iwuji now makes two full-time Black drivers competing at the top level of American stock car racing.

“First there was one, now there's two and hopefully there gets to be three, four, five, six,” Iwuji said in a telephone interview with The Associated Press. "It won't grow unless people see that it is even possible. When I was growing up, people asked me ‘Why didn’t you start racing when you were a little kid?'

“Well, I didn't see Black people. If I didn't see anyone in there, I couldn't envision myself in there. I saw people like me in football, so I played football.”

Iwuji played safety for Navy and his first real exposure to motorsports came before the Midshipmen played in a 2006 bowl game in Charlotte. The team went to Charlotte Motor Speedway for rides around the track, and within four years Iwuji was dabbling in drag racing.

Iwuji spent seven years on active duty following his 2010 graduation as a surface warfare officer before transitioning to the Navy Reserve. He continued to race and has competed in 20 NASCAR national series races — 15 in the Truck Series and five in the Xfinity Series — since 2018. His career-best finish in the Xfinity Series was 23rd at Texas in 2020.

Iwuji was sponsored at that race by Notable Live, a company owned by retired Cowboys running back Smith. The two collaborated on building Iwuji's own team. Now 34 Iwuji will at last attempt to run a full season for the first time.

Smith joins a slew of Black celebrities entering NASCAR. Floyd Mayweather announced a team last week that will attempt to race the Daytona 500, and Michael Jordan is the co-owner of the 23XI Racing team that fields a Cup car for Wallace.

Smith dismissed the notion that there aren't opportunities for minorities in NASCAR.

“We're trying to grow this young man into and turn him into one of the best drivers on the track," Smith said. "Whether its Jordan, whether it's Pitbull, whether it's us, it's important that we show up and compete and train our guys to beat the very best.”

Iwuji has built a strong following despite his limited time at NASCAR's national level, and four times last season was the driver selected by fans to compete in NASCAR's iRacing Pro Invitational Series.

Iwuji thinks his popularity is based on being personable and showing that hard work can get you into NASCAR.

“There's a lot more people out there like me than there are the typical drivers,” he said. "Most start really young and work their way through different series. It costs a lot of money. To do that is not cheap. So when people see someone like me, who didn't have any resources, just had a college education and I was an officer in the Navy ... to go from an average Joe to finding a way into the sport and getting into a race car, I think it inspired a lot of people.

“I think a lot of people saw themselves in me. It might not have had anything to do with my color. Maybe people just thought ‘Hey, I like this person.’"

Smith interrupted his driver to explain to Iwuji why people have been drawn to him and his budding race career: “You're approachable, you are likable, you are an American hero and you are a positive person. You're an influencer and you galvanize people and bring them together. People find that attractive and inspiring.”

After the pep talk, Smith said he'd be at Daytona next weekend for Iwuji's season-opening race. Smith is a Florida native already familiar with both NASCAR and Daytona International Speedway.

And although he's listed as a co-owner of the race team, Smith's work will be largely behind-the-scenes.

“My role is to help this man become successful in any which way I possibly can,” Smith said. “I'm not getting in the car with him. He's the driver. But I'm going to try to bring more sponsorship to the program, try to inspire him and continue to keep him motivated. Even when things get hard. I'm a support mechanism for him because he's at a new part of his journey that's about to explode.”