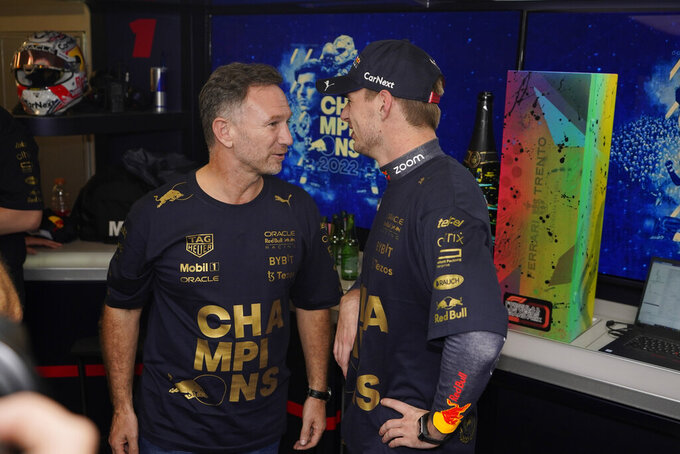 MEXICO CITY (AP) — The interview was arranged by Cash App, the official financial education partner of Red Bull Racing, and Christian Horner, the head of the Formula One team, was happy to talk about sponsorship activation in the United States.

But that was last week.

Horner is now the villain at the Mexico City Grand Prix, where he's trying to put a bizarre month behind him. Red Bull heads into Sunday's race seeking a ninth consecutive victory — and either a record 14th win of the season for Max Verstappen or Sergio Perez becoming the first Mexican driver to win an F1 race at the Autodromo Hermanos Rodriguez.

Horner and Red Bull were accused of cheating by rival teams for breaching last year's spending cap. Some called for Verstappen to be stripped of last year's title and Horner said that even employees' children were being bullied at school. So he said he “begrudgingly” accepted guilt for a $1.8 million breach of last year's $145 million spending cap to stop the madness.

Horner used a nearly 50-minute media session Friday to go over the 13 points the FIA found in violation during an audit of more than 75,000 line items — clerical errors, Horner said — that drew a $7 million fine and reduction in 10% of wind tunnel time next season.

So, no, nobody wants to talk about Cash App amidst all this Red Bull drama.

“It's a competitive business and Formula One sometimes can be a nasty business, and the problem is, the higher you rise, the sharper the knives,” Horner said in his interview with The Associated Press. "The more you win, the less popular you are, and we've done a lot of winning. That sits uncomfortably with some of the brands that belong to large automotive companies, historic brands, or historic Formula One brands. Therefore, it's very easy to have a go at Red Bull.”

To recap the past month:

— Rival teams challenged Red Bull's reputation and called for the harshest of penalties.

— Dietrich Mateschitz, the owner of the F1 team, died on Oct. 22 in Austria.

— The very next day, Red Bull won the constructor's championship at Circuit of the Americas in Austin, Texas.

Horner had already reached a settlement with the FIA, but the decision was held until Friday out of respect for Mateschitz.

The rest of the paddock seems to be in agreement that the subject is closed — even if rival teams don't like Red Bull's punishment.

“We have to move on, the penalty is what it is," Ferrari sporting director Laurent Mekies said Saturday. "We certainly feel it is low.”

Alfa Romeo team principal Frederic Vasseur added: “The biggest punishment for a team is to accept that they were overspending, in terms of image, and we don’t have to underestimate this one, for your employees, for your sponsors and so on.”

Horner doesn't discount public perception and said despite all the winning and on-track success, he could physically see the effect cheating allegations were having on Red Bull employees, "particularly to people in parts of the business that are never exposed to accusations, to suddenly have the accusation of cheating, it's a very big statement that goes to the core.

“We did not cheat," he added. "We feel that we've been publicly chastised by fellow members in the paddock, and I think that's not right."

Mateschitz plucked Horner out of a junior series in 2005. He's the longest serving team principal in the paddock and has led Red Bull to six driver championships and five constructors titles.

“He gave me the chance and he was a wonderful man,” Horner told the AP. “I am just delighted he was able to see Max retain his championship. And then the constructors title, that was fitting way with him looking down from above. We won it in a way he would have enjoyed and was the best way to honor his memory.”

As for Sunday, Verstappen can still set a record for wins in a season — he already has the championship — which would be the only reason Horner would think to issue team orders for Perez to concede victory.

But Verstappen said he won't give any races away, Perez does not want a gift and Horner said Red Bull just wants to win, no matter who it is.

Perez trails Charles Leclerc by two points for second in the standings as Red Bull is chasing a 1-2 finish on the year.

“It would lovely to be see Checo win here, he's had an amazing season and been a big part of the constructors championship,” Horner said. “But you have to be ahead of Max to win.”

And if Perez found himself out front in the closing laps with Verstappen behind him seeking history? "We would never ask a driver to give up a victory,” Horner said.