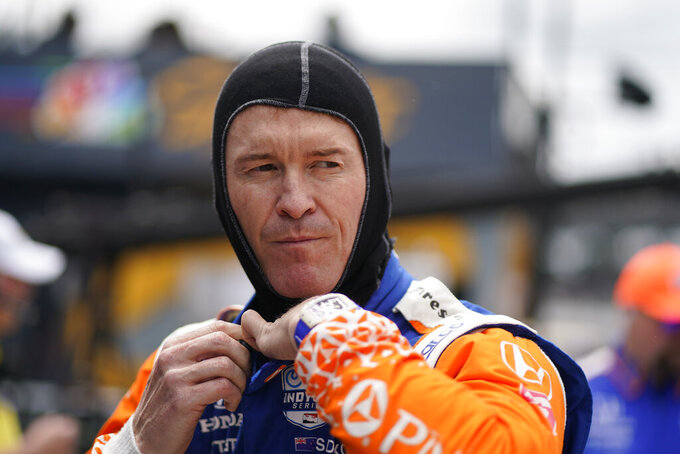 Scott Dixon, of New Zealand, prepares to drive during the final practice for the Indianapolis 500 auto race at Indianapolis Motor Speedway, Friday, May 27, 2022, in Indianapolis. (AP Photo/Darron Cummings)

INDIANAPOLIS (AP) — Chip Ganassi skipped his 1982 graduation ceremony at Duquesne to qualify for the Indianapolis 500. The Pittsburgh native made the field but turned out to be just an OK race car driver.

His strengths were outside the car and inside the boardroom. In the 40 years since, Ganassi has built one of the top open-wheel programs in North America. Ganassi has collected 14 championships and won four Indy 500s as a team owner, though the last one for Chip Ganassi Racing was a decade ago.

That's a drought the boss doesn't find at all acceptable.

“It's been 10 years since we won here, we should be trying to win this thing,” Ganassi said Friday.

Well, come Sunday, the Indy 500 appears to be Ganassi's race to lose.

He's got not one, not two, not three, but five thoroughbreds in the stable, and Ganassi cars have been untouchable for nearly two weeks at Indianapolis Motor Speedway.

Scott Dixon starts from the pole for the fifth time in his career as the six-time IndyCar champion continues his determined quest for a second Indy 500 win. The New Zealander won from the pole in 2008 but has fallen short in 18 other tries.

Dixon has been runner-up three times, and his loss to Takuma Sato in 2020 stings the most. The race ended under yellow, and Dixon had to helplessly follow Sato across the finish line. Over the past week, he set an Indy 500 pole-winning record in qualifying with laps over 240 miles per hour (386.24 kph) and now is chasing the item atop his to-do list.

“I just want to win, that's all it comes down to,” Dixon told The Associated Press. "When you are younger, you don't really give a (crap). The first championship? The first Indy 500? I had no idea. It took some (crap) years for it to actually sink in what big achievements those are.

The competition will come from within his own camp: Ganassi driver Alex Palou, the reigning IndyCar champion and last year's Indy 500 runner-up, starts second. Dixon and Palou are both 13-2 race favorites, according to FanDuel Sportsbook.

And back there in 12th? Why, it's Jimmie Johnson, the seven-time NASCAR champion making his Indy 500 debut. He's achieving his childhood dream at age 46 after proving to his wife that Indy cars have dramatically improved in safety.

Johnson knows his way around the Indianapolis Motor Speedway — he won four times at the track in NASCAR — and if not for a bobble that led to a remarkable save in qualifying, Johnson would be starting much closer to his Ganassi teammates.

“Each day we get closer to the 500, it gets busy. The pressure is ramping up,” said Johnson, who was sent to “The Tonight Show with Jimmy Fallon” this week by IndyCar to promote the 106th running of the race.

Ganassi is quick to point out that trophies aren't awarded in practice and his five-car fleet has accomplished nothing yet.

“I like our chances. We're as prepared as we can be,” Ganassi said. “You're always hesitant to feel good about the race at this place, but I probably feel as good as any car owner going into the race.”

The race is the first where Roger Penske will be able to fully open the gates since his purchase of the speedway in early 2020. His first Indy 500 was held without spectators, and last year he could admit only about 150,000.

Speedway officials expect to fall 5,000 tickets shy of a sellout, which would put more than 300,000 on the IMS grounds for the second-biggest 500 in decades and make the race again the largest single sports event of the year, as it usually is and certainly since the pandemic began.

Castroneves won his record-tying fourth 500 at age 46, and he's back again to try for a record fifth with the bolstered Meyer Shank Racing Team. His 22nd start is the most of all other drivers in the 33-car field.

Team Penske has had a quite Indy 500 buildup as Penske the owner seeks a 19th win. Josef Newgarden, a two-time IndyCar champion, is seeking his first 500 win while points leader Will Power wants a second Baby Borg.

As for Scott McLaughlin? Pandemic restrictions in Australia and New Zealand have finally lifted, allowing the McLaughlin family to reunite for the first time in 31 months in time for Sunday's race.

And then there's the enigma that is Andretti Autosport.

Colton Herta, winner on the road course here at Indy two weeks ago, blew an engine in qualifying, then rolled his car in Friday's final practice session. He was uninjured, but Andretti will have to build a whole new car in less than 48 hours.

Alexander Rossi, the 2016 Indy 500 winner, hasn't flashed anything remarkable and Marco Andretti, the third-generation racer hoping to give his famous family just its second ever Borg-Warner Trophy, hasn't shown that he's a contender.

“I don’t care what my last name is. I want to win this race,” Andretti said.

Same goes for teammate Romain Grosjean, the former Formula One driver and IndyCar's newest superstar. The Frenchman was voted most popular driver in a fan survey following last year's rookie season, but Grosjean has struggled of late with rival drivers accusing him of being too aggressive.