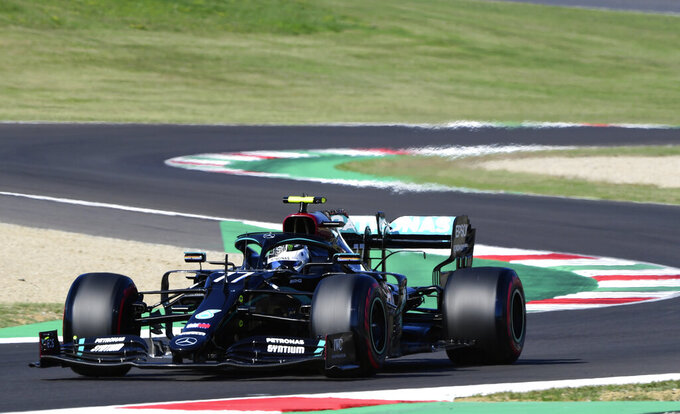 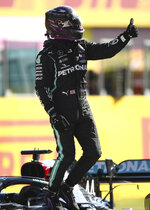 MUGELLO, Italy (AP) — Lewis Hamilton took pole position for the Tuscan Grand Prix on Saturday ahead of his Mercedes teammate Valtteri Bottas, whose final attempt was ended after he had to slow down because Esteban Ocon span on track just ahead of him.

While Hamilton clinched a record-extending 95th pole, it was hard luck for Bottas. He now trails Hamilton 7-2 this season in poles all won by Mercedes.

Hamilton waved to a smattering of fans in the stands near the finish line. They are allowed at a race for the first time this season during the coronavirus pandemic.

Bottas looked in excellent form, leading all three practice sessions and the first section of qualifying known as Q1. Hamilton stepped up a gear in Q2 and finished just .059 seconds ahead in Q3, yet Bottas did not get a chance to beat that time because Ocon's spin meant the yellow flags came out and drivers behind him had to slow down.

Max Verstappen was third for Red Bull, .365 behind Hamilton, while his teammate Alexander Albon was fourth ahead of Charles Leclerc in a commendable fifth for struggling Ferrari.

Hamilton leads the championship from Bottas by 47 points after winning five of the first eight races in his bid to equal Michael Schumacher’s record seven F1 titles. A win on Sunday would move him just one behind Schumacher's record of 91 GP wins.

Ferrari is competing in its 1,000th F1 race and was once the team to beat in the way Mercedes is now, having won 238 races, taken 228 pole positions and secured 254 fastest laps. Schumacher won five straight titles with the famed Italian manufacturer from 2000-4, but this season has been one of Ferrari’s worst in memory.

Four-time F1 champion Vettel has not even finished in the top five in a race this season and goes from 14th on the grid.

One week after winning his first F1 race at the Italian GP in Monza, Frenchman Pierre Gasly starts 16th.

He was one of the five drivers eliminated from Q1 and let out an angry expletive.

“I'm disappointed because we were good in practice, but we made errors in qualifying that cost us,” he said. “It's annoying to make these mistakes.”

Earlier Saturday, Bottas bettered Verstappen by just .017 with Hamilton .083 back from Bottas in third in warm and sunny conditions.

Hamilton looked set to beat Bottas when he led on the first time split, only to fall back in the second and third sectors. Verstappen then went out for one last run late in the session and split the two Mercedes in an encouraging sign for Red Bull on a circuit which has ultra-fast corners.

But Vettel placed a demoralizing 18th on a circuit which is actually owned by Ferrari and which he tested on as recently as June.

Mugello’s 5.2-kilometer (3.2-mile) Autodromo Internazional track, nestled amid a stunning backdrop of the Tuscan hills, usually hosts MotoGP and is hosting an F1 race for the first time. Drivers have been full of praise for it.