Elliott searches for 1st win of season in return to Austin 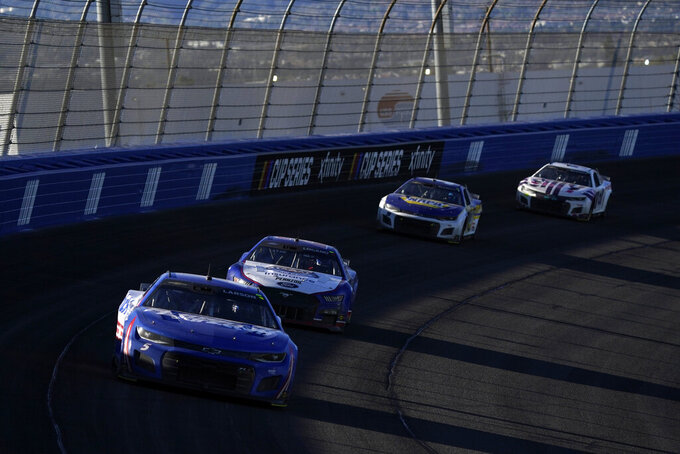 From left, Kyle Larson races ahead of Joey Logano, Chase Elliott and Alex Bowman during the NASCAR Cup Series auto race at Auto Club Speedway Sunday, Feb. 27, 2022, in Fontana, Calif. Kyle Larson sent an infuriated Chase Elliott into the fence when they made contact Sunday with just under 20 laps to go at Auto Club Speedway. Elliott's bold move to take the lead was erased when Larson, who had been side drafting off Joey Logano to stay in front, came briskly up the track and pinched Elliott into the wall.(AP Photo/Marcio Jose Sanchez)

AUSTIN, Texas (AP) — Perhaps it is at last Chase Elliott's turn to take a Hendrick Motorsports car to victory lane, where his three teammates have all visited over the last month.

The blazing start for the Hendrick stable has stretched to three wins over four races — Kyle Larson won at Fontana, Alex Bowman at Las Vegas and William Byron at Atlanta — and only Elliott is still seeking his first win of the season. He's got a good shot Sunday in NASCAR's second trip to the Circuit of the Americas permanent road course, where Elliott is the defending race winner.

Elliott's victory last year came in torrential rains that shortened the event by 14 laps. It was no surprise to see the 2020 Cup Series champion pick up the road course win; he leads all active drivers with seven career victories on road courses.

The challenge this year is understanding NASCAR's new Next Gen car, which debuted in January and has been spectacular in improving the racing. The season has opened with five different winners through five races as the entire garage — except maybe the Hendrick teams — figures out the new car. Austin is the first of six road courses on this year's Cup Series schedule.

“I think it’s really more questions than answers," Elliott said. “To me, COTA is going to be that first opportunity for all the drivers to really kind of get in tune with this car on a road course. I didn’t think it really drove a ton different than the old cars on the road course."

When he did get to turn laps in the Next Gen on the hybrid road course at Charlotte Motor Speedway, NASCAR's new car reminded him of the IMSA GT cars Elliott has competed against when he dabbles in sports car racing. Elliott, who is the Cup points leader despite being winless so far this year, said the Next Gen should make for a good race.

Byron, his teammate and winner last Sunday in Atlanta, said the car may be so suited for a road course that the teams who are learning the Next Gen quickest might dominate.

“Maybe the car drives so good that the race isn't as good?” Byron said. “The races on the ovals are good because the car drives so bad. We used to have all the side-force and the rear end, all the skew, and now you don't have any of that. I think it will be exciting because you'll see a lot of commitment from the drivers, but it also might be a spread-out race.”

Elliott is the race favorite per FanDuel Sportsbook. NASCAR's stop at COTA is promoted by Speedway Motorsports, which leases the track in an effort to add a variety of racing circuits to the schedule.

Kyle Larson has already done the whole endurance racing thing and his 2015 victory with Chip Ganassi Racing in the Rolex 24 at Daytona fulfilled his desire for sports car racing.

Now he's interested again, piqued by last week's announcement that Hendrick Motorsports is working with IMSA on a special project to take the Next Gen to the 24 Hours of Le Mans next season.

It's been presumed that NASCAR will try to send at least one current Cup star as part of the three-driver lineup and Larson said he's interested. Although teammate Elliott is considered the road racing ace, Larson last year won three times on road courses and has three previous 24-hour races on his resume.

He said team owner Rick Hendrick tipped him off the day before the announcement and he was floored it was the first he was hearing the team was building a car for Le Mans.

“I had no clue. They kept that one undercover really good,” Larson said. “If they were taking it to the Rolex in Daytona, I probably would want to do it because I've done that before. But I've never competed at Le Mans and I would like to do that one. I've never been to France.”

AJ Allmendinger, the ringer for first-year Cup team Kaulig Racing, returns for his second start of the season in a Chevrolet that owner Matt Kaulig expects to win races.

Allmendinger won on the road course at Indianapolis last summer and was fifth in the inaugural race at COTA last season. But with a clear forecast and warm temperatures slated for Sunday, Allmendinger has no idea what to expect.

“Everybody’s so good on the Cup side of it, so I wouldn’t say that this car lends more of an opportunity for myself," he said. "I do like how aggressive you can be with it. You can kind of toss the car around a bit more, just a little bit more nimble, the steering is quicker, the car reacts quicker.

“It makes it enjoyable to go out there and attack a race car, especially at a place like COTA where there’s so many corners, so many different types of corners that whether it’s high speed or late on the brakes.”