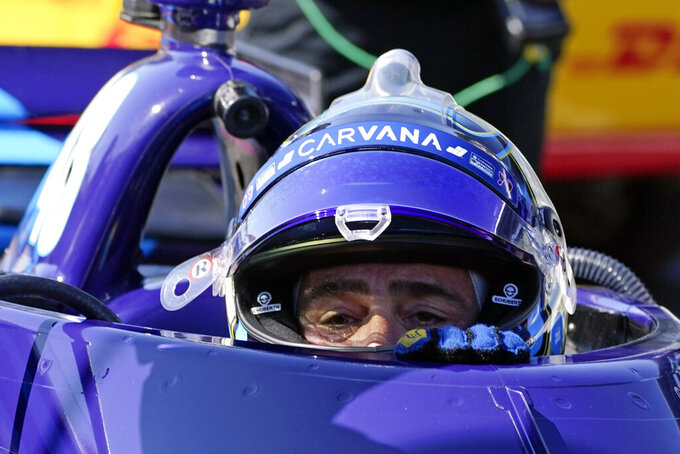 FILE - In this May 14, 2021, file photo, Jimmie Johnson climbs out of his car following practice for the IndyCar auto race at Indianapolis Motor Speedway in Indianapolis. When a pair of poor finishes cost Alex Palou the IndyCar points lead, the second-year driver found teammate Johnson for a pair of pep talks. Johnson may be an IndyCar rookie on the track, but the intangibles he brings to Chip Ganassi Racing as a seven-time NASCAR champion are invaluable. (AP Photo/Darron Cummings, File)

PORTLAND, Ore. (AP) — Jimmie Johnson finished 20th at Portland International Raceway — he wasn’t last, Johnson has yet to finish last through 10 IndyCar races — then hopped on an electric scooter for a quick ride to victory lane.

Johnson wanted to spend a minute congratulating teammate Alex Palou, the second-year IndyCar driver who had just won his third race of the season to reclaim the lead in the championship standings.

Johnson is a seven-time NASCAR champion who doesn’t have much in the way of on-track results to show for this midlife career change to the IndyCar Series. But the intangibles he has brought to Chip Ganassi Racing cannot be measured and Johnson just might be the guy who helps push Palou through his first IndyCar title run.

Johnson left NASCAR at the end of last season as the most dominant driver of his generation. His nearly two-decade run included 83 career Cup Series victories, a record-setting five consecutive NASCAR championships, a record-tying seven overall titles and an unflappable mental focus that infuriated rivals who could never figure out how to knock Johnson off his game.

Yet there he was at Portland, an IndyCar rookie five days before his 46th birthday reminding Palou that the young Spaniard is in control of his own fate.

Palou had taken the points lead after the IndyCar season-opener, where he won his first career race in his debut with the Ganassi team. He’d not slipped lower than third in the standings all year, but an engine failure last month followed by a crash at Gateway had seen Palou’s 42-point lead vanish and he went to Portland trailing Pato O’Ward.

When his engine failed at Indianapolis while he was running fourth, Palou found Johnson to talk about overcoming setbacks. And when he was collected in a crash the next week on the oval outside St. Louis, the 24-year-old again sought the advice of one of the greatest champions in sports.

“Jimmie has been a really big help for me,” Palou said after Sunday’s win. “After the Indy road course, I sat with him and he was telling me that when he was on his NASCAR career he had moments like that and that he still won. He told me some tricks. He did the same after Gateway, and hopefully we can get a championship home.”

Johnson’s career is well documented in that he won 18 races — including three consecutive Coca-Cola 600s and a Southern 500 — yet lost four straight championships in his first four Cup seasons. Team owner Rick Hendrick eventually sat Johnson down with crew chief Chad Knaus over milk and cookies and demanded the duo quit bickering over their shortcomings and get focused on closing out a championship.

Johnson responded by reeling off five consecutive titles behind 35 wins. He developed a steely toughness. Outside distractions simply didn’t exist.

Although Palou wouldn’t share the tips he’s gleaned from Johnson over the last month, Johnson said he simply spoke of his own experiences.

“I shared some of my challenging championship moments with him as a starting point,” Johnson told The Associated Press. “Just trying to enforce the fact the big trophies don’t come without struggle and the need to overcome.”

Johnson didn’t stop there, either.

Palou has never won a major racing championship. His last titles came as a teenager karting in Spain, five or more years ago. His goal was always to make it to the IndyCar Series, but his circuitous route took him to Japan for two seasons — half the world away from where anyone had even heard of Palou before he turned up last season as a rookie with Dale Coyne Racing.

Palou was able to snag an open seat at Ganassi for his second season, joining a lineup that includes six-time and reigning IndyCar champion Scott Dixon, driver coach Dario Franchitti, a four-time series champion and three-time Indianapolis 500 winner, former Indy 500 winner Tony Kanaan, former Formula One driver Marcus Ericsson and now Johnson, who is headed to the NASCAR Hall of Fame but challenging himself in a different series at the end of his career.

Palou is surrounded by veteran leadership and seems to be treated as the earnest younger brother. He’s unafraid to pester his teammates with questions, and his only mood appears to be happy all the time, content to have finally reached his dream job in IndyCar with a powerhouse team.

That’s what Johnson focused on when he spoke to Palou after Gateway, where Palou was knocked out of the race and dropped 10 points behind O’Ward with three races remaining. The advice worked as Palou returned from the two-week IndyCar break to win his first career pole, recover from an incident in the first turn at Portland to win the race and move 25 points ahead of O’Ward with two races to go.

“I keep telling him to just be Alex,” Johnson told AP. “He’s so gifted and in the zone. He doesn’t need to try harder or think more. It’s about staying where he is and being himself. Hopefully this all makes sense?”