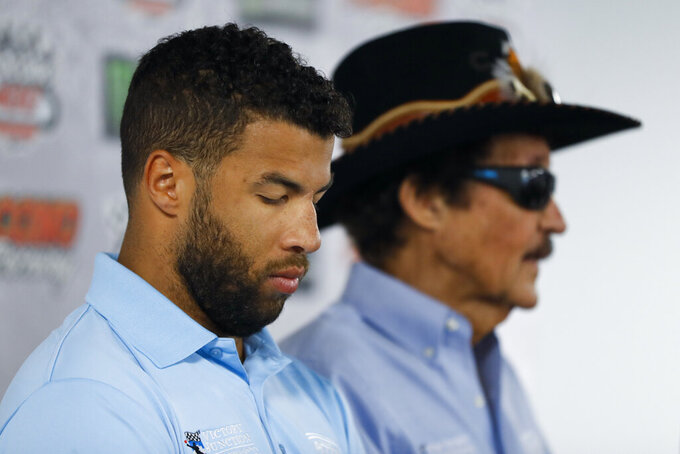 LONG POND, Pa. (AP) — Bubba Wallace fought back tears as he thanked the billionaire who decided to back him.

For a driver who long masked the pain in his personal and professional life, Wallace cut loose with genuine happiness.

Wallace has been candid about his bouts with depression, the tears and turmoil stirred from lean results on the track and strife in his personal life. Wallace wasn't sure how his family and fans would react when he recently unburdened himself to the public, his face buried in his hands and a catch in his throat as he noted with raw emotion his best, "ain't damn good enough."

What the 25-year-old NASCAR driver learned was, he wasn't alone in his fight. And his confession at Kansas Speedway touched more people than any checkered flag.

"I didn't know that was so effective on so many people," he said. "That was just me speaking out about it. Yeah, I'm going through this. That's part of it. From family to fans to crew members, just reaching out and saying, 'thanks for talking about it.' I didn't know how big of an impact it would have."

Wallace, the only black driver at NASCAR's top level, arrived in the sport hyped as a trailblazer of sorts in a series that had long lacked diversity in the field. What he found was a series of fits and starts — notably landing serious sponsorship — and a Cup career stocked with unfilled potential.

He finished second in the Daytona 500 last season in the famed No. 43 of Richard Petty Motorsports, a career highlight yet his only top-five finish in 53 career starts. While sponsorship is extremely fickle in NASCAR, series champions Jimmie Johnson and Martin Truex Jr. both lost longtime sponsors last season, Wallace had never landed the consistent cash necessary in a sport where high eight figures each season are pumped into elite teams to truly survive and thrive.

Last season, RPM had a patchwork of sponsorship deals with supermarket chains, record labels and the Air Force to stretch the 36-race season.

"I wear my heart on my sleeve and it's gotten me in trouble before, talking about certain sponsorship stuff," Wallace said. "If you can't talk about it, people won't know about it."

Wallace finally found a sponsor solution this week when the Steward Family Foundation agreed to put the Victory Junction camp on the hood for 16 races this season. David Steward is the founder of World Wide Technology, and the collaboration between WTT and the camp starts this weekend at Pocono Raceway.

Victory Junction, founded by the Petty family in 2004, is a camp for children with chronic medical conditions or serious illnesses. The 43 car was unveiled Friday at Pocono at the Adam Petty garage. Adam Petty, son of retired driver Kyle Petty and Richard's grandson, was killed in 2000 during practice at New Hampshire Motor Speedway.

Wallace smiled when he turned to The King and asked, "Are we getting new cars?"

RPM is still trying to find out how the cash flow will impact the 43 team the rest of the season. Wallace is 29th in the standings and has failed to post a top-10 finish this season ahead of Sunday's race at Pocono Raceway.

Wallace was touched that Steward, one of just four black billionaires in America, was willing to fund his ride.

Wallace added: "You've been beat down so many times. I haven't had anybody believe in me like that since I've started."

Wallace's spirits were lifted two weeks ago when he won a stage in the Open race to qualify for the non-points NASCAR All-Star race. He clipped Daniel Suarez at the finish to race his way into the All-Star field, where he finished fifth.

RPM has been understaffed and underfunded and brushed off rumors of its demise for most of the season. But Petty said the results showed why the organization continued to believe in Bubba.

"It shows that under the right circumstances, the guy is doing his job," Petty said. "If we give Bubba a decent car, then he goes out and shows his ability. What it did was, raise the bar for RPM. We know we can do it. We know Bubba can do it. We know the crew can do it."

Wallace also had fun again at Charlotte Motor Speedway, embracing friend Ryan Blaney with a bear hug. He exhaled after his first strong runs of the season.

"I've still got a lot of things to work on to be back to old Bubba," he said. "I got a couple of text messages after the Open, saying that was the old Bubba that everybody missed."

But the bad days still surface.