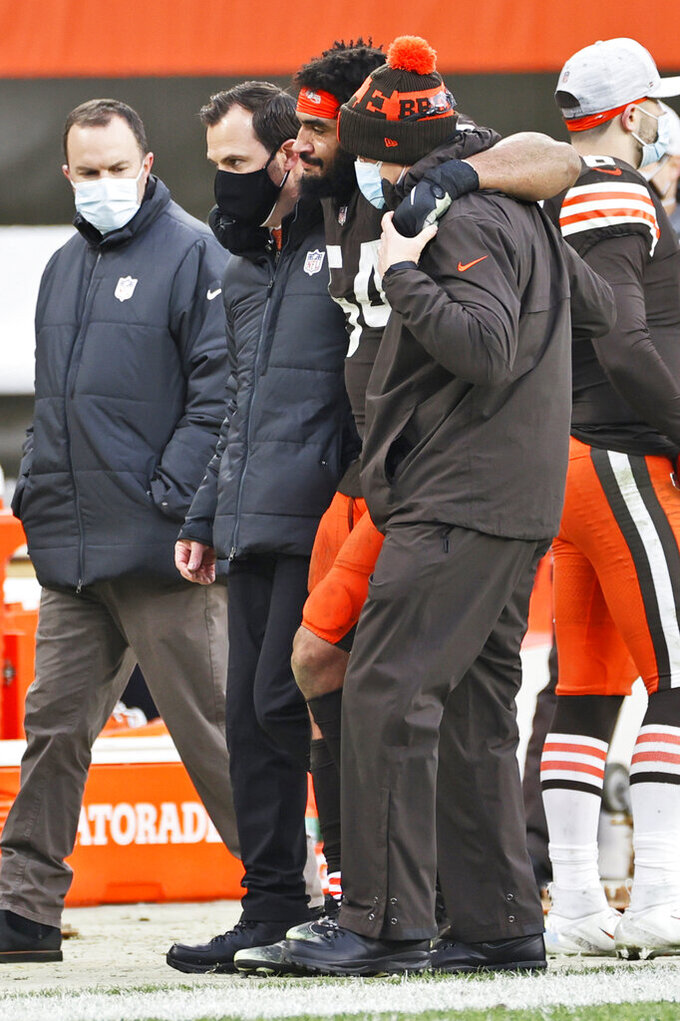 Cleveland Browns defensive end Olivier Vernon is helped off the field after an injury during the second half of an NFL football game against the Pittsburgh Steelers, Sunday, Jan. 3, 2021, in Cleveland. (AP Photo/Ron Schwane, File)

Stefanski will miss Cleveland's first playoff game since the 2002 season, and Vernon and Harris are both done for the season with their injuries.

Vernon tore his left Achilles tendon in the fourth quarter of Sunday's 24-22 win over Pittsburgh and will undergo surgery. His loss is a major one for Cleveland's defense, which could be missing more players for this week's playoff game against the Steelers.

Harris, who was pressed into playing a few weeks ago when Chris Hubbard suffered a season-ending knee injury, got hurt in a Dec. 27 loss to the New York Jets.

Harris was the Browns' top backup at guard and his loss further complicates things up front with Pro Bowler Joel Bitonio out for the team's first playoff game since Jan. 5, 2003, after testing positive for COVID-19 along with wide receiver KhaDarel Hodge.

With Harris no longer an option, the Browns could start Kendall Lamm or Michael Dunn in Bitonio's spot.

Vernon was having a solid season, getting nine sacks while playing the opposite side of the line from star Myles Garrett. The 30-year-old Vernon is in his last season under contract with the Browns, who acquired him before last season from the New York Giants in the trade that featured wide receiver Odell Beckham Jr.

The versatile Harris was a fifth-round pick this year. He played in 12 games and made one start at right guard.

NOTES: WR Rashard Higgins and rookie LT Jedrick Wills were cited for drag racing by police in Westlake, Ohio. According to an incident report and court records, the players were stopped Tuesday morning in the suburb about 10 miles from the team's headquarters. The report said a marijuana joint was “found and destroyed.” It wasn't immediately known in which vehicle it was found. A team spokesman said the Browns are aware of the incident, “gathering more information and will handle appropriately.” Wills, who was the No. 10 overall pick in this year's draft, said on Twitter that people were “Blowing it way out of proportion.” Higgins is in his fifth season with Cleveland. He had two catches for 55 yards on Sunday.