Bowman cleared to return from concussion at NASCAR finale 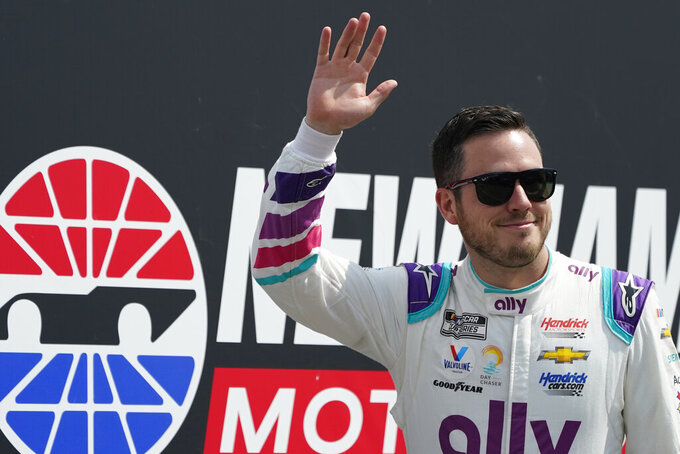 FILE - NASCAR Cup Series driver Alex Bowman waves prior to the NASCAR Cup Series auto race at the New Hampshire Motor Speedway, Sunday, July 17, 2022, in Loudon, N.H. Bowman will return for the NASCAR season finale after missing five races with a concussion suffered in a crash in the new Next Gen car. Hendrick Motorsports said Bowman will be back in the No. 48 Chevrolet next weekend at Phoenix Raceway, his home track. (AP Photo/Charles Krupa, File)

Alex Bowman will return for the NASCAR season finale after missing five races with a concussion suffered in a crash in the new Next Gen car.

Hendrick Motorsports said Bowman will be back in the No. 48 Chevrolet next weekend at Phoenix Raceway, his home track. The team said the Tucson native was medically cleared to return following a Thursday evaluation by Dr. Micky Collins, clinical director of the University of Pittsburgh Medical Center Sports Medicine Concussion Program.

Collins became a NASCAR driver favorite following his treatment of Hall of Famer Dale Earnhardt Jr. It was Earnhardt's own struggle with concussions that helped Bowman get his ride at Hendrick as Earnhardt's injury replacement.

Bowman suffered his concussion in a Sept. 25 crash at Texas Motor Speedway. The injury knocked him out of the playoffs.

“We’re thrilled Alex is 100% and will have the opportunity to race at his home track,” said Jeff Andrews, president and general manager of Hendrick Motorsports. “Throughout this process, he’s been incredibly diligent about following the advice of his doctors and prioritizing his health.”

Noah Gragson will drive for Bowman this Sunday for a fifth consecutive race. The No. 48 team had already prepared for Gragson to race Sunday at Martinsville Speedway in Virginia when Bowman's medical clearance came through.

“Due to the timing, everyone agreed it was best to stick with our plan for Martinsville and allow the team to fully prepare for Alex’s return next weekend,” Andrews said. “We’re grateful to Noah for stepping in and doing a terrific job under difficult circumstances."

Bowman and Kurt Busch are the only two drivers to miss races this season with concussions, both suffered in crashes that had been seemingly routine in NASCAR's old car. Both cars hit the wall from the rear, but the new Next Gen was built to be so durable that a large percentage of the energy in rear impacts is absorbed by the driver.

Busch has not raced since and said he's retiring from full-time competition. At least two other drivers have suspected they've had concussions.

NASCAR has been working on a fix to the stiffness in the rear of the car and, after Bowman's concussion caused the drivers to begin publicly attacking NASCAR's slow response to the issue, series leadership began meeting weekly with drivers to discuss safety concerns.

Any fixes won't be applied until next season.