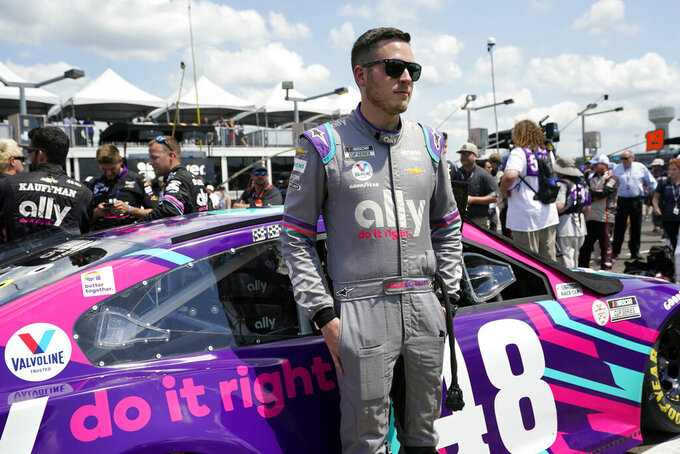 LEBANON, Tenn. (AP) — Alex Bowman looks back at last year’s return to Nashville Superspeedway as a bit of a bust.

The weekend opened just fine: Hendrick Motorsports announced a two-year contract extension with Bowman that locked him in the No. 48 Chevrolet through 2023. The deal aligned Bowman with sponsor Ally's commitment to the program.

But Ally also had gone all-in on NASCAR's return to Music City as the title sponsor of the first Cup race in the Nashville area in 37 years. Ally was all over the city as it hosted industry events at popular tourist stops, displayed stock cars on Lower Broadway, and branded its logos all over Nashville Superspeedway.

“I feel like we definitely underperformed at Nashville,” Bowman said. “It was a bummer for it being the Ally 400, so we’re all in on trying to get our race car better. Anything Ally does, they are all in on. I’m excited for all of the weekend’s activities and just trying to do our best to put on a good show.”

He heads into Sunday's race with one victory this season — Bowman won a career-best four times last year — and at ninth in the Cup standings he's currently solidly locked into the playoffs.

The pressure still exists, though, in part because of Bowman's long journey to earn one of NASCAR's top Cup rides. He drove bad cars for two years, signed a deal with Hendrick in 2016 as a reserve driver for 10 races while Dale Earnhardt Jr. was injured, and then didn't get a single start in 2017.

Hendrick put Bowman in Earnhardt's car in 2018 when Earnhardt retired, and he stayed in the No. 88 for three seasons. But when seven-time champion Jimmie Johnson said he was leaving NASCAR at the end of the 2020 season, Ally told Rick Hendrick it wanted Bowman in the No. 48.

“I’m not going to lie to you, when Mr. Hendrick told me that I was driving the No. 48, I was super nervous," Bowman said. “I didn’t know anybody at Ally yet. I just didn’t know how it was going to go. It has been awesome.”

And his season so far? Well, like all of Hendrick Motorsports, Bowman is still adapting to the Next Gen car. Hendrick collected its eighth win of the season at Nashville last year, and Bowman's win the next week at Pocono gave the organization six consecutive Cup wins.

This year the Hendrick drivers have just five wins through the first 16 races as NASCAR returns for its second season at Nashville Superspeedway following its only off weekend on the 38-race schedule.

“I don’t think we’re quite where we want to be. I think we’ve had a rough couple of weeks," said Bowman, who said NASCAR's Cup debut in St. Louis last month "wasn’t pretty for any of the HMS cars and I think we’ve got a little bit of work to do.

"I’m looking forward to seeing how we come out after the week off and the little bit of a reset we’ve had. Hopefully we’re really strong in Nashville. I think a lot can change after a weekend off, so we’ll see where we stack up.”

NASCAR rookie Todd Gilliland used the only off weekend on the Cup schedule to go racing. It paid off with a win as Gilliland made his debut driving for his father and won the Truck Series race at Knoxville Speedway.

It was a huge boost for the 22-year-old rookie with Front Row Motorsports. Gilliland's best finish this season is 15th and he's 29th in the Cup standings.

“We did kind of talk about how the Cup Series will knock you down quick," Gilliland said. “To get a win is huge. It’s kind of almost like a different mindset.”

After feeling he was making steady progress in his first few Cup races, Gilliland has now learned what a roller coaster a NASCAR season can be for a rookie.

“At the beginning of the season, it seemed like we were slowly getting a little bit better — a few spots every week,” he said. “You could just really feel the progress and then once it stalls out it’s really hard to look for any small victory at all. But I think recently we’ve been unloading faster with more speed. For a while there we were really far off when we would unload.

“Even though we haven’t really gained a ton of spots, we’ve gained quite a bit of time based on where we were at the beginning of the year."

Defending race winner Kyle Larson is the 9-2 favorite, per FanDuel. ... NBC takes over its portion of the NASCAR schedule this weekend at Nashville, with nearly 15 hours of coverage planned across NBC, Peacock and USA Network. Dale Earnhardt Jr., Jeff Burton and Steve Letarte will be the analysts for both the Cup race on Sunday and the Xfinity Series race on Saturday.