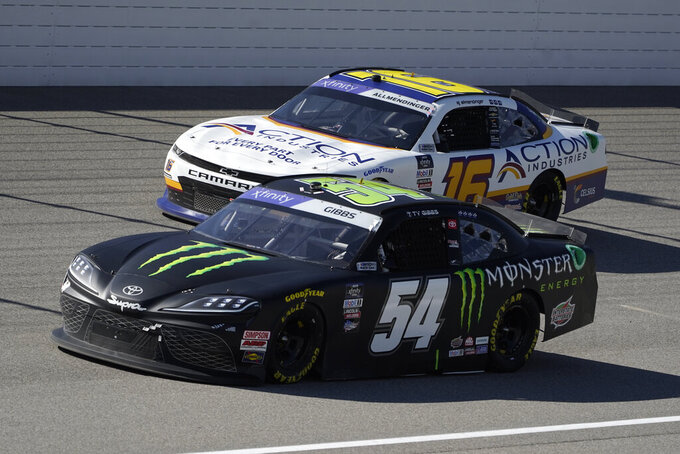 “I’ve had an awesome time on this series,” Gibbs said. “I work as hard as I can to be the best I can. I don’t really have any other hobbies.”

Justin Allgaier finished second followed by Noah Gragson, who won the pole and the first two stages at the New Holland 250.

Gibbs will start sixth on Sunday in the NASCAR Cup Series race in the No. 45 Toyota for 23XI Racing, filling in for Kurt Busch, who is missing his third straight race with concussion-like symptoms.

A.J. Allmendinger was aiming for his second straight Xfinity Series win this season and second in a row at Michigan. He led seven laps before finishing seventh. Allmendinger has a 19-point lead over Allgaier in the standings.

Gragson led 39 laps, including the last one in the second stage when he passed Allmendinger on the last turn. Allmendinger was unhappy about that and voiced his displeasure with his team on the radio.

During the second stage under caution, Gragson chose to stay on the track instead of pitting and that might have hurt his chances of winning.

“We just needed a caution at the end," he said. “The strategy put us too far back even with how fast we were all day.”

Allgaier was angry about cars that were a lap or more down getting in his way.

“They held us up and that’s annoying, especially when you see the leader pulling away," he said. “At the end of the day, it’s my job to pass them, though."

In the end, Gibbs was as good as he's been all season. No one else in the series has more than three wins.