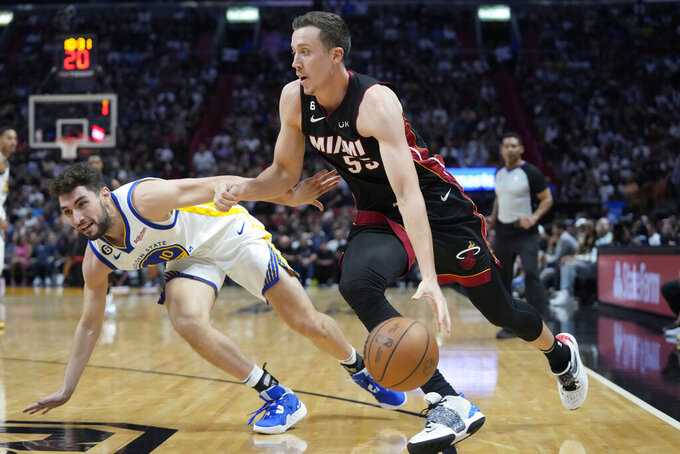 FILE - Miami Heat forward Duncan Robinson (55) drives to the basket past Golden State Warriors guard Ty Jerome (10) during the second half of an NBA basketball game at FTX Arena, Nov. 1, 2022, in Miami. The Heat and Miami-Dade County decided Friday, Nov. 11, 2022, to terminate their relationship with FTX on the same day the cryptocurrency exchange filed for bankruptcy. The building had been called FTX Arena since June 2021, and a 19-year, $135 million sponsorship agreement between FTX and the county was just getting started. (AP Photo/Wilfredo Lee, File)

MIAMI (AP) — The arena where the Miami Heat play will soon have a new name, after the team and Miami-Dade County decided Friday to terminate their relationship with FTX on the same day the cryptocurrency exchange filed for bankruptcy.

The building had been called FTX Arena since June 2021, and a 19-year, $135 million sponsorship agreement between FTX and the county was just getting started.

In a joint statement Friday night, Miami-Dade County Mayor Daniella Levine Cava and the Heat said the news regarding FTX was “extremely disappointing.”

“Miami-Dade County and the Miami Heat are immediately taking action to terminate our business relationships with FTX, and we will be working together to find a new naming rights partner for the arena,” the statement read.

FTX entered into a number of sports-related deals, including with Mercedes for Formula One racing and a sponsorship deal with Major League Baseball — whose umpires wear the company’s logo. Earlier Friday, Mercedes said it would immediately remove FTX logos from its Formula One cars.

Some of the top athletes in the world also had FTX deals, including Tampa Bay Buccaneers quarterback Tom Brady and Golden State Warriors guard Stephen Curry.

Miami-Dade County, which owns the arena and negotiated the naming rights deal, struck the agreement with FTX in March 2021. The name of the building changed from AmericanAirlines Arena to FTX Arena three months later.

The Heat were to receive $2 million a year as part of the deal. Most of the rest — roughly $90 million over the lifetime of the agreement — was to be paid to the county, the vast majority of it earmarked toward fighting gun violence and poverty.

FTX filed for bankruptcy protection on Friday, ending a disastrous few days for what had been the third-largest cryptocurrency exchange in the world when the week began. The company’s CEO and founder, Sam Bankman-Fried, has resigned.

The embattled cryptocurrency exchange, short billions of dollars, sought bankruptcy protection after the exchange experienced the crypto equivalent of a bank run.