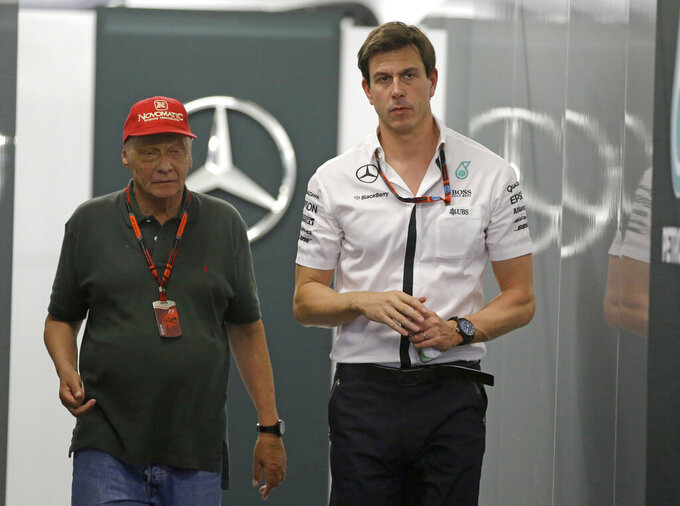 "I feel we have lost what was the heart and soul," Wolff said Thursday at the Monaco Grand Prix. "The last 48 hours were terrible. I feel like a zombie, I keep looking at the pictures (of Lauda) and find myself with tears in the eyes every half an hour because he's not there anymore."

Lauda died on Monday at the age of 70 , less than one year after a lung transplant. The Austrian won two of his three F1 titles after coming back from a horrific crash that left him fighting for his life in a burning car at the German Grand Prix in 1976.

He remained an influential figure in F1 long after his retirement from racing in 1985. He had a hugely successful partnership with Wolff at Mercedes, with the Silver Arrows dominating every year since 2014.

As non-executive chairman at Mercedes, Lauda played a key role in getting Lewis Hamilton to join Mercedes from McLaren in 2013. Under the guidance of the Austrian duo of Wolff and Lauda, the British driver has won four world titles, with Hamilton's ex-teammate Nico Rosberg also clinching one in 2016.

Wolff wore a black armband on his the left sleeve of his white shirt, as did other Mercedes staff members in the team's motorhome on Thursday.

"It's not an easy situation to try to go back to racing, especially not in Monaco with so much media attention, trying to keep it together emotionally when speaking about a friend," Wolff said, delivering his words slowly as if to contain his inner grief. "This is what matters most, what hurts the most."

The way Lauda was able to come back from his life-threatening crash had long sealed his place among the most admired drivers in F1, along with seven-time F1 champion Michael Schumacher and the late Ayrton Senna.

"He was an iconic person. What he achieved in the sport was phenomenal," Red Bull team principal Christian Horner said. "Just the most remarkable story."

After being trapped in a burning cockpit during the German GP in 1976, Lauda was read his last rites in the hospital as he fought for his life. The third-degree burns to his head and face left him scarred for life and destroyed most of his right ear, while the toxic gases from his flaming car heavily damaged his lungs. Yet just 40 days later, Lauda was back racing at the Italian GP. Given the circumstances, his fourth-place finish at Monza in '76 cemented his mythical status.

"It's so difficult for me to talk about Niki, the icon of Formula One that he was — I think the biggest icon — because my emotions are so overwhelming," Wolff said, looking into the distance. "It is one thing that the world and the Formula One community lost the biggest icon, but it is a totally different and much more difficult situation to have lost a friend."

Drivers paid their own tributes to Lauda during Thursday's two practice sessions at the Monaco GP. Hamilton had "Thanks Niki" engraved on his Mercedes while four-time F1 champion Sebastian Vettel carried Lauda's name on his Ferrari and his race helmet.