Hamlin to lead field to green at hot Nashville Superspeedway 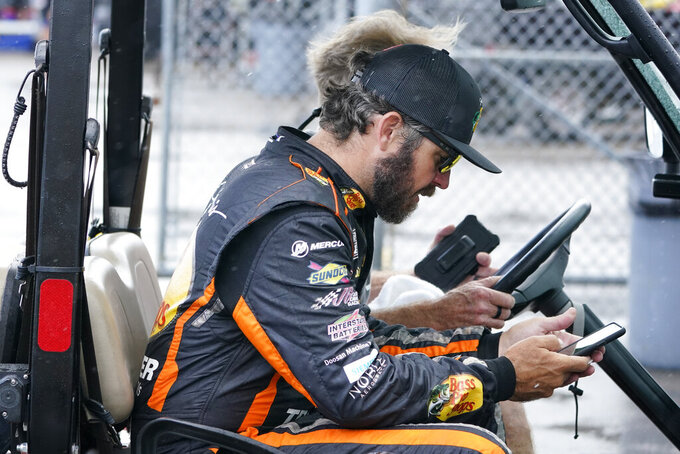 LEBANON, Tenn. (AP) — Denny Hamlin will lead the field to green at Nashville Superspeedway while debuting a heat-combating device for the first time in his career.

The Sunday forecast calls for temperatures in the high 90s, which would raise the heat inside the race car closer to 125 degrees. It likely will be the hottest race so far this season and the first true heat test of NASCAR's new Next Gen race car.

In his 17th full season, Hamlin has decided to try a “cool suit," which is a fairly new trend in racing. The system stores cold water that is circulated by a small pump to move it into the shirt tubing surrounding the driver.

“I typically don’t fight heat as much as other guys do. I don’t know why. Probably because I’ve been doing it for a decade longer than most of them,” Hamlin said. “But for the first time all year, I will wear a cool suit, simply because why not take the luxury when you’ve got it. (The heat) will be a factor (Sunday) for some, for sure.”

Hamlin was awarded the pole at Nashville when a surprise rain shower washed out the second round of Saturday qualifying. The session was halted right before the fastest 10 drivers were set for their shootout.

Hamlin got the pole in his No. 11 Toyota for Joe Gibbs Racing, alongside Joey Logano in the No. 22 Ford for Team Penske. Gibbs and Penske are two of the elite Cup organizations who have struggled some this year with the introduction of the new Next Gen stock car, an equalizer that has helped smaller teams compete.

Daniel Suarez and Ross Chastain of Trackhouse Racing both advanced to the second round of qualifying and have a combined three wins this season.

Suárez, who earned the first Cup win of his career at Sonoma this month, will start fifth. Ryan Blaney of Penske is sixth, followed by Chastain.

Kevin Harvick was eighth for Stewart-Haas Racing and followed by JGR teammates Christopher Bell and Martin Truex Jr., who announced he's returning to the team next year.

Bubba Wallace, with team co-owner Michael Jordan watching at the track, was fastest in Friday practice but briefly wiggled during his qualifying lap and will start 30th.

“I told him (Jordan) he should have stayed in the bus,” said Hamlin, who co-owns the team with Jordan. “He agreed. It’s pressure. There’s a lot of pressure when he’s out there."

Kyle Busch had the worst day of the four Gibbs drivers: Busch spun on his lap and hit the wall, and he'll start at the back of the field Sunday.

Drivers are concerned about the heat ahead of Sunday's race. Logano tried a cool shirt for the first time last race “and now I’m spoiled and don’t ever not want to have it.”

Larson recently started using “Chillout Systems” and thinks he's got the field covered when it comes to comfort in the heat.

“It works extremely good, it's honestly cold,” said Larson, who made the change to the new system because its warmer in the Next Gen stock car than it was in the older model. Larson found the cooling system he used last year is ineffective in the Next Gen.

“I needed more out of it, I turned it on and I wouldn't even feel anything,” Larson said. “So we went to this new system and I highly recommend it for all the teams out there. The first time I tried it was at a test and it was freezing.”

He had to cajole crew chief Cliff Daniels (who is suspended for the next four races because of a loose wheel on Larson's car at Sonoma) to use the new system because, Larson said, it is six pounds heavier and the added weight has to be accounted for elsewhere on the car.

“He didn't want to put it in, but it was starting to get hot and I wasn't feeling anything out of my old system, so I was able to talk him into it,” Larson said. “And yeah, it's great. So I should get a cut of any sales from here on out.”

Chase Elliott, his Hendrick Motorsports teammate, has yet to adopt any sort of cooling system and said he'd use mental toughness to get through Sunday.

“Just be outside, embrace the heat, be the heat and tell yourself ‘It’s cold,'” Elliott said. “It's about all you can do. There's a lot of options but I think embracing it and telling yourself it is not hot is the best thing you can do.”

Logano wondered if physical conditioning will come into play Sunday and drivers best equipped to handle a hot day will be in contention for the win. He said sitting inside the car is “like standing in front of a blow dryer. It’s very hot.”

When Suarez picked up his first career Cup victory, the Mexican driver celebrated by smashing a piñata shaped like a taco off the top of his Chevrolet, spilling candy all over the track surface at Sonoma Raceway.

When it came time for Trackhouse Racing to celebrate with its employees at their North Carolina shop, team co-owner Pitbull underhanded another taco piñata toward Suarez that he smashed with a bat — spilling cash all over the shop floor.

“I didn’t know that piñata had money. They told me it had something in it. I lifted it at one point and it was heavy,” Suarez said. “Thank you to Pitbull for throwing the piñata the right way because if it wasn’t for him, I was probably going to miss. But he threw it very, very good.”

Suarez teammate Chastain smashes watermelons after his wins in a tribute to his family watermelon farm, so Suarez about six week ago decided to put a piñata on his team truck for when he finally earned his first Cup victory.

“That’s a big culture thing, since I turned 1-year-old and all the way to 30, for every birthday, I’ve had a piñata,” he said.

But after smashing the piñata that Pitbull had stuffed with cash, Suarez was done reveling in his breakthrough win.

“That was the last day of celebration for me because that was the last day that I got to enjoy it with Pitbull and my team,” he said. "That night, I put it in my mind to flip the page. I enjoyed every second of it, but for me, it’s in the past. Now, it’s time to get some more.”

Toyota has resumed its popular “Sponsafier” campaign with three new commercials that launched this weekend and gave Kyle Busch his first look inside North Wilkesboro Speedway in North Carolina.

The former Cup track has long been defunct but Speedway Motorsports has renovations to begin later this year and hopes to at least land a Truck Series event at North Wilkesboro.

Toyota used brothers Kurt and Kyle Busch for a commercial entitled “Aliens,” and shot most of it inside North Wilkesboro, which will re-open in August for late-model races and then dirt races in October.

“It can be successful, and it can turn into something nice,” Kyle Busch said. “So I’m looking forward to it if they put something there. I think it would be sweet. It’d be nice to see that place come back to life, and whether it’s an All-Star Race or a Truck race or Xfinity, whatever, I think that we can make something happen there for sure.”