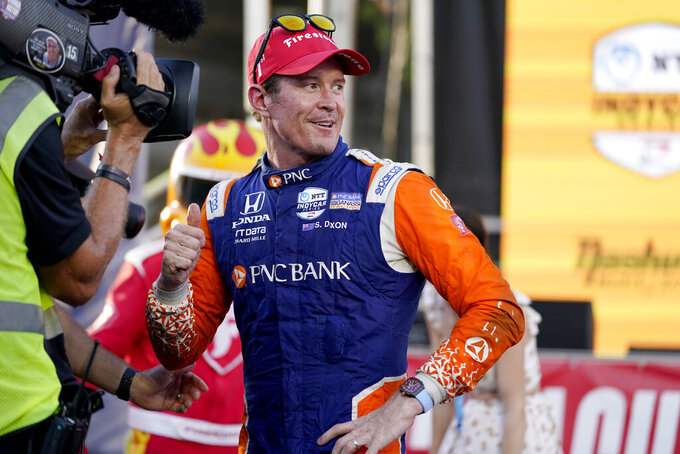 FILE - Scott Dixon celebrates after winning the IndyCar Music City Grand Prix auto race, Aug. 7, 2022, in Nashville, Tenn. Dixon knows IndyCar’s tightest championship race in nearly 20 years would have probably been long decided if not for a rare gaffe by The Iceman in the Indianapolis 500. Dixon was the dominant car at Indianapolis in May and led 95 laps until a late speeding penalty took the New Zealander out of contention. (AP Photo/Mark Humphrey, File)

MONTEREY, Calif. (AP) — Scott Dixon knows IndyCar’s tightest championship race in nearly 20 years would have probably been long decided if not for a rare gaffe by “The Iceman” in the Indianapolis 500.

Dixon was the dominant car at Indianapolis in May and led 95 laps until a late speeding penalty took the New Zealander out of contention. Chip Ganassi Racing teammate Marcus Ericsson instead won the race and, because the Indy 500 is worth double points, Ericsson was suddenly thrust into the IndyCar championship race.

But if Dixon had not been speeding, he'd have maybe scored the win, or at minimum finished higher than 21st. Ericsson received 109 points for the victory; Dixon earned just 33 in a crushing disappointment that may have ultimate implications on the championship.

Will Power is the points leader headed into Sunday's season finale, a five-driver battle that is the tightest in IndyCar since 2003 when the series was called “The IRL.” Power leads Dixon and his Team Penske teammate Josef Newgarden by 20 points. Ericsson is 39 points out of the lead, with McLaughlin of Penske in fifth and 41 points out.

Going just a touch slower down pit road way back in May would have likely sent Dixon into Laguna Seca Raceway with a sizeable lead in the standings in pursuit of a record-tying seventh championship.

“Yeah, I think had we finished even in the top-three, this championship would be pretty easy right now,” Dixon told The Associated Press. “But I can't change that. It's history. It's long gone. And you've got to move forward.”

Dixon recovered from Indianapolis to win at Toronto, where he tied Mario Andretti for second on IndyCar's wins list, and win No. 53 moved him past Andretti when he won at Nashville in August. That second win of the season moved him back into title contention, and his drive from 16th to third last week at Portland made him a serious challenger to Power come Sunday.

Should he win that title, it would move Dixon to the mystical number seven, the record mark across the top series in the world. AJ Foyt holds the IndyCar record with seven titles, Richard Petty, the late Dale Earnhardt and Jimmie Johnson won seven in NASCAR, and Michael Schumacher and Lewis Hamilton each have seven F1 titles.

Dixon doesn't even entertain the idea of joining the exclusive club.

“It's great to talk about after your accomplishments, but I've got six, I don't have seven,” Dixon told AP. “I think I like seven because it is more than six. If you look at the historical side of it, or if you look at motorsports or other sports in general, seven is definitely at the top of the heap and it would of course be very special. But I have six now and that's the facts.”

Dixon and the Chip Ganassi Racing fleet used their final test of the season at Laguna Seca, while Team Penske used its last test at Portland and went 1-2 in the race with McLaughlin and Power. It has sent two Ganassi drivers and three Penske drivers into the title decider, and the two teams have combined to win 14 of IndyCar's last 16 championships.

Ganassi is winner of the last two championships and has come out on top in 10 of the title fights, in part because of the Ganassi philosophy to race for the greater organization. They view Team Penske as a three singular efforts with the only team orders being that the best driver wins.

It's made for some tension in the Penske camp, particularly during a Pebble Beach media event for the contenders, where Newgarden seemed aloof as his rivals enjoyed their morning on the iconic golf course.

Newgarden, who has won a series-high five races this year and overcame an apparent concussion suffered in August, later revealed he's had some internal struggles this season. He's had to apologize to his crew at times, and explained it away as "an issue with trying to be a perfectionist in everything that I do.

“The more years you do this, the more you demand that excellence and perfection,” Newgarden said. "(When) it gets derailed, the easier it is to upset you. That’s been the case for me. Because I’m such a perfectionist, the longer I’ve done this, the harder it gets. If you’re a perfectionist and you do this sport long enough, and that starts to turn into an expectation that can frustrate you when it doesn’t transpire, that can be a negative.

"I felt it was a negative the way I was reacting to it, and it was just a buildup of one too many races not going according to plan was really the issue with it.”

Things seem much calmer in the Ganassi camp, even as the team remains divided over reigning IndyCar champion Alex Palou's decision to leave at the end of the season. Ganassi says he's got Palou under contract through 2023, but Palou says he's signed to drive from McLaren. The dispute is winding through both mediation and the court system.

Dixon, who is in his 20th season with Ganassi and the team's most tenured driver, does not speak to Palou and is unsure if Palou will do anything to assist him in Sunday's championship race. Ericsson does speak to Palou (as does Jimmie Johnson) and said there is no confusion over the rules of engagement at Ganassi.