De Vries to make race debut as Albon out with appendicitis 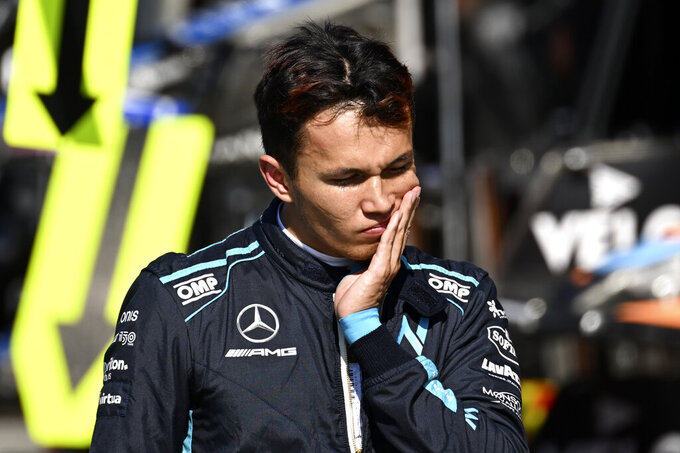 Williams driver Alexander Albon of Thailand walks on the pit lane during the qualifying session ahead of Sunday's Formula One Dutch Grand Prix auto race, at the Zandvoort racetrack, in Zandvoort, Netherlands, Saturday, Sept. 3, 2022. (Christian Bruna/Pool via AP)

MONZA, Italy (AP) — Nyck De Vries will make his Formula One race debut at the Italian Grand Prix after Williams driver Alex Albon was ruled out with appendicitis on Saturday.

Williams announced the news ahead of the third and final practice session at Monza, with qualifying to come later Saturday.

“Williams Racing can confirm that, after feeling unwell this morning and seeking medical advice from the FIA and local hospital, Alex Albon is now undergoing treatment for appendicitis,” the team said in a statement.

“Following on from this, we can confirm that the team’s reserve driver Nyck de Vries will drive in place of Alex for the remainder of the Italian Grand Prix weekend. Alex is in good spirits and the team wishes him a speedy recovery.”

The 27-year-old De Vries, a former Formula 2 and Formula E champion, had taken part in Friday’s first practice session — subbing in for Sebastian Vettel at Aston Martin — and finished 19th.

Albon was 10th and 11th in the practice sessions and Williams’ straight-line speed looked set to put him in the fight for points at Monza, with a number of drivers taking grid penalties.

The Thai driver appeared to be remaining upbeat despite surgery, as he ended a tweet with the words: “Positives — Weight reduction for Singapore, Cool scars.”