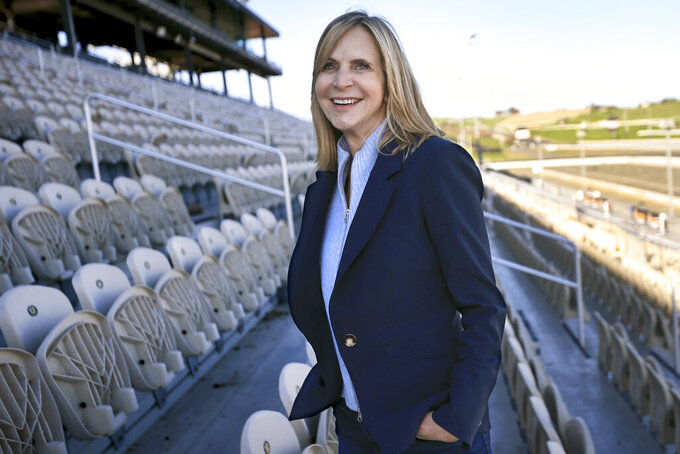 Jill Gregory, executive vice president and general manager of Sonoma Raceway, poses on Dec. 10, 2021, near Sonoma, Calif. Gregory, a Modesto native and graduate of California Polytechnic State, returned home in early 2021 to run Sonoma Raceway as the executive vice president and general manager of the picturesque road course in wine country. She'd had a longtime career with NASCAR, but couldn't pass the opportunity to go home and run Sonoma when the job opened. (Kent Porter/The Press Democrat via AP)

Kyle Larson took a swig of the winner’s wine, tilted his head back and spit it in the air. He couldn't have predicted the wind catching hold of the vino and blowing it all over new track general manager Jill Gregory.

Gregory, a Modesto native and graduate of California Polytechnic State, returned home in early 2021 to run Sonoma Raceway as executive vice president and general manager of the picturesque road course in wine country. She'd had a longtime career with NASCAR but couldn't pass the opportunity to go home and run Sonoma when the job opened.

The track was mostly shuttered in 2020 because of the pandemic and Gregory was tasked with welcoming NASCAR back just four months after she picked up her keys to the track. Ever-changing COVID-19 restrictions in both California and Sonoma County meant Gregory was constantly having to adapt — from crowd restrictions to even holding the race at all — in the lead-up to her first NASCAR weekend.

In the end, the only true hiccup was Larson's mouthful of wine that landed all over Gregory on the victory podium.

“I think I tried to jump out of the way, but then I was like, ‘Gosh, Kyle, I’m wearing my nice suit, you just got wine all over me!' " Gregory said in an interview with The Associated Press. “People asked me if I was offended, and I know Kyle, he was mortified. It was in victory lane, that's the wrap of the whole weekend, and at that moment, you are basically exhaling and things are over and fans are leaving, and the spray was quite impressive. But what actually landed on me was quite limited, so I just went about my day.”

Gregory never got the red pantsuit cleaned — she joked she hopes it someday lands in the West Coast Stock Car Hall of Fame — and Larson sent her a bottle of wine from Abreu Vineyards as an apology. She's saving it for a special occasion.

That occasion could come Sunday night after Gregory concludes her second NASCAR race weekend as head of Sonoma. Unlike last year, the track is wide open to spectators and Gregory has a full slate of action: NASCAR's truck series will race Saturday afternoon, giving Sonoma added on-track activity to what has typically been a standalone weekend for the premiere Cup Series.

The preparation hit a speedbump last week when a grass fire burned over 15 acres on Sonoma's rolling property.

“In the whole scheme of things, it was not a large fire, and it was contained within an hour of the 911 call,” Gregory said. “My thought was ‘I’d rather it happen a week before the race than the week of the race.'”

Gregory still has challenges ahead. Sonoma was once the destination race on the NASCAR schedule because of its location, casual schedule and its hold as one of only two road courses in a series packed with ovals.

But since the pandemic, when Sonoma went a year without a race, NASCAR has made major changes to its schedule and this year has six road courses on the calendar. Fans now have multiple choices where to go to see right and left turns.

And, there's competition for the local audience: The Golden State Warriors don't return home for the NBA Finals until Monday, but the San Francisco Giants are on a nine-day homestand that conflicts all weekend with the NASCAR race.

Gregory still thinks Sonoma offers the best bang for the buck, between on-site amenities, intense racing and all that Napa Valley has to offer its visitors.

“I'm of course biased, but I think we've got the best road course, location-wise and terrain-wise,” she said. "We have some unique turns, some unique elevation, it will be interesting to see how the new Next Gen car performs on this track. I think fans are thrilled about that, but there's all been a pent-up demand for NASCAR to come back.

“Even during the pandemic, we saw a lot of interest in the San Francisco market, a little south of San Francisco, and a lot has changed in NASCAR since we last raced at Sonoma. We've got an influx of new fans and we think we've got something unique to show them.”