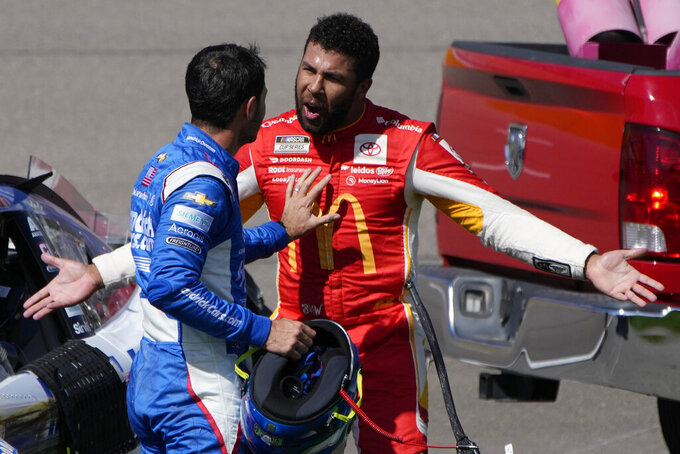 Bubba Wallace returned to NASCAR competition Saturday and said last week's one-race suspension was difficult, but he recognizes that the penalty was warranted.

Going forward, though, Wallace wants NASCAR to be consistent in officiating.

Wallace was suspended one week under NASCAR's behavioral policy for intentionally wrecking Kyle Larson, walking on a live track and then attempting to fight the reigning Cup champion. He missed last week's race at Homestead-Miami Speedway — which was won by Larson — and will return in Sunday's race at Martinsville Speedway in Virginia.

“‘Hey, I’m good with being the example if we can keep this consistent moving forward because it’s happened multiple times this year and it’s something that may continue to happen you know, for other drivers down the road.” Wallace said he told top NASCAR officials. “I definitely learned my lesson, but we have to be consistent with this no matter if it’s here at Martinsville or if it’s at Daytona or Talladega.”

Wallace termed his discussion with NASCAR “a good conversation” and said he regrets putting himself, 23XI Racing and his sponsors in a bad light.

“You have to think before you do. In this sport, it’s the heat of the moment type things that get to you," he said. “Seeing that and going back and looking at a 10,000-foot view, definitely could have handled everything way different and been in a different spot.”

Retaliation has been an ongoing issue across all three of NASCAR’s national series this season with drivers either seeking payback on the track or after in physical confrontations. Wallace’s deliberate hook of Larson was seen by most of his rivals as dangerous and over the line.

Fellow Toyota driver Christopher Bell was among the casualties of Wallace's retaliation, dropping him to last among the seven drivers battling for the remaining three spots in next weekend's championship final four at Phoenix Raceway.

Wallace expects it to be business as usual when the green flag drops and has made amends with Larson.

“I’m not coming back with a vengeance or anything like that,” he said. "I’m just going to continue to do what we’ve been doing. And for the record, I have talked to Larson and we had a great conversation this week. I think the best thing for us is we both understood where our frustrations were and moving forward and how we both can handle those situations better.”