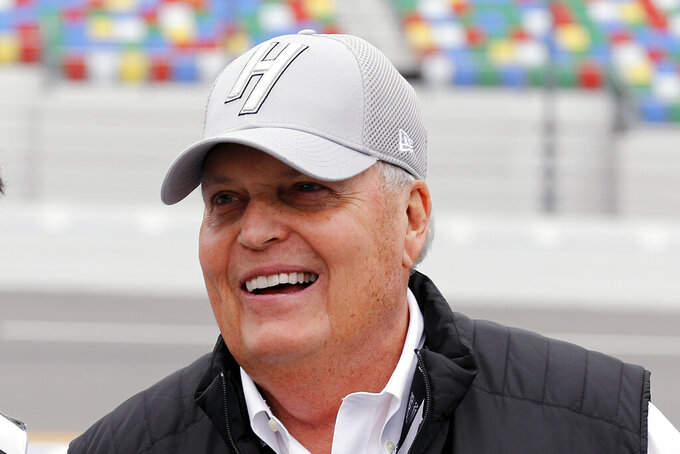 NASHVILLE, Tenn. (AP) — Hendrick Motorsports is the winningest team in NASCAR — the stock car version of the Lakers or the Celtics, perhaps the New York Yankees of motorsports.

Rick Hendrick has built a beast of an organization since he entered NASCAR in 1984. The team was called All-Star Racing and Geoff Bodine was his driver, but Hendrick went to the Daytona 500 without a sponsor.

Bodine only got the ride because he happened to stop by Hendrick’s flagship City Chevrolet dealership looking for a NASCAR ride on the same day Tim Richmond was due to tell the fledgling team if he wanted the job. Richmond had only been offered the seat because a deal between Hendrick and Richard Petty fell apart.

In the 37 years since, Hendrick Motorsports has become the winningest team in NASCAR history. HMS in May passed the record 268 Cup wins long held by the Petty Enterprises empire, and the organization is now celebrating its record-extending 14th Cup Series championship with Kyle Larson’s first title.

There are parallels to this year’s championship and that 1984 first season. Both times, Hendrick gambled and followed his gut. He didn’t have sponsors in 1984 but was willing to fund Bodine himself — a plan that worked until Hendrick was just about broke only five races into the season.

Hendrick was on the verge of folding the team until Bodine staved off the closure with a victory at Martinsville Speedway. Hendrick had let Northwestern Security Life slap its logos on the car free of charge, and the company agreed to sponsor the rest of the season after the Martinsville win.

HMS now has 280 Cup wins and its 14th title went to Larson, who was given a second chance in NASCAR this year when Hendrick ended Larson's nearly yearlong banishment for using a racial slur.

Hendrick again didn’t have a sponsor, again had to fund the car out of his own pocket and was again willing to take the chance. He knew Larson — the so-called “Next Jeff Gordon” — was going to be good when given fast race cars. He didn't expect the results to be so spectacular.

“Did I think he could win 10 races and win the championship?” Hendrick said. “I mean, I thought he’d be fast. I thought the team would be good. But I had no idea.”

Larson won 10 points races, the $1 million All-Star race, broke Jeff Gordon’s 20-year record for most laps led in a season and pretty much dominated the competition all year. The entire Hendrick organization was improved, combining for 18 victories.

All four Hendrick drivers made the playoffs; Larson and Chase Elliott, the 2020 champion, both advanced to the winner-take-all final four.

Hendrick will be celebrated this week in Nashville at NASCAR’s annual year-end celebration, his fist chance to collect the Cup in five years. He last accepted the championship trophy in 2016, the record-tying seventh and final title for Jimmie Johnson.

That championship was a final hurrah before the Hendrick juggernaut stumbled.

A painful rebuild to replace retired superstars Gordon and Dale Earnhardt Jr. left HMS with a young lineup anchored by Johnson and slowed by mediocre cars. The four-car team went three years without advancing a single driver to the championship final four, and it wasn’t until 2020 and Johnson’s final NASCAR race that Elliott closed out a late-season hot streak to win the his first Cup.

There was no party for Elliott’s championship because of COVID-19, so it won’t be until Thursday at the Music City Center that Hendrick will personally collect another Cup.

Of course, Hendrick is a car salesman and he knows a steal when he sees one.

His Chevrolets were fast again this season and his young lineup beginning to blossom. And as expected, Larson wins when he gets in fast cars. A lot.

He was unsponsored at first and it wasn't until the halfway point of the season before Hendrick inked both a full-time sponsor and Larson to an extension through 2023. The sponsor is HendrickCars.com, the clearinghouse for all Hendrick’s dealerships.

But that doesn’t make the money any less real and the bean counters at Hendrick Automotive deemed Larson a worthy spend from its marketing budget.

The end result was a full circle celebration for Hendrick and his wife, Linda, who watched all season as Larson dominated in the flagship No. 5 Chevrolet that is a tribute to their late son. The No. 5 was Hendrick's original car number, used by Bodine in the inaugural 1984 season, and driven to the 1996 Cup championship by Terry Labonte.

It had been earmarked for Ricky Hendrick, who drove the No. 5 in 22 Xfinity Series races in 2002 before an early retirement from racing. Hendrick's only son then moved to the business-side of the racing empire but was killed in 2004 along with nine others when their plane headed to Martinsville Speedway crashed into a Virginia mountain. Ricky Hendrick was 24.

The No. 5 wasn't used from 2017 through 2020, then brought back this year when Larson joined the team. The car was stylized and often in a paint scheme that was a tribute to Hendrick's late son.

“My wife and I, when we watch that car race, it just does something to us, paying tribute to our son, the number, the colors,” Hendrick said. “I love that color. I love that car. So it’s very, very special to be able to win that and celebrate his colors, his number and his life.”