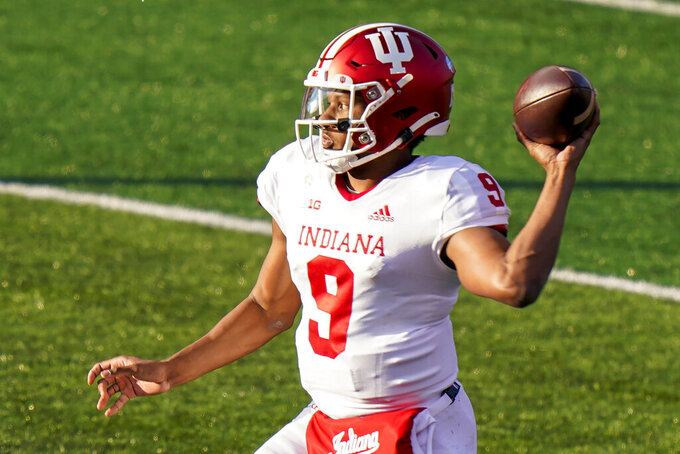 FILE — In this Oct. 31, 2020, file photo, Indiana quarterback Michael Penix Jr. throws a pass during the second quarter of the team's NCAA college football game against Rutgers in Piscataway, N.J. Penix is back from a season-ending knee injury as the team returns to play this season. (AP Photo/Corey Sipkin, File)

INDIANAPOLIS (AP) — Indiana quarterback Michael Penix Jr. is cashing in before he goes under center for the team's season opener Saturday at No. 18 Iowa.

It's the first time a motor sports league has paid prominent college players to help sell tickets, and it plans to add others from campuses near each of this year's seven remaining events — thanks to new NCAA rules allowing athletes to profit from their names, images and likenesses.

“We wanted a school in close proximity to the event and individuals with strong and engaged social followings who represent this community in a positive manner," NHRA vice president of marketing and communications Jeffrey Young told The Associated Press. “We wanted to deliver the excitement of an NHRA event through a quick-hitting, attention-grabbing video."

Penix is in good company this weekend.

While Durr, Leal and Capobianco have been invited to attend the series' only Indy stop this season, Penix, Fryfogle and Wracher will be busy trying to help No. 17 Indiana protect its first preseason ranking since 1969.

“I feel like this year, U.S. Nationals has a broader sense of prestige than it did last year because we haven't raced here in a full year, where last year we raced here two weekends before," she said. “So this year, is really kind of the homecoming, I think, for U.S. Nationals where maybe we'll call it the prom last year."

Getting Penix on board is a win for the NHRA.

Coach Tom Allen said that despite balancing rehab, football, classwork and now branding, Penix has hardly been distracted by the endorsement.

“He’s doing more than he’s ever done in regards to every time we had a special teams period or a different type of period he was always with the training staff doing extra work," Allen said Monday. “He’s right where we hoped he would be and he’s 100% ready to be the starter on Saturday."

Senior associate athletic director for strategic communications Jeremy Gray said school officials do not negotiate or approve contracts, though athletes are to disclose deals within a 10-day window and are encouraged to seek legal advice so they understand contract language and implications.

“We've encouraged them to profit off of their names, images and likenesses," Gray said. “Coaches are not involved, but I think our coaches would basically say do whatever you need to do as long as you don’t embarrass yourself or the program — and be at practice on time."

When it appeared NIL changes were coming last year, the company introduced Opendorse Ready, a product that helps advertisers contact athletes directly. Indiana was the second school to sign up, after Nebraska.

Indiana's athletes seem to be benefiting.

And now on college football's first full weekend, Fryfogle, Wracher and Penix also will be cashing in — as they face the Hawkeyes.

This story has been corrected to show that the last of the 2020 Top Fuel runner-up is spelled Pruett, not Pruitt.