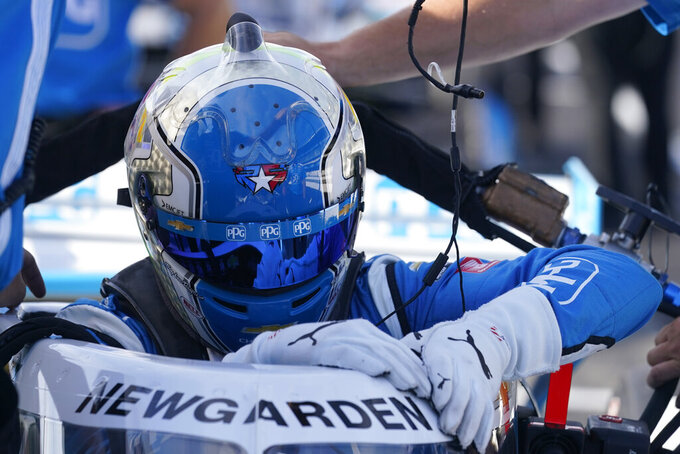 Josef Newgarden climbs into his car during a practice session for a IndyCar auto race at Indianapolis Motor Speedway, Friday, July 29, 2022, in Indianapolis. (AP Photo/Darron Cummings)

He ignored the cell phone, avoided social media and spent 48 hours resting, hopeful it would help him recover from the head injury he suffered last weekend and stay in the IndyCar championship hunt. Now all he needs is another strong finish Saturday at Indianapolis Motor Speedway.

“It was going to take an Army to keep me away from here,” Newgarden said. “I knew if we weren’t in this race it was going to be very difficult to stay in this championship fight. I knew we had to be in the race."

Newgarden's availability became uncertain after the suspension on the No. 2 Chevrolet apparently broke, sending the race leader spinning hard into the wall at Iowa. Doctors examined and cleared Newgarden at the infield care center, but he later collapsed in his motorhome and struck his head hard.

The Tennessean was then airlifted from the track to a nearby hospital to avoid post-race traffic and additional tests came back negative. On Tuesday, Newgarden informed Team Penske president Tim Cindric he was ready to race.

Newgarden even had some fun with the situation.

He donned a black, padded helmet-like device as he walked gingerly down two steps from the team hauler with reporters and was wearing a microphone for their YouTube show. Newgarden won't use any additional padding during the race.

Following three qualifying rounds, Newgarden said he didn’t feel light-headed before passing out, didn’t know the cause, was not officially diagnosed with a concussion and did not suffer typical concussion-like symptoms such as sensitivity to light.

But with Team Penske also in contention for the team title, Cindric couldn't take any chances.

He chose Santino Ferrucci as a standby driver and the two drivers exchanged some friendly banter Thursday on Twitter. That left just one lingering question: Could Newgarden get the all-clear in time for qualifying?

“It all seems like business as usual," Cindric said between Friday's sessions. "Nothing to report. That process is going to take care of itself. Nothing you can do there except hope and have a plan.”

Newgarden didn't miss a beat, though.

He posted second-fastest lap in practice, passed the exam and then advanced easily through the first two rounds of qualifications before finishing one spot behind teammate Will Power, the 2014 series champ and 2018 Indianapolis 500 winner.

The only thing preventing him from a better starting position were tires.

“I felt like on new tires we had full pace but on used tires, we lacked some of the pole pace we needed,” Newgarden said. “So I think we’re going to try and clean that up, make sure we have good (tire) degradation for tomorrow.”

Now, the focus for both Penske drivers is closing the gap — and perhaps overtaking — points leader Marcus Ericssson.

The Swedish driver, who won the Indianapolis 500 in his last trip to the Brickyard, will start from the back of the 25-car field after a mechanical problem with Chip Ganassi Racing's No. 8 Honda brought out a red flag in the first round of qualifications.

Six-time series champion Scott Dixon, Ericsson's teammate, came into this weekend tied with Newgarden for third. But Dixon will start from the No. 20 spot.

Newgarden, meanwhile, has a series-high four wins this season but own only one Indy win at the series highest level — in 2020 on the road course. If he claims victory No. 5 on Saturday, it could put him atop the standings and cap a remarkably quick comeback.

“I was very motivated to get back. I don’t think you could give me extra motivation," Newgarden said. “I’m always as motivated as I need to be and that’s how I felt coming into this weekend — whatever I’ve got to do, I’ll do. I’m just ready to be in the fight.”