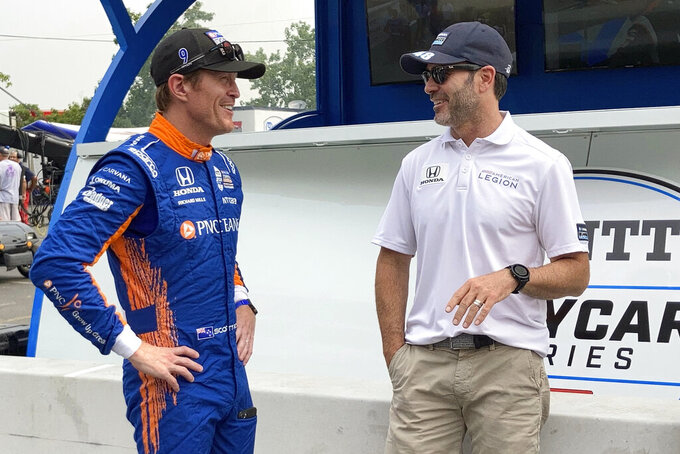 Jimmie Johnson moved one step closer to adding the Indianapolis 500 to his IndyCar schedule with a successful test on his first oval.

The track was familiar — Johnson has a record seven victories at Texas Motor Speedway — but the sensation of speed was totally different. The 45-year-old IndyCar rookie hit an average speed of 214 mph, a mark that would have qualified him fourth for the 2020 race at the 1.5-mile speedway.

“It was quite significant to start, so low in the car, vision is somewhat limited, just how quick the car responds to steering wheel input was pretty new and different for me,” Johnson said Tuesday, a day after his test at Texas.

He went to Texas with a full support staff from Chip Ganassi Racing, where driver coach Dario Franchitti and current teammates Scott Dixon and Tony Kanaan were there to guide Johnson through the day. The trio has a combined five Indianapolis 500 victories and Dixon, a five-time winner at Texas, was already in the No. 48 preparing to shake it down for Johnson when he arrived at the track at 5 a.m.

“There’s only so much you can do with an oval, but the awareness of the banking and how to support the IndyCar with the banking was a little different for me, and my NASCAR line had me a little wide on corner entry and exit. And Dario and Scott, I got their attention a couple times with my wide entries and had to bring that in,” Johnson said. “But once I kind of understood what to look for and how quickly the car would turn, I got into the flow of it pretty easily.”

Johnson entered IndyCar this season adamant he'd never run on an oval, largely because of safety concerns and a promise he made to his wife to stick only to road and street and courses. IndyCar's last two fatalities, Dan Wheldon in 2011 and Justin Wilson in 2015, were in crashes on ovals and the day after Wheldon's death Johnson had called on the series to drop all ovals from its schedule.

Robert Wickens, meanwhile, suffered a severe spinal injury in a crash at Pocono in 2018 that has left him in a wheelchair.

The risks made it easy for Johnson to build his IndyCar program around only the road and street courses, with Kanaan driving the No. 48 in the four oval races this season. That's the deal both drivers are committed to through next season. But as Johnson fully immersed himself in the series, he quickly had the urge to at least test an oval.

He's cited the safety advances in IndyCar, including last year's introduction of the cockpit-protecting aeroscreen, as reason to reconsider his decision.

Romain Grosjean, who moved from Formula One to IndyCar this season, also left ovals off his schedule this season but found himself missing the competition so much as he watched the Indy 500 on television that he ran the oval at Gateway this month. Grosjean is now on the cusp of moving to Andretti Autosport next season to run the entire IndyCar schedule, ovals and all, and Johnson seems headed to his own expanded schedule.

“I’m definitely a step closer. I think that there are more conversations to be had with family, team and sponsors, at least another test session ahead of me before I can really make a decision,” said Johnson, “but driving the car only piqued my interest more.”

There are several wrinkles to work through, including sponsorship for additional races for Johnson, as well as the Ganassi personnel required for both Johnson and Kanaan to run at the same time.

And then there's his wife and two daughters, who Johnson has routinely cited as the reason he wouldn't race ovals. He said Tuesday he regrets now pinning the decision on his family.

“I hate that I’ve joked about it over the years that it’s my family. My family is looking directly at me and my comfort,” he said. "The Indy car that we have today versus where it was five years ago is just totally different. Yes, there will be conversations, and I guess ultimately I’m trying not to say that it’s on my family and the pressure that comes with that.

Johnson's next step is an October test at Indianapolis Motor Speedway, and he acknowledged Tuesday that the steps he's taking are right now just “a pathway to Indy” and not the entire oval schedule.

“There’s still so many hurdles between now and one event that to look at the others is tough at this point,” he said. “I will need to face that decision and that opportunity in the somewhat near future, and we’ll just see how this next test session goes and really how everything aligns.”

And he stressed he still must test the car at Indy to work through the nuances from 20-plus years of driving a stock car in circles to now handling a lighter, faster Indy car.

“In NASCAR you go fast by being on the ragged edge and having the car sideways, and I’m quickly learning and understanding that in an Indy car, you don’t set the car up to drive it there,” he said. "That’s been a pretty big eye opener for me. In the Cup car in some respects, although you’re going slower, you’re on that ragged edge.

“My perception was I need to drive it like a NASCAR and just hang on, hold your breath every single lap, and directionally that’s not how you go fast in Indy cars. I need to go experience that at Indy. I remember watching qualifying all these different years and just holding my breath for these guys — I need to go experience that and see what that’s like for myself before I can make that decision to run in the race.”