Herta to replace injured Pastrana in Race of Champions 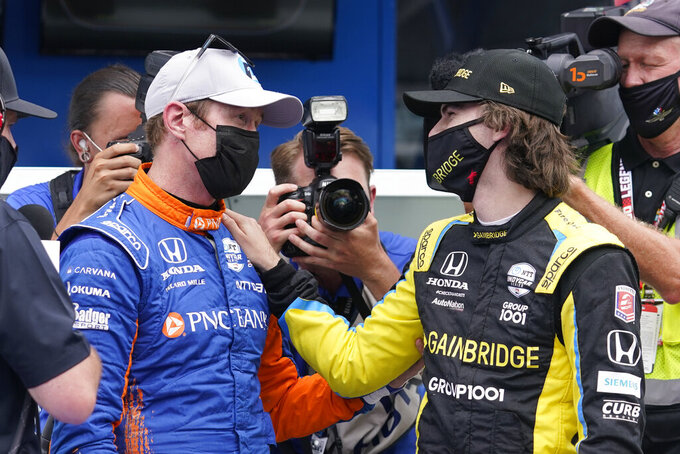 FILE - Scott Dixon, of New Zealand, left, talks with Colton Herta after Dixon won the pole for the Indianapolis 500 auto race at Indianapolis Motor Speedway, Sunday, May 23, 2021, in Indianapolis. Dixon and Herta are two of 12 IndyCar drivers taking part in the Rolex 24 at Daytona to knock off some offseason rust ahead of their own season opener next month.(AP Photo/Darron Cummings, File)

DAYTONA BEACH, Fla. (AP) — Colton Herta will represent the United States in next weekend's international Race of Champions as the replacement for injured driver Travis Pastrana.

Pastrana said this week he broke his back and hip in a BASE jumping accident.

Herta will take his place alongside seven-time NASCAR champion and current IndyCar driver Jimmie Johnson. The ROC “Snow + Ice” World Final will be held next weekend in Pite Havsbad, Sweden, on the frozen Baltic Sea, 60 miles south of the Arctic Circle.

Herta's father, Bryan, told The Associated Press his 21-year-old son spent part of this week researching the warmest jacket to pack for the venture. He will compete for the “Champion of Champions” title in individual ROC competition, and join Johnson on Team USA in the ROC Nations Cup.

“You ready for some racing in the snow?” Johnson tweeted to Herta on Friday.

Herta said this is “not the way I wanted to be drafted” into his first Race of Champions.

“What an amazing opportunity to join Race Of Champions for the first time,” said Herta, a six-race winner through his first three seasons in IndyCar. “It comes with sorrow as I fill in for Travis, and I wish him a speedy and full recovery.”

Both Johnson and Herta are racing this weekend in the Rolex 24 Hours at Daytona. Herta will be in IMSA’s LMP2 class for the event for the first time in his short career.

The budding star has said he wants to try as many different forms of motorsports as possible and Herta was in position to move to Formula One if Michael Andretti had been successful last year in purchasing a team.

Johnson teamed with Jeff Gordon and MotoGP star Colin Edwards in 2002 to win the ROC Nations Cup title in Gran Canaria, Spain. It was Team USA’s last title in the international event in which top racers from around the world face off in a winner-take-all competition.

It was considered an upset victory as Johnson and Gordon became the first NASCAR drivers to win the ROC Nations Cup. They beat defending champion Team Spain and the win opened ROC Nations Cup to more American participation.