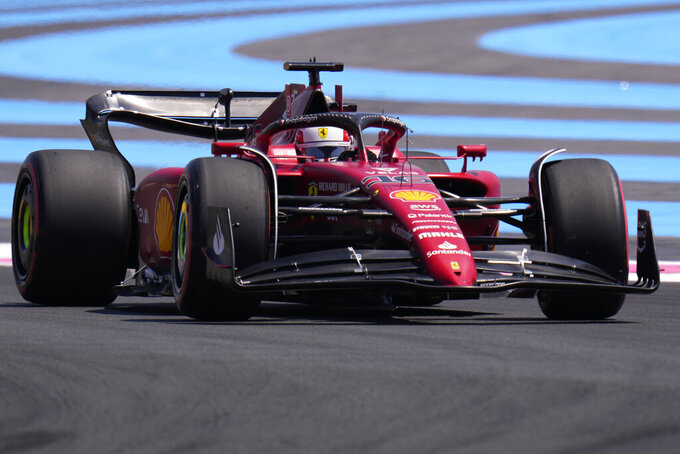 Ferrari driver Charles Leclerc of Monaco steers his car during the first practice for the French Formula One Grand Prix at Paul Ricard racetrack in Le Castellet, southern France, Friday, July 22, 2022. The French Grand Prix will be held on Sunday. (AP Photo/Manu Fernandez) 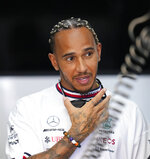 PARIS (AP) — Lewis Hamilton enters his 300th Formula One race at the French Grand Prix this weekend in the uncustomary position of chasing his first win of the season.

The seven-time world champion holds the F1 record with 103 victories and 103 poles, but the 37-year-old British driver also shares two records with fellow great Michael Schumacher: seven world titles and winning at least one race in 15 straight seasons. Schumacher won every year from his 1992 F1 debut through 2006, while Hamilton has one every year since his 2007 series debut.

But Hamilton is winless through the first 12 races of this season. He is inching closer to the top of the podium after three straight podium finishes since Mercedes ironed out ongoing issues with bouncing. F1 races Sunday in the French Grand Prix.

“It’s been really positive to have some consistency. We’re constantly adding performance, we’re constantly progressing and there’s a lot to come,” Hamilton said. “In the last race (in Austria) we were only a few tenths (of a second) off the lead guys in qualifying.”

As for standout moments in his illustrious career, Hamilton selected his first F1 win in 2007, his first title in 2008, and winning on his home track at Silverstone.

“The whole realization of reaching your dream is a very, very surreal experience and it is always going to be your first,” Hamilton said. “The amount of sleepless nights as a family that all of us had had, not knowing whether or not we would actually reach our goal, reach our dream, but never giving up.”

There have been intense rivalries, including last season when Red Bull star Max Verstappen clinched the title in the controversial season-ending Abu Dhabi Grand Prix. Hamilton also suffered a bitter defeat to Mercedes teammate Nico Rosberg in 2016 and some tussles with Fernando Alonso in 2007 with McLaren.

When Hamilton faced Alonso, the Spaniard had already won his two F1 titles. He calls Alonso his toughest opponent "out of pure pace, I always say it’s Fernando.

"We had some good battles, I wish we could have more," Hamilton said. “I remember the task of being alongside Fernando when I was 22. I was so young mentally and of course, OK in terms of skill, but it’s a lot of pressure to go against a great."

“He has been a tremendous driver and a legend. Back then probably no one thought that someone will be able to win seven titles like Michael,” Alonso said. “Congratulations for the 300 and hopefully another win soon.”

Sainz's engine caught fire near the end of the last race in Austria two weeks ago, forcing his fourth DNF this season. Sainz was handed a 10-place grid penalty because Ferrari changed the power unit for this weekend.

Ferrari is seeking a third consecutive victory following Sainz's win at Silverstone and Leclerc's drive to victory in Austria.

It was Leclerc's third win of 2022 and ended a dismal run of five races without a podium finish that had been coupled with frustrating team orders.

“It feels good, I’ve got a much better feeling than I had coming into Austria. We just need to keep the focus, that level of performance," Leclerc said. "We’ve been very strong for very long now but unfortunately we had quite a bit of problems. But I’m confident we can be quick this weekend.”

Mick Schumacher is on a roll after 31 races without scoring a single point. He's now headed into Sunday seeking a third-straight points finish.

The 23-year-old German feels the pressure has been lifted amid a difficult season. He was criticized by Haas team principal Guenther Steiner following a May crash in Monaco, then a 14th-place finish in Azerbaijan and another DNF in Canada.

Suddenly he was facing questions about his future in F1.

But the son of Michael Schumacher responded by finishing eighth at Silverstone to score the first points of his career, then he was sixth two weeks ago in Austria for back-to-back points-scoring finishes. He showed increased confidence in both races and went wheel-to-wheel with world champions Verstappen and Hamilton.

Schumacher feels more comfortable in the car than earlier in the season.

“It’s just a matter of being consistent with what we’re doing. I think we always pretty much start off with a good set-up,” Schumacher said.

Four-time F1 champion Sebastian Vettel, a family friend, was driving behind Schumacher at Silverstone and cheered him on from inside his car.

“I think Mick is on the right track . . . it's great for him to show what he’s capable of," Vettel said. “He had an unlucky start to the season. “

Vettel seems keen to extend his stay at Aston Martin.

His contract runs out at the end the year and, with an increasing commitment to environmental issues weighing on his mind, observers have questioned whether he will continue.

“I think there is a clear intention to keep going and we’ll see soon where we stand," Vettel said. “I’m talking to the team.”

The 35-year-old German driver has a best finish of sixth place in Azerbaijan.