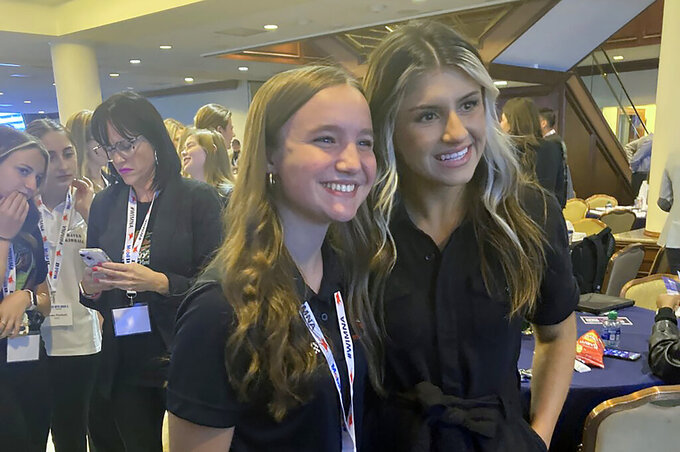 NASCAR driver Hailie Deegan, right, poses with 15-year-old Katie Hettinger, a Michigan racer who had just been announced as a participant in the Drive for Diversity combine, at the Women in Motorsports convention at Charlotte Motor Speedway in Concord, N.C., on Oct. 6, 2022. (AP Photo/Jenna Fryer)

Hailie Deegan lives some eight miles off the main road in a house stripped of its address — a deterrent to a persistent stalker who managed to locate her even after the purchase of her first home.

He hid in the brush across the two-lane road from the house. The situation with the obsessed fan became public earlier this year when Deegan skipped an April race in Florida because of alleged death threats against her boyfriend.

So Deegan has learned how to protect herself, to document any unusual communications and to be aware of her surroundings. She's used NASCAR security as well as private security at races, but the 21-year-old Truck Series driver doesn't have the financial budget for a regular detail, so she's handling it on her own.

Her house has a security system, and she says she's equipped with guns that she knows how to use.

Chase Cabre, who like Deegan came through NASCAR's driver development program but didn't begin dating Deegan until those lonely early days of the COVID-19 lockdown, lives with her, and his brother is often around. Her uncle and his new wife recently moved from California into Deegan's house.

Even without the address posted on the property, Uncle Sonny made sure passersby wouldn't miss the house: he dug a full dirt track into her front yard that features an on-off, three consecutive bowls, a gap jump with an over-under, a tabletop, and plenty of twists and turns.

You want to find Deegan? She's probably on her Can-Am Maverick X3 tearing through the front yard and making content for her YouTube page that has half a million followers. She boasts 1.2 million followers on Instagram and with Cabre as her social media manager, the couple typically devotes two days a week to creating content for NASCAR's only female driver racing full-time at the national level.

Deegan is savvy and understands impressions, brand value and navigating the aggressive motorsports financial landscape in which a driver must be both talented on the track and usually also able to secure funding for a race team.

“Nowadays is so hard in racing, no matter how good you are, what you do, there's always going to be someone with more money at their fingertips, waiting to buy a better seat,” Deegan told The Associated Press on a day spent with her at her North Carolina home.

“And dammit, no matter how hard you work, it sometimes doesn't make any difference because there's somebody who has more money.”

So here she is headed into the final Truck Series race of the year Friday night at Phoenix Raceway without plans for 2023 announced. Deegan is a Ford development driver and has spent the last two seasons at NASCAR's third-tier national series racing trucks for David Gilliland.

Gilliland is moving his program to Toyota next season, and even though Deegan started her career with Toyota, there's no spot for her in the move.

Deegan's future isn't actually in doubt, at least not according to Ford.

She has a sponsorship package from Monster Energy, which has also sponsored her father, Brian, the most decorated freestyle motocross rider and X-Games superstar. But it's not enough money, so Deegan acquires personal deals and uses social media to draw in sponsors.

Her strategy is deliberate and creates the statistical data she can present to potential backers as proof of her value.

Deegan's social media presence can be a stronger sales point than her on-track results: Deegan in two seasons in the Truck Series has three top-10 finishes in 44 starts and has yet to lead a lap. She's failed to finish seven times because of crashes, and fault rarely matters.

“I know mistakes are made, especially at the Truck Series level, but I get really, really mad about it,” Deegan told The AP. “Because I know how hard we worked for that money. And when I am having a good day and running well and get wrecked, I know what that means in the sponsors' eyes.”

“She did exactly what she needed to do. She had a good car, a good team around her and she had the right approach and the right preparation,” said Mark Rushbrook, global director of Ford Performance Motorsports. “She drove a really good, smart, solid race, and that's exactly what we wanted to see out of her.”

Rushbrook wouldn't comment on 2023 for Deegan beyond saying she “will definitely be in a Ford racing something next year.”

Deegan would love for it to be an Xfinity Series ride after two frustrating seasons in Trucks. After her Las Vegas debut, Deegan looked directly into a live television camera and made her pitch: “If anyone is out there who wants to pay the bills, I am more than happy to race more Xfinity races."

The line snaked across the ballroom floor of the Speedway Club at Charlotte Motor Speedway as women of all ages lined up to meet Deegan, who made an appearance at last month's Women in Motorsports convention.

Waiting to speak to Deegan was 15-year-old Katie Hettinger, a Michigan racer who had just been announced as a participant in the Drive for Diversity combine. Deegan had gone through the same process and Hettinger hoped to ask for advice.

Hettinger never got the chance. As soon as Hettinger told Deegan she was going to the combine, Deegan launched into the nitty-gritty. She told the younger racer what to expect and stressed, multiple times, “just make sure you stand out. Make sure they know who you are before it is over.”

Deegan is approachable, and like Danica Patrick, she's also attractive. She doesn't avoid the path Patrick took early on of leveraging her looks to fund her racing, and perhaps that's how Deegan landed her scariest stalker to date.

Deegan had received her share of odd attention and aggressive fandom over the years, but nothing like a nearly yearlong case in which a man claimed he'd been sent to save Deegan from an abusive Cabre. Deegan says the man has been “catfished” into believing he has a relationship with her, and when his social media interactions escalated this year into him showing up at the team shop, the California girl had to learn how to play detective and North Carolina's laws.

Deegan says she has a restraining order in place. The experience has not made her scale back her visibility.

She takes pride when racers like Hettinger approach her and hopes her career ascends to the point where she can inspire many more.

“I love seeing other little girls come into racing, and older men come up to me and say ‘I got my daughter into racing because of you, because I saw that you were able to do it and show there is a hope and a future,'” Deegan said. “Little girls come up to me when I am at the dirt track, telling me how they watch my YouTube videos so they can see how I drive, and how I act.

“I'm not perfect, but at least they are watching.”