Fans in the stands for IndyCar in Iowa, with some reassigned 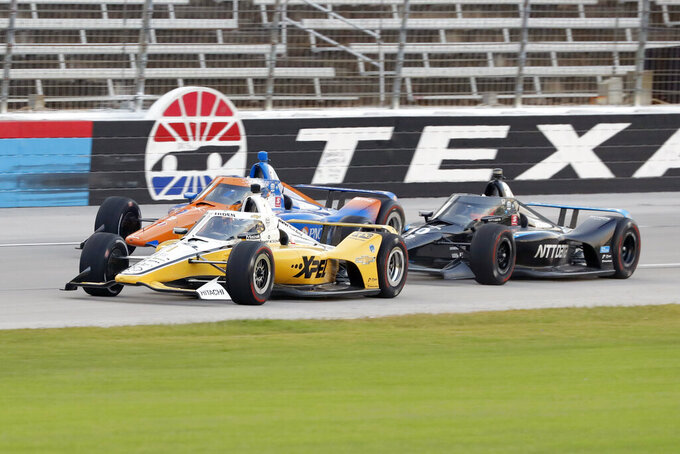 NEWTON, Iowa (AP) — There will be spectators in the stands at Iowa Speedway for two IndyCar races next month, with some fans who have already purchased tickets being moved to different seats.

IndyCar said Thursday that a limited number of tickets will be available for the races at the short oval July 17 and 18. It could be the second weekend in a row when the open-wheel series has spectators for its races.

About 5,000-6,000 tickets will be available each night at the Iowa track that is just under a mile long and has more than 25,000 permanent seats. Groups will be separated by at least six feet in order to align with state guidelines for COVID-19.

There were no fans in the massive grandstand at Texas when IndyCar opened its pandemic-delayed season there June 6, and no spectators will be allowed at the next race on the road course at Indianapolis Motor Speedway on July 4. Tickets are being sold for races July 11 and 12 at Road America, a four-mile, 14-turn road course in Wisconsin where fans can more easily be spread out.

All previously purchased tickets for the Iowa race weekend will be honored, including season tickets. But seating will be reassigned for all existing ticketholders in order to follow safe social distancing guidelines.

Iowa is racing in its originally scheduled spot this season, though a second 250-mile race was added there as part of several adjustments made to the IndyCar schedule. Texas, which was supposed to be the ninth of 17 races, was held on its original date as the season opener. There will also be a doubleheader at Laguna Seca Speedway in California in September.

Races were canceled at Long Beach, California, Barber Motorsports Park in Alabama, Circuit of the Americas in Texas and a planned doubleheader in Detroit. The race in St. Petersburg, Florida, that was supposed to be the season opener March 15 is now set as the finale Oct. 25. The Indianapolis 500 was postponed from its traditional Memorial Day weekend slot and is now set for Aug. 23.

There will be enhanced hygiene and safety precautions for all fans at Iowa. All guests will be screened in their vehicles with contactless temperature checks before entering the parking areas and only essential racing personnel will have access to the infield. Hand sanitizer and face coverings will be distributed to each guest when they enter the track, and enhanced cleaning and sanitizing procedures will be implemented throughout the facility over the course of the weekend.