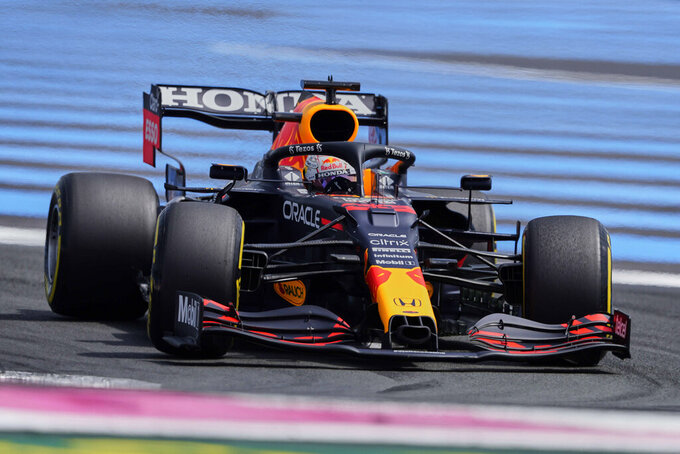 Red Bull driver Max Verstappen of the Netherlands steers his car during the first free practice for the French Formula One Grand Prix at the Paul Ricard racetrack in Le Castellet, southern France, Friday, June 18, 2021. The French Grand Prix will be held on Sunday. (AP Photo/Francois Mori)

The Red Bull driver narrowly headed off Valtteri Bottas and his Mercedes teammate Lewis Hamilton at the Paul Ricard circuit in southern France.

“It’s been a good end to the day and we improved quite well," Verstappen said. “This afternoon, the car felt a lot better and a lot more connected. It’s still really difficult around here as the track is so open and it’s quite windy, which means it isn’t always easy to nail the lap.”

After damaging a part of his front wing early in the afternoon session, Verstappen found the pace to finish only .008 ahead of Bottas and .253 clear of Hamilton.

Two-time F1 champion Fernando Alonso was an impressive fourth for the French-owned Alpine team, which was formerly Renault, while Charles Leclerc was fifth for Ferrari.

The top three were the same for both sessions, but in a different order.

Earlier in the day, Bottas overcame a poor start to top P1 from Hamilton and Verstappen. This came after some early trouble when Bottas bounced over kerbs and appeared to damage the front wing on his car.

But he recovered to post the best lap, .335 ahead of Hamilton and .432 clear of Verstappen.

Soon after Bottas had his mishap, four-time F1 champion Sebastian Vettel lost control of the rear of his Aston Martin and slid backward off the track into the crash barriers.

Ferrari's Carlos Sainz Jr. slid off late in the session, just as Verstappen lost top spot on the leaderboard, while three other drivers also had trouble with grip and went off track.

“The wind is also quite gusty so one lap it feels alright and the next lap it can increase,” Verstappen said. “It’s not always easy to judge your corner speeds.”

There is a third practice on Saturday followed by qualifying.

“I expect it to be very tight,” said Verstappen, who has one pole position this season compared to two for Hamilton, the F1 record holder with 100.

Verstappen leads the championship by four points ahead of Hamilton after six races of an exciting season so far.

Verstappen could have both extended and lost his lead at the action-packed Azerbaijan GP two weeks ago. He was leading with Hamilton third when his tire blew near the end and he scored no points. That should have gifted Hamilton a sizeable points advantage.

But when the race resumed with a two-lap sprint, the seven-time F1 champion inexplicably locked his brakes. Hamilton missed the first turn trying to overtake Red Bull's Sergio Perez and went straight ahead, dropping from second place to 15th and scoring no points.

Red Bull have blamed Pirelli for the tire failure.

“We just hope we won’t see any incidents again like we saw in Azerbaijan,” team principal Christian Horner said on Friday.

Hamilton has disagreed with Red Bull's view, saying the Italian tire manufacturer was not at fault on this occasion.