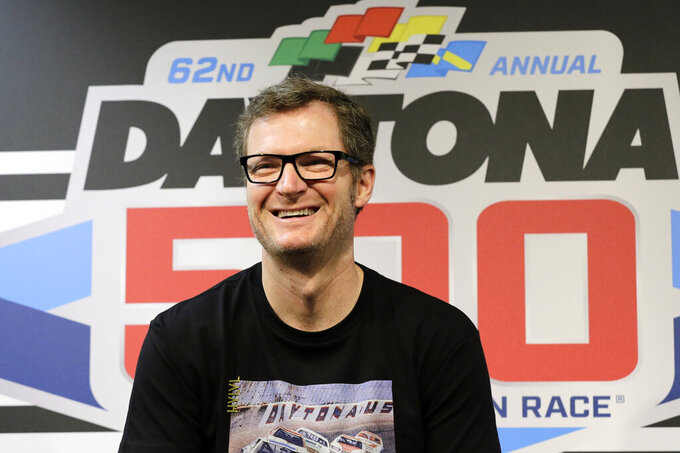 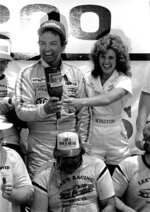 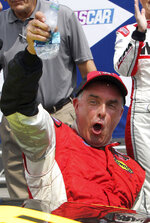 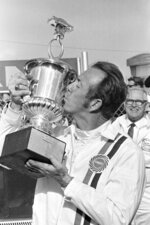 He waited longingly for a pat on the back from his famous father, worked diligently to generate compliments from crew members and other drivers and reveled in the roar of his fans — those he inherited from his father and the new ones he brought along for the ride.

NASCAR's longtime fan favorite received the sport's biggest honor Tuesday, being selected to join his father in the series' Hall of Fame. Earnhardt will be inducted in Charlotte, North Carolina, along with the late Mike Stefanik and 87-year-old Red Farmer, who is planning to race on Talladega's dirt track this weekend. Ralph Seagraves was named the Landmark Award winner for his contributions to the sport.

Despite never winning a series championship, Earnhardt still received 76% of the votes cast on the modern era ballot.

“Just talking about it, it's really emotional because I feed off affirmation," he said wistfully. “It’s such a great feeling to know people think I made an impact. I know what my numbers are and I feel like I was chosen because of that but also for the impact I made off the track, being an ambassador for the sport."

Being an Earnhardt name certainly comes with its advantages.

Junior's grandfather, Ralph, went into the International Motorsports Hall of Fame in 1997 and was named one of the NASCAR's 50 Greatest Drivers in 1998. Junior's father, The Intimidator, also made the list and even before finishing his career with 76 wins and a record-tying seven Cup titles.

The team-owning father even gave Dale Jr. his first big break, a full-time ride in the Busch Series in 1998. It didn't take long for Junior to prove he was a natural — on and off the track.

He won Busch championships in each of his first two seasons, then two races as a rookie Cup driver in 2000.

But when the elder Earnhardt was killed during the 2001 Daytona 500, Junior suddenly found himself in a place he never imagined.

“I knew when dad died I was going to assume most if not all of his fan base and I feel like I took care of that," he said. “I didn’t squander that, I didn’t ruin that and I also introduced myself to a lot of people who never heard of Dale Earnhardt."

Suddenly, the brash 26-year-old Earnhardt emerged as the face of the sport and started adding his own chapter to the family legacy. He won 26 races before retiring as a full-time Cup driver following the 2017 season, including two Daytona 500s and the 2001 Pepsi 400, the first Cup race held at Daytona after his father's death.

Still, fans watched to see if he could replicate the fearless style that made his father so popular. Junior never tried to compete with that image.

“There was a point in my career where i started to think I’m not going to win seven championships; I might not even one. I’m not going to win 100 races; I might not even win 40," he said. “There were a lot of people that wanted me to be as successful as he was and be as aggressive as he was and spin people out or whatever. So I started to think about what I could do outside of that and what else I could do to help the sport.”

While Earnhardt will be the headliner at the induction ceremony, he's impressed by his new classmates, too.

Stefanik won seven titles in NASCAR's modified series and two more in the Busch North series. The nine total victories is tied for second in series history with Richie Evans and Stefanik was named the second greatest driver in modified history in 2003.

The 61-year-old Stefanik, who died from injuries sustained in a plane crash in Connecticut last September, edged out Ricky Rudd for the second spot on the ballot with 49% of the vote.

“Phenomenal when you think about what he did. Nine championships," Kyle Petty said during NBCSN's announcement show. “Phenomenal record, phenomenal amount of wins.”

Farmer, one of the three original “Alabama Gang” members with brothers Bobby and Donnie Allison, beat out Hershel McGriff by earning 71% of the vote on the pioneer ballot.

The 87-year-old Farmer won four Late Model Sportsmen season titles, an estimated 700 to 900 races and also was a member of NASCAR's 50 Greatest Drivers. He also is a member of the International Motorsports Hall of Fame in 2004 and this week with the big series returning to Talladega, he's scrambling to put together a car for two nights of racing on the dirt track across the street.

“I had a little fender-bender in a 40-lapper last weekend," he said. “They had a three or four-car pile up right in front of me and I slid into it and messed up the nose pretty good. So I’m getting my backup car ready."