Chase Briscoe on the rise in Xfinity Series 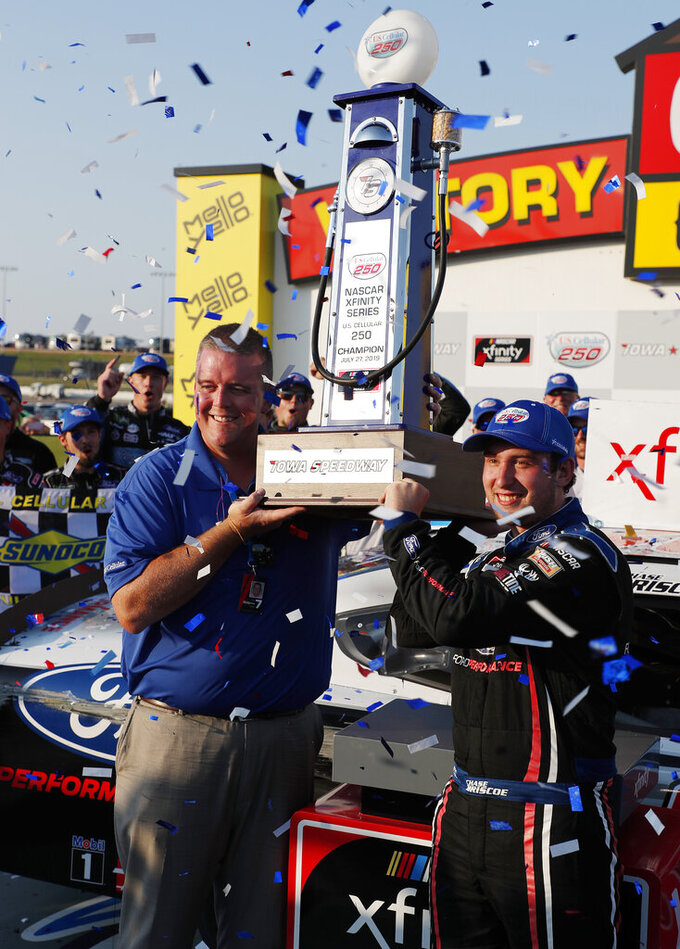 WATKINS GLEN, N.Y. (AP) — Six days after his first Xfinity Series victory of the season and not-so-fresh from a disheartening loss in the Truck Series race at Eldora only hours earlier, Chase Briscoe was ready for the challenge of Watkins Glen International.

"I definitely want to be higher up on the speed charts, but I was way more competitive than I thought I would be for never being here," Briscoe said Friday after posting the 11th-fastest time in the final Xfinity practice on the high-speed road course, well behind leader Kyle Busch. "I was trying to compare myself off of ... the guys who are consistently good road racers. I was happy with it."

Briscoe has had an eventful week. He passed Christopher Bell with seven laps to go and won the Xfinity race at Iowa Speedway last Saturday night. Briscoe's only other Xfinity victory came last season on Charlotte's roval.

Bell led a career-high 235 out of 250 laps, but old tires allowed Briscoe to gain the lead and clinch a playoff berth in the No. 98 Ford.

"It was big. We weren't the best car, but we were clearly the second-best car all day long," he said "It definitely was a good confidence-builder. It was good for our whole team. I think it bodes well."

Saturday's Zippo 200 at Watkins Glen is the first of three Xfinity road course races in August.

"Our team is really, really young and inexperienced in some ways. It was nice for them to prove to themselves that they could win as well," said Briscoe, who was operating on less than five hours' sleep. "Hopefully, it was the perfect time. These are the races where you can do more strategy than you can anywhere else. I think it's perfect timing (to be on a road course)."

At Eldora, Briscoe pitted after leading all of the first two stages, dropped to 12th on the restart for the third stage and rallied to as high as third with 19 laps left. But he dropped back and spun out during a series of accidents and finished seventh.

"I just need a lot more work, a lot more experience," said Briscoe, who plans to race again at NASCAR's second level next year before considering a jump to Cup. "There's a couple of tracks on the schedule I've never even been to still. I've got to get a lot better. Being able to go to these places for the second and third time in the Xfinity car will be a big benefit.

"It's just seat time, just knowing how to drive these Xfinity cars, what to expect. The first part of the season I didn't know what the car should be feeling like going into the race and just how much I could be aggressive and hustle it. As I get seat time, it's only gotten better."

The 24-year-old Briscoe is second in rookie points, four behind Noah Gragson's 629, and seventh overall. Cole Custer, Bell and reigning series champion Tyler Reddick have dominated the series all year.

"These last couple of weeks we've kind of started getting back into that (championship) conversation," Briscoe said. "We've been a lot more competitive throughout the weekend. We're getting stage points. Hopefully, we can be that fourth guy."