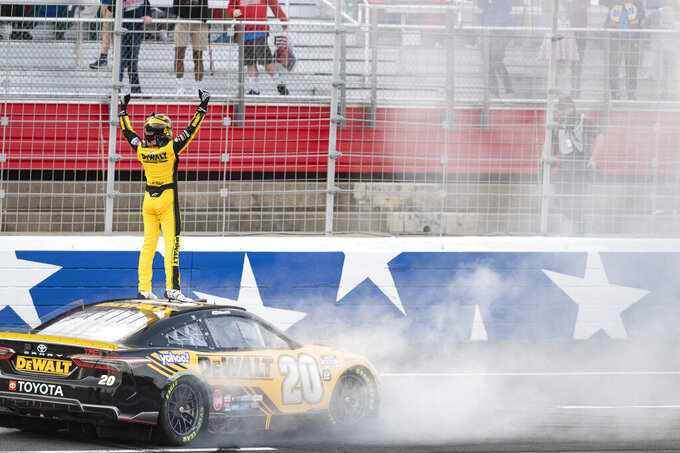 Last race: Christopher Bell went from well below the third playoff stage cutline to advancing in the playoffs, grabbing the lead from Kevin Harvick and pulling away in overtime to win on the road course at Charlotte.

Fast facts: Defending series campion Kyle Larson was among the four drivers eliminated, missing out by two points to Chase Briscoe. Daniel Suárez, Austin Cindric and Alex Bowman also were eliminated. ... Bell went from 11th to fourth in the playoff standings, 28 behind leader Chase Elliott. Joey Logano is second, 20 back, and Ross Chastain is 25 behind. ... Hendrick Motorsports, winner of the past two championships, saw its contingent in the playoffs cut from four to two, with Elliott and sixth-place William Byron still in the picture.

Last race: AJ Allmendinger passed Ty Gibbs after an overtime restart on the road course at Charlotte and won the first elimination race in the playoffs.

Fast facts: Allmendinger has won all four of his starts in the series on the Charlotte road course and has claimed 10 of his 15 career victories on road courses. ... All four JR Motorsports drivers — Noah Gragson, Justin Allgaier, Josh Berry and Sam Mayer —- advanced in the playoffs. ... Defending series champion Daniel Hemric was eliminated, along with Riley Herbst, Jeremy Clements and Ryan Sieg, who was two points behind final advancer Brandon Jones. ... Gragson, who had won four straight races before Allmendinger won the last two, leads Allmendinger by 12 points and Gibbs by 18.

Last race: Matt DiBenedetto earned his first career victory in the truck series with his win at Talladega, which finished under caution with him in front.

Last race: Max Verstappen claimed his second consecutive season championship, starting from the pole in rainy Japan and leading throughout to clinch the title with four races remaining. The Dutchman has won 12 of the 19 races contested this season and 13 of the last 20.