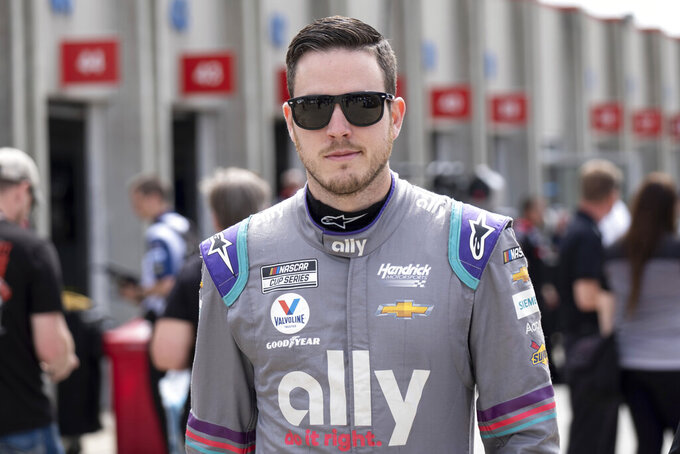 Alex Bowman walks from his garage before qualifying in seventh position for the NASCAR Cup Series auto race at Charlotte Motor Speedway on Saturday, May 29, 2021 in Charlotte, N.C. (AP Photo/Ben Gray)

NASHVILLE, Tenn. (AP) — Alex Bowman received a two-year contract extension from Hendrick Motorsports on Friday that celebrates NASCAR's return to Nashville and sponsor Ally's support of the first Cup Series race in the area in 37 years.

Bowman was extended through the 2023 season to align with Ally's commitment to the No. 48 Chevrolet. The digital financial services company entered NASCAR in 2019 as sponsor for seven-time NASCAR champion Jimmie Johnson and Ally wanted Bowman to move into the car this season following Johnson's move to IndyCar.

Bowman is in his sixth full season of Cup racing and his fourth with Hendrick. He has a career-high two wins so far this season and heads into Sunday's race at Nashville Superspeedway 11th in the standings.

The superspeedway has been dormant since it hosted its 21st and final Xfinity Series race in 2011. Dover Motorsports re-opened the track this year and shifted one of its Cup races to Nashville to bring NASCAR's top series to the concrete oval for the first time.

To support NASCAR's return to Nashville, Ally signed a multi-year deal for the entitlement rights to Sunday's race at the speedway. NASCAR gave Nashville Superspeedway a four-year deal for Cup.

“It was always our design to have the footprint expand,” Andrea Brimmer, Ally’s chief marketing and public relations officer, said when the sponsorship of the Ally 400 was announced. “It needed to be the right race in the right place with the right partners, and (Nashville) was the combination of all of those. It was the trifecta of what we were looking for.”

Ally as part of its entitlement sponsorship said it would donate $25,000 to Nashville’s Box 55 Association, which provides support to local first responders, and $25,000 to the Urban League of Middle Tennessee, a civil rights and urban advocacy organization.