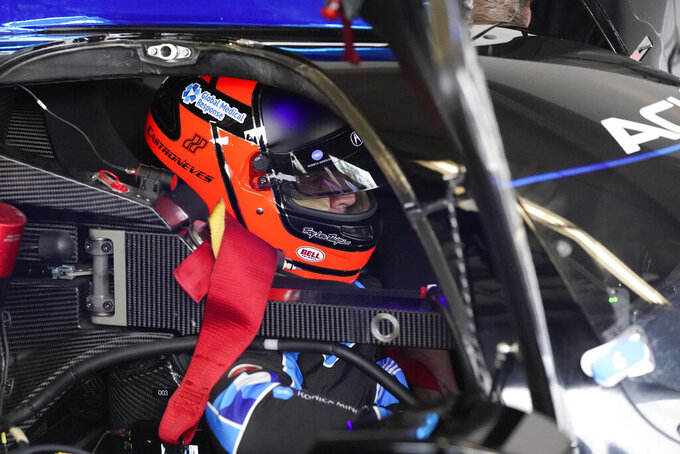 Helio Castroneves prepares to go out on the track for a practice session for the Rolex 24 hour auto race at Daytona International Speedway, Saturday, Jan. 23, 2021, in Daytona Beach, Fla. (AP Photo/John Raoux) 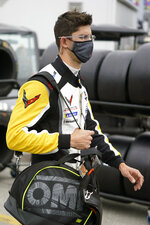 Wayne Taylor Racing needed every minute of the offseason to transition to an Acura factory program, an exhausting sprint to overhaul a program before the biggest American sports car race of the year.

If not for a tweak to the Rolex 24 at Daytona scheduling, the two-time defending race champions might not have been ready for the season-opener. The twice-around-the-clock race begins Saturday at Daytona International Speedway, a week later this year than usual.

Testing was scrapped as WTR focused all its efforts on bringing a new car to last weekend's three-day practice session. Team owner Taylor said he bought two new Acura DPi's after the pair it received in November had so much race wear they needed to be rebuilt.

If not for the IMSA calendar adjustment "we would never have been ready,” said Taylor. "Our chief engineer was doing shocks in the back of the truck one night, and he looked at his watch, and it was 3 a.m. in the morning. And he thought, ‘OK, if I drive home, that’s about three quarters of an hour.’ And he didn’t want to get up and come back, so he just decided to sleep in the trailer.

WTR had a long relationship with General Motors and has been an IMSA mainstay with a pair of driver championships and the 2017 prototype team championship along with contributing to eight manufacturer championships for GM brands.

The team has won three of the last four Rolex races, including two straight to head into Daytona looking for a threepeat.

But when Team Penske shuttered its team after a three-year run with Acura, the manufacturer looked for new partners and successfully wooed both Taylor and Michael Shank Racing to compete in the Acura ARX-05 this season.

The changeover was challenging enough — and then WTR brought in a brand new lineup.

Ricky Taylor, who spent the last three seasons driving an Acura for Team Penske, returns to his father's team as the reigning IMSA prototype champion. He needed a new job when Penske closed and was a logical driver choice because of his familiarity with the Acura.

He will partner for the full season with Filipe Albuquerque, the 2020 European Series champion. The lineup for the Rolex 24 expanded to include Indianapolis 500 winners Helio Castroneves and Alexander Rossi, who both drove Acuras for Penske as well.

Castroneves was Ricky Taylor's teammate at Penske and shared in the championship effort; Rossi was Penske's hired driver for the endurance races.

“The one thing I thought that would provide some continuity was to hire Ricky, who’s driven for us before and, obviously, is my son," Wayne Taylor said. “Helio and Alexander have driven this car the last three years, and Filipe just won the World Endurance Championship. I rate him very highly as a driver, and also personally. He doesn’t have an ego.”

The veteran lineup made last weekend's testing less stressful for WTR, which qualified fifth out of the seven DPi entries. Action Express accused the Taylor and Shank entries, along with a single Mazda entry, of sandbagging during Sunday's qualifying session to mask their speed ahead of the Rolex.

But Wayne Taylor went into last weekend focused more on fine-tuning the race car than determining where the team stacked up against the competition.

“It’s not like we feel like we have to rush to the track so the drivers can do laps. They’re all professional, they all know what the car’s about," he said.

Ricky Taylor, winner of the Rolex in 2017 while driving for his father's team, is confident WTR will be a contender when the clock runs out Sunday afternoon.

“The program already has a winning feeling to it, and I think everyone is thrilled about the possibilities,” he said.