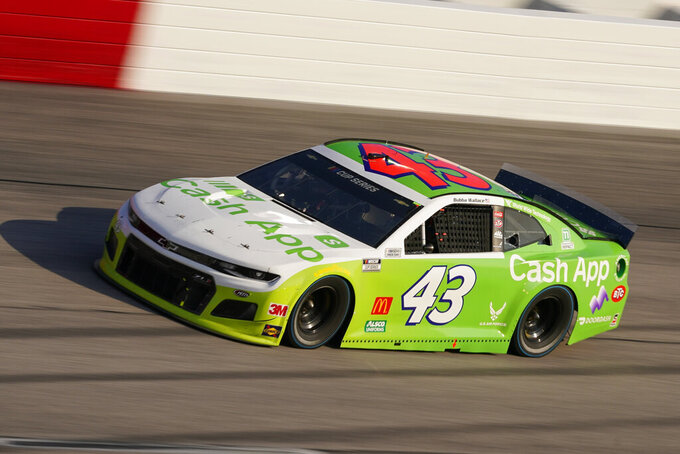 CHARLOTTE, N.C. (AP) — Bubba Wallace, loaded with several new sponsors he personally signed, will leave Richard Petty Motorsports at the end of the season and take his new wealth elsewhere.

Wallace, who has driven Petty's iconic No. 43 the last three seasons, told the team Thursday he would not sign a contract extension.

“This was not an easy decision as I have nothing but the utmost respect for Richard Petty and his family,” Wallace said in a statement, "but I believe it's time for someone else to take over the No. 43.

“Thank you to the King and everyone at Richard Petty Motorsports for giving me the opportunity to start my Cup Series career. I've grown so much as a driver and as a person since joining them. We've got nine more races together, and I hope we can finish the 2020 season on a high note.”

Wallace, who is 26, has a career-best five top-10 finishes this season and is ranked a career-best 23rd in the Cup Series standings. Wallace did not make the playoffs in any of his three Cup seasons and is winless at NASCAR's top level.

Wallace in 2013 became the second Black driver to win a national series NASCAR race when he won the Truck Series event at Martinsville Speedway. He is the only full-time Black driver at NASCAR's national level.

Wallace this season has taken an active role in pushing for racial inclusion and equality, pushing NASCAR to ban the Confederate flag at its races earlier this year. He parlayed that into several sponsorship deals that have been negotiated in a way that Wallace could take them with him if he left RPM.

Among his new partners are Door Dash, Columbia Sportswear Co., Cash App, and a personal deal with Beats by Dre. He's also got an affiliation with McDonald's, one of the sponsors at Chip Ganassi Racing.

It's not clear where Wallace is headed because several major teams with seats available told The Associated Press they were not in play for the driver. Wallace's agent did not return a request for comment from AP.

RPM, meanwhile, said it would finish the season with Wallace and announce its plans at a later date. The team has had difficulty landing sponsorship — one of the reasons the No. 43 has struggled to be competitive — and there has been speculation the team would be absorbed by a new owner.

The team said in a statement, “We look forward to the next chapter in the making for the iconic No. 43 team. We will announce our new driver in the future.”