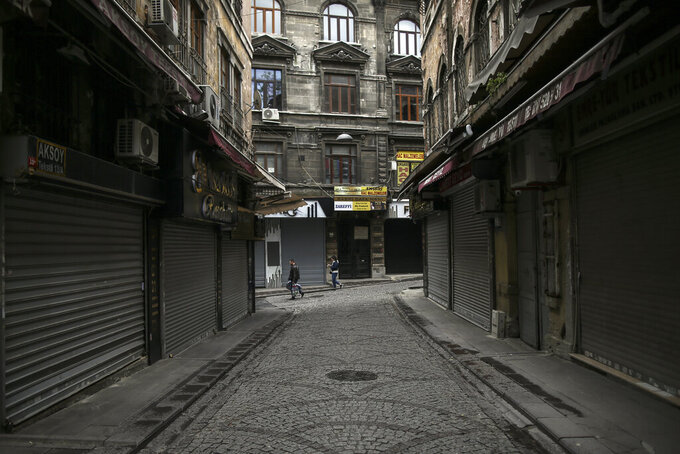 People walk in Eminonu market, an area usually packed with shop goers, but currently nearly deserted due to the strict lockdown to help curb the spread of the coronavirus, in Istanbul, Saturday, May 8, 2021. The "full lockdown," which began in late April and will last until May 17 came amid a huge surge in infections. (AP Photo/Emrah Gurel)

ISTANBUL (AP) — A video promoting tourism in Turkey amid the pandemic has caused an uproar on social media for showing tourism employees wearing masks that read “Enjoy, I’m vaccinated.”

The video, in English, was published Thursday on the social media accounts of the tourism ministry's official guide and was taken down later that day without explanation. It aimed to promote travel to Turkey as a “safe haven” for foreigners and showed unmasked tourists being served in hotels on the Turkish coast.

Turkey itself is in the final days of a full coronavirus lockdown and the government has ordered people to stay home and businesses to close amid a huge surge in new daily infections. But millions of workers are exempt and so are foreign tourists.

Opposition parties and critics on social media said the promotional video was an insult to Turks. A hashtag calling for the tourism minister to resign was trending Friday on Twitter. Users interpreted the ad's message as Turks being subservient to foreigners.

Tourism workers have been prioritized to receive vaccinations and the country’s foreign minister promised “we will vaccinate all people that tourists may see by the end of May.”

Many other Turks are still waiting for their turn for a vaccine shot. About 12.8% of Turkey's nearly 84 million people have been fully inoculated using China's Sinovac or the Pfizer-BioNTech vaccine.

Turkey's lockdown restrictions, which were expanded to stricter measures in late April, have brought daily infection numbers down from above 62,000 to around 11,500. Turkish President Recep Tayyip Erdogan said the aim is to lower new cases to below 5,000 a day in order for tourism to begin.

On Friday, Erdogan said Turkey would “move relatively cautiously” until end of May but would relax precautions in June. More details on his “controlled normalization” plan would be announced Monday. The president added that the government was helping the tourism sector and small businesses who have been most affected by the restrictions.

Turkey is courting international tourists during an economic downturn and needs the foreign currencies that tourism brings to help the economy as the Turkish lira continues to sink. International tourists have been enjoying an empty Istanbul and having Turkey’s famous beaches and historical sites all to themselves, while Turks have been told to stay home and face expensive fines if they break rules.

Russia, however, has suspended flights to Turkey until June 1 and the U.K. and France recently warned their citizens not to travel to Turkey, introducing mandatory quarantines for travelers arriving from Turkey. Formula One cancelled the Turkish Grand Prix scheduled for June on Friday and the UEFA Champions League final on May 29 was relocated from Istanbul to Porto in Portugal due to Turkey's outbreak and travel restrictions.

Turkey requires mandatory quarantines for people who visited India, Brazil or South Africa, but other travelers can begin their vacations straightaway.

In an Istanbul Economics Research survey with over 1,500 people published Friday, 77% of Turks surveyed said it's wrong that tourists are exempt from coronavirus restrictions.