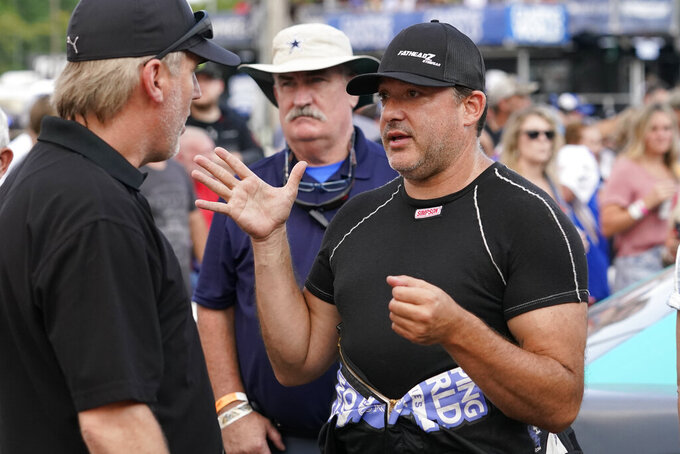 FILE - Tony Stewart talks before an SRX Series auto race in Nashville, in this Saturday, July 17, 2021, file photo. Tony Stewart will return to the Fox broadcast booth for the elimination rounds Sunday of the NHRA Nationals at Maple Grove Raceway. The NASCAR Hall of Famer and first-year NHRA team owner will be in the booth for the second consecutive race and the NHRA's playoff opener, which goes head-to-head Sunday with the NFL. (AP Photo/Mark Humphrey, File)

FORT WORTH, Texas (AP) — With his team still appealing $200,000 in fines and allegations from NASCAR that Stewart-Haas Racing manipulated the finish of NASCAR's most recent playoff race, co-owner Tony Stewart opted to not discuss that Wednesday.

“I’m not going to talk about it," Stewart said. “I’m so mad at NASCAR right now, I’m not talking about it."

NASCAR said Tuesday that a review of data and team communications showed that Stewart-Haas manipulated the results of the playoff elimination race at Charlotte.

While still moving forward with the appeal in that case, Stewart-Haas on Wednesday dropped its appeal of earlier penalties, including $100,000 in fines, against Kevin Harvick and his crew chief after his Ford failed post-race inspection at Talladega.

That move was announced after Stewart spoke with reporters at Texas Motor Speedway. A few hours later, SHR chief competition officer Greg Zipadelli said in a statement about the race manipulation charges that the team “denies any wrongdoing and will vigorously defend its personnel” in the appeals process.

Stewart, meanwhile, was in Texas for his 13th Smoke Show racing fantasy camp, an event that in its history has raised more than $1.5 million for Speedway Children’s Charities in Texas, but hadn't been held the past two years because of the pandemic. He will then go about 75 miles for this weekend's NHRA Texas Fall Nationals in Ennis, Texas.

“Super glad I’m going drag racing this weekend,” said Stewart, who has a car in each of NHRA's top two divisions. "If it weren’t for the fact that I’ve got a couple of appearances that I have to make, I wouldn’t be in another NASCAR race the rest of the year. Wouldn’t waste my time.”

On Sunday, Cole Custer appeared to deliberately hold up a line of traffic on Charlotte’s road course as teammate Chase Briscoe stormed past in a desperate effort to move into the third round of the playoffs.

Briscoe finished ninth, good enough to bump reigning NASCAR champion Kyle Larson from the playoffs as the field was trimmed from 12 drivers to eight. Briscoe earned the eighth and final spot in the next round of the playoffs by two points over Larson.

NASCAR levied a $100,000 fine for Custer and loss of 50 driver points, as well as 50 owner points for SHR. Crew chief Mike Shiplett was also fined $100,000 and suspended indefinitely.

Stewart sent out a tweet Tuesday night that read, “Looking for a new weekend hobby (something not south eastern based) if anyone has any ideas. Something low drama and relaxing preferably.”

This week, that includes catching some drag racing.