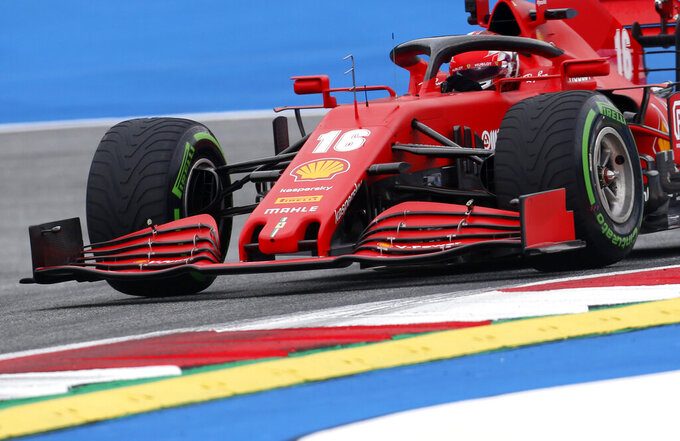 Ferrari driver Charles Leclerc of Monaco steers his car during the first practice session at the Red Bull Ring racetrack in Spielberg, Austria, Friday, July 3, 2020. The Austrian Formula One Grand Prix will be held on Sunday. (AP Photo/Darko Bandic)

SPIELBERG, Austria (AP) — Rival teams still want answers about whether Ferrari's engine last season was legal or not, after an investigation was closed following a private settlement with governing body FIA.

Questions were raised as to whether Ferrari’s fuel-flow exceeded its maximum permitted amount of 100 kilograms per hour. Teams argued that this may have been a key reason for Ferrari’s notably superior speed on long straights and its remarkable run of six straight pole positions.

“It does sit uncomfortably that there is an agreement that has been entered into about the legality and conformity of a car," Red Bull team principal Christian Horner said on Friday at the Austrian Grand Prix. "That immediately draws you to think ‘What is in that agreement? What does it comprise of?’ Because obviously a car is either legal or illegal.”

In March, Red Bull and six other F1 teams co-signed a statement opposing the lack of an explanation and demanding answers. But the FIA stood firm on its decision and the season was then postponed because of the coronavirus pandemic.

“It does nothing but promote suspicion when there are private agreements about legality and conformity. The healthiest thing would be to get it on the table so everyone sees what (the agreement) comprised of,” Horner said. “The FIA have said they are willing to do that. It would be great if Ferrari were prepared to do the same, so it puts it all to bed.”

Although the FIA is now willing to disclose details, it also needs permission from Ferrari to do so.

“In today's transparent world it would be good to understand what was the case," McLaren CEO Zak Brown said. "But it doesn't seem like that's going to come forward from them (Ferrari) anytime soon.”

“Good governance is extremely important," he said. "It may well have been good governance (from the FIA) but if you don’t know (what happened) it’s difficult to judge.”

But Ferrari is not prepared to share any details about the investigation.

“The answer is straightforward,” Ferrari team principal Mattia Binotto said. “It's confidentiality, it's intellectual property protection and that's the reason why we're not keen to it.”