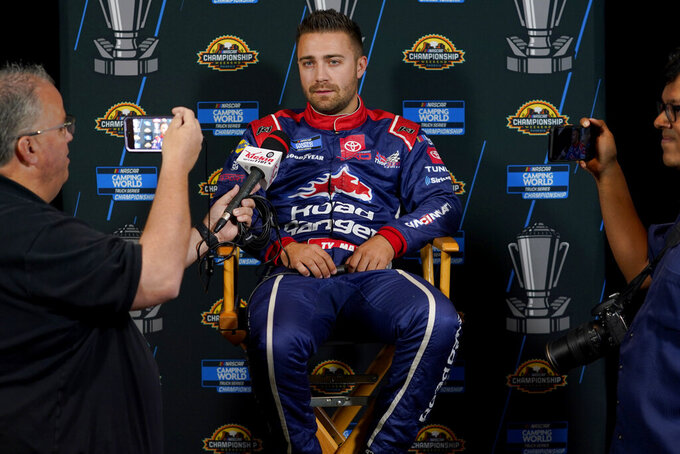 PHOENIX (AP) — Ben Rhodes has the championship experience. Ty Majeski has the momentum.

Between the two Toyota teammates, ThorSport Racing is in a good spot to bring home the NASCAR Truck Series championship Friday night at Phoenix Raceway.

“I've told people that Ty is the favorite, but I don't count myself out at all,” Rhodes said Thursday.

The four drivers in this year's championship field all have a claim to be the favorite at the 1-mile tri-oval track in the Phoenix suburbs.

The 25-year-old Rhodes is defending last year's series championship. He's joined in the final four by Majeski, Zane Smith and Chandler Smith. Three of the trucks are Toyotas, while Zane Smith drives his No. 38 Ford for Front Row Motorsports.

Rhodes has won just once this season but has been in the top 10 in 12 out of 22 races. He earned the right to defend last year's title after finishing sixth at Homestead two weeks ago, which was good enough to squeeze into the championship field, one point ahead of Stewart Friesen.

According to the betting odds, Rhodes is considered a longshot. He didn't seem bothered by that distinction.

“I think we were the longshot last year, too,” Rhodes said. “That’s kind of what we do. Some of that could come from stats, and I'm sure it does, but I don't care. I think we’re going to rise to the occasion just like we did last year and just like we did to put ourselves in this position."

Rhodes added that his team's difficult path to the championship field can be an asset.

“I think the fact that we've been forged in fire has already given us an advantage,” Rhodes said. “Then mentally, we've been here, done that.”

Majeski has plenty of momentum after a dominant win at Homestead. The 28-year-old led 67 of 134 laps in the race and crossed the finish line more than 4 1/2 seconds in front of the second-place finisher Zane Smith.

Majeski also won in September at Bristol, one of three victories this season.

“We have a lot of swag as a race team coming into this race,” Majeski said. “I don't think our confidence could be higher. And that takes the pressure off of us. In our minds, we think we're the favorites and we're coming in with that mindset.”

The 28-year-old Majeski joined ThorSport Racing last season as a part-time driver and an engineer. This year, he was able to move into a full-time driving role and quickly meshed with crew chief Joe Shear Jr.

“I look at it as a bunch of guys having fun, building race trucks together and going racing,” Majeski said. “I truly love being at the shop each day.”

Zane Smith was this year's regular season champion after finishing with three victories. He's in the championship field for the third time, which is the most out of this year's group. The 23-year-old has been the runner-up for the title in each of the past two seasons.

Smith started this season hot after switching to Front Row from GMS Racing, winning three of the first eight races. He's run near the front all season with 18 top 10s in 22 starts.

“We started really strong, which is great for a new team to click right away,” Smith said. “We've shown a lot of consistency."

Chandler Smith also won three races this season and is the defending race champion in Phoenix. The 20-year-old is making his debut in the championship field. Smith is driving for Kyle Busch Motorsports, which is in its last race as a Toyota team. The team plans to announce more about its Truck Series plans on Friday.