Palou arrives in Toronto with 2 IndyCar teams in hot pursuit 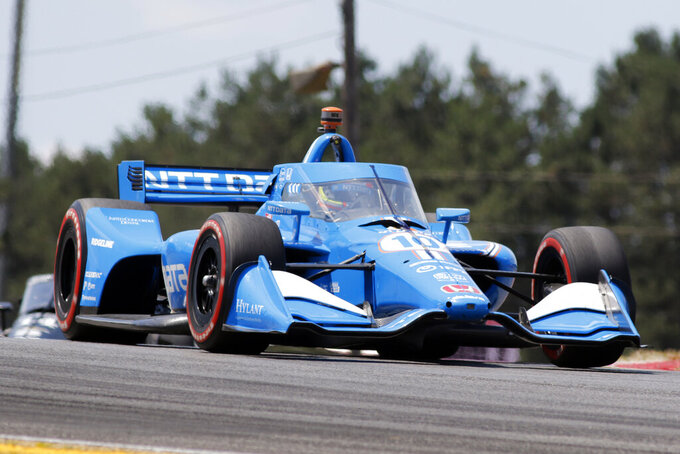 Alex Palou had to fight for every opportunity on his rise through open-wheel racing, and that probably makes everything that has transpired this week feel equal parts stressful and satisfying for IndyCar's series champion.

To put it simply: Two different teams think he'll be driving for them next season.

There's his current team, Chip Ganassi Racing, which announced Tuesday it had exercised an option to keep the 25-year-old Spaniard in one of its seats next season. Palou drove the No. 10 car to last year's title and, while he has yet to win this season heading into Sunday's race in Toronto, his consistency has him sitting fourth in the points race.

Then there's Arrow McLaren SP, which posted on social media shortly after Ganassi's announcement that it had agreed to a deal with Palou for 2023 — though whether that means an IndyCar seat or Formula 1 ride is anyone's guess.

“Obviously it's not ideal, especially for my crew, the people around me,” Palou acknowledged before Friday's practice session on the road course at Exhibition Place. “But for myself, it's all right. I'm a warrior. This is not going to stop me. If people think this is going to affect me on the track or something, they do not know who I am.”

Palou declined to discuss the specifics of his contract Friday, leaving room for juicy speculation: Is owner Chip Ganassi willing to strike a deal with McLaren and let Palou leave, albeit at a price driven higher by the contract option? Or are there mechanisms in the contract that give Palou an out for certain opportunities, such as a potential F1 ride?

McLaren indicated Palou would join its F1 testing program with fellow IndyCar drivers Colton Herta and Pato O’Ward, while O’Ward and 2016 Indy 500 winner Alexander Rossi have signed to drive for the team next season.

Palou said in a tweet Tuesday that he did not approve Ganassi’s news release — and did not provide the quote it included — and that “for personal reasons, I do not intend to continue with the team after 2022.”

“I have nothing else to add to what I said. I'm not going to tell more,” said Palou, who spoke with Ganassi this week but declined to shed any light on their discussion. “We're here in Toronto, we're fighting for a championship together and we're going to try to do the best we can to win it.”

Ganassi is having another banner season. Marcus Ericsson won this year's Indianapolis 500 and leads the points race. Palou is still in the fight, and six-time series champ Scott Dixon is winless on the year but sixth in the standings.

So what does Dixon, who has driven for Ganassi since his 2003 rookie year, think of Palou's current predicament?

“For sure there's some awkwardness," he said. “I think if you're going to have an example of how not to go about things, this is 100 percent how you don't go about it.”

Dixon said his own contract negotiations with Ganassi have been relatively straightforward over the years.

“You sit down, have a chat,” he said. “Even when I had options, I'd say, ‘Here are my options. What should we do?’ You have discussions. My first discussion with Chip didn't go the way I thought it would go, but that's part of the business. But I have always respected the black and white function of the way the operation has been."

Neither Palou nor Dixon think the murky situation will carry from social media to the garage and ultimately onto the rough, bumpy track in Toronto. The team is full of professionals, they said, and their priority is winning races.

“I'm a driver. It's the only thing I know how to do,” Palou said. “Me personally, it's not going to affect. The team, the organization itself? I don't think it's going to affect at all. My crew? I don't know, but I'm going to support them as much as possible because they have nothing to do about this.”

IndyCar returns to Toronto for the first time since 2019, when Simon Pagenaud captured the last of his three wins that season. The layout is largely the same but the surface, with its patches and difficult concrete-asphalt transitions, should test the entire field — especially the half that has never competed on the circuit.

“It's really rough,” Ericsson said. “It's well-used, but I like that. That's a challenge. We all need to accept that challenge and drive around it. I think the more rough it is, the harder it is for the teams and the drivers to get on top of it.”

Jimmie Johnson and Helio Castroneves were among several drivers that spun during a 75-minute practice Friday. There is another practice Saturday morning before afternoon qualifying.

“Concern is high,” Johnson said. “I was just surprised how different the surface is in real life. So many patches.”

A.J. Foyt Racing parked the No. 11 car of Tatiana Calderon this weekend because of missed payments by its primary sponsor, ROKiT, a global business conglomerate that also has been to court over missed payments to the Williams F1 team.

It was the ROKiT sponsorship that allowed Foyt to expand to three cars this season, with Calderon driving one of them on road courses and JR Hildebrand taking over on ovals; Dalton Kellett and Kyle Kirkwood are the other full-time drivers.

“We miss you, Tati, and hope to have you back soon,” the team said on social media.