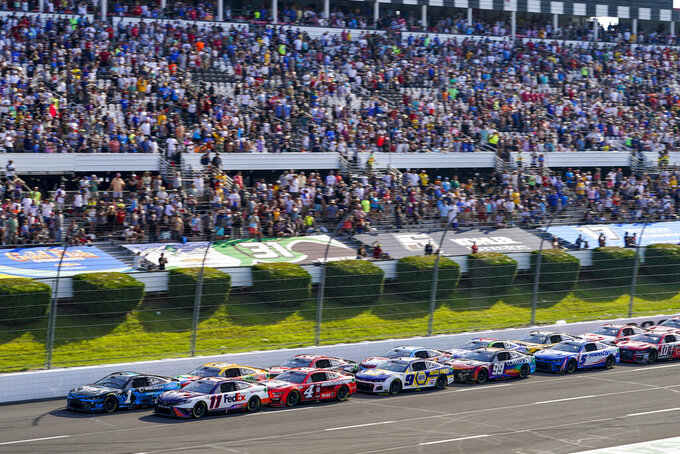 CHARLOTTE, N.C. (AP) — NASCAR levied another round of massive penalties on Tuesday, this time against Michael McDowell and Front Row Motorsports, for illegal modifications discovered after McDowell's sixth-place finish at Pocono Raceway.

If the No. 34 team wins one of the five remaining regular-season races to qualify for the playoffs, McDowell will be docked 10 playoff points.

The L2-level penalty was issued for an illegal modification of a single source supplied part — which is strictly prohibited on NASCAR's new Next Gen car.

“To make sure that all of those things stay above board, there’s going to have to be a culture shift from the way that the teams and NASCAR, for that matter, have done business,” NASCAR Senior Vice President of Competition Scott Miller said in January when announcing the Next Gen penalty structure.

“This deterrence model has more meat in it, more meaningful penalties, but I think we all thought that it was time for this with the introduction of the new car.”

The penalties on Front Row come after NASCAR disqualified Pocono winner Denny Hamlin and runner-up Kyle Busch when their Toyotas failed post-race inspection at Pocono. Chase Elliott finished third and didn't lead a lap but was given the win following the DQ's.

NASCAR found illegal tape on the front fascia of the Joe Gibbs Racing cars in its post-race inspection.

The disqualifications moved McDowell up to sixth in the final finishing order at Pocono. Both his Ford and the Chevrolet driven by Ricky Stenhouse Jr. of JTG Daugherty Chevrolet had been randomly selected for further inspection at NASCAR's Research and Development Center in Concord.

McDowell was ranked 20th in the standings with a career-best eight top-10 finishes prior to the penalty.