Mercedes loses both its protests after Hamilton loses title 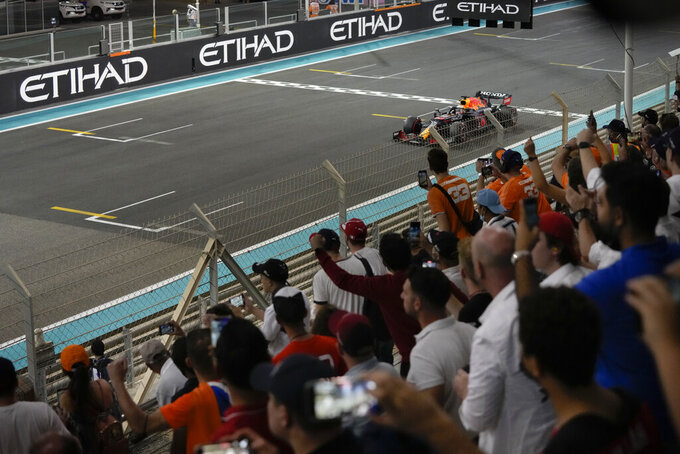 Mercedes lost both of its protests after Lewis Hamilton lost the Formula One world title to Max Verstappen on the final lap of the last race at the season-ending Abu Dhabi Grand Prix on Sunday.

After losing the protests, Mercedes filed for reconsideration to the International Court of Appeal.

Verstappen overtook Hamilton on Lap 58 in thrilling style after a crash involving Nicholas Latifi brought out the safety car with just a few laps left and confusion surrounded the restart.

One of the lost protests was whether Verstappen had broken rules by passing Hamilton before the safety car period had ended, when they were jostling next to each other waiting for the restart.

“Although Car 33 (Verstappen) did at one stage, for a very short period of time, move slightly in front of Car 44 (Hamilton), at a time when both cars where accelerating and braking, it moved back behind Car 44," stewards concluded. "It was not in front when the Safety Car period ended (i.e. at the line). Accordingly, the Protest is dismissed.”

The other protest concerned the restart procedure itself and the number of lapped cars overtaking the safety car, having been given the green light to do so.

Of the lapped drivers, only Lando Norris, Fernando Alonso, Esteban Ocon, Charles Leclerc and Sebastian Vettel overtook — those five were originally between Hamilton and Verstappen — while Daniel Ricciardo, Lance Stroll and Mick Schumacher did not.

Mercedes argued Hamilton would have won the race if all had overtaken the safety car due to the time required, making a final lap showdown impossible. Stewards ruled that it made no difference since the other three were not interfering with the outcome of the race, and also that race director Michael Masi had authority “to control the use of the safety car” in this case.

Before Latifi's crash, Hamilton was coasting to world title No. 8.

There had already been one virtual safety car deployed earlier in the race for a smaller crash, but this time the real one came out with little time left to remove Latifi's car and clear debris off the track.

Verstappen's Red Bull team decided to pit him to switch to new tires while Mercedes stayed out to keep track position. But it ultimately left Hamilton at Verstappen's mercy on far quicker, fresh tires than Hamilton's fading, slower ones. They were supposed to take him over the line, but in the end they couldn't hold off Verstappen.

Initially, the decision was taken not to let lapped cars overtake the safety car, which would have meant several drivers would have been in Verstappen's way at the restart and made it more difficult to reach Hamilton over one lap.

Red Bull team principal Christian Horner was in radio contact with Masi at that point and said “(But) we only need one lap” to finish a race properly.

Masi then reversed the call to allow lapped cars to pass and set up that final lap of racing.

“When everything is clear you have to release the track, so that's a fair point from the race direction,” Verstappen said after the race in agreement.

Verstappen made his pass in the fifth turn and Hamilton had one last shot. He pulled his Mercedes even with the Red Bull but couldn’t clear it. Verstappen became the first Dutch world champion and thwarted Hamilton's bid to move one clear of Michael Schumacher as the most successful driver in F1 history.

But Masi was firm in his reply.

The other protest was for the way Verstappen drove before the race restarted. He pulled right alongside Hamilton near the end of Lap 57 and fractionally ahead on Lap 58.

The regulations say “no driver may overtake another car on the track, including the safety car, until he passes the line for the first time after the safety car has returned to the pits.”

Mercedes had lodged their protests within the allotted 30-minute window after the race.

The team said it would “not make any further comment on the detail of that until the hearing has been conducted.”

Horner said "we are disappointed there has been a protest, but we trust in the FIA.”

Verstappen was also asked to comment on Mercedes's decision to protest.

“Not much really to say about that, it also sums up a little bit the season,” said Verstappen, who in previous races has expressed frustration at some penalties that have been given against him — including two in the last race in Saudi Arabia.

He had responded with sarcasm to the initial decision not to allow lapped cars to overtake the safety car.

"Of course, I’m not surprised,” Verstappen said with an air of resignation.

Minutes later, he was overtaking Hamilton on the way to glory.