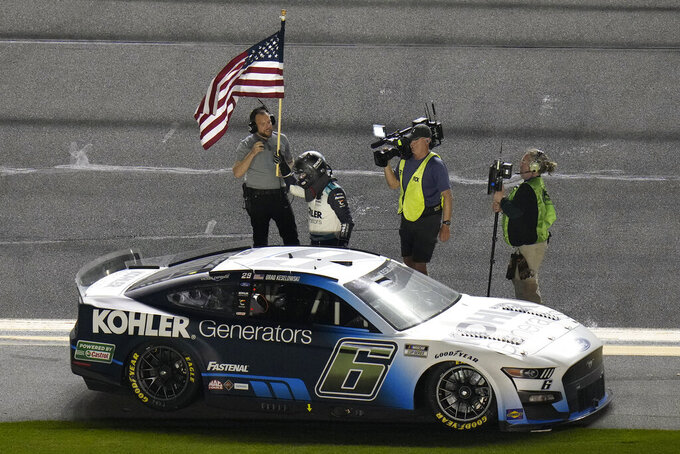 DAYTONA BEACH, Fla. (AP) — Brad Keselowski took Jack Roush to victory lane for the first time since 2017 as their rebranded team showed its ready for the Daytona 500.

Keselowski and Chris Buescher won the 150-mile qualifying races at Daytona International Speedway on Thursday night to put them side-by-side starting from the second row in NASCAR's sold-out, season-opening spectacular.

“We have good hot rods here,” Buescher said. “They are fast and they handle good. I knew we were in good shape that whole race.”

He won the race on the 60th and final lap of the second qualifying race for the Daytona 500 when leader Joey Logano wrecked trying to block Buescher's run. Logano, who was visibly angry after wrecking his Team Penske Ford, said he misjudged Buescher's closing rate.

“Driver screwed up. That’s really all there is to it,” Logano said. "It’s my fault. It stinks because it tore up our car and kind of puts us in a spot as a race team. It’s just a dumb mistake.”

Across the speedway, Logano's former Penske teammate was making his second trip to victory lane of the night.

Keselowski celebrated a huge first night of Daytona racing as both the team owner and its driver. He left Penske in November for an ownership stake of Roush's organization — now called RFK Racing for Roush Fenway Keselowski — and is now driver of Roush's flagship and original No. 6 Ford.

He has a long-term vision for RFK and its not a quick fix to get the team back among the NASCAR elite. And yet Keselowski won the first qualifying race and obviously has a fast car for the Daytona 500.

Keselowski said the night was critical for creating a culture that expects to win at RFK, which last won a Cup race in 2017 with Ricky Stenhouse Jr. at this track.

“There’s a lot of guys and gals on my team that have never won a race before. The company hasn’t won a race in five? Six years now? That’s any kind of race," Keselowski said. “It’s really important to get that winning habit built up, and the only way you can really do that is to go win. That builds confidence in each other and builds expectations.”

Floyd Mayweather Jr. will make his NASCAR debut Sunday when The Money Team Racing starts the Daytona 500. Kaz Grala drove the No. 50 Chevrolet into the race with a pass of J.J. Yeley on the final lap of the first race.

Six teams came to Daytona battling for four “open” spots in Sunday's 40-car field. Two spots were filled in time trials — former Formula One champion Jacques Villeneuve will make his Daytona 500 debut, as will Noah Gragson for Beard Motorsports — and one spot was available in each of the two qualifying races.

Grala earned one of them with a pass for 18th on the final lap of the first race. NY Racing, a team owned by Black entrepreneur John Cohen, raced its way into the Daytona 500 in the second race. The team pulled Greg Biffle out of semi-retirement and at 52, Biffle will be the oldest driver in the field Sunday when he makes his 15th career Daytona 500 start.

Grala said “the word on the street” was that his boss Mayweather would be at Daytona International Speedway on Sunday, but the team face-timed with the retired boxer from the starting grid.

“He was so pumped up about it. He was ready, jacked up and really confident in us,” Grala said. “That was a cool pep talk to get, not one that I’ve ever gotten before. Definitely a cool moment for us and having that validation that he’s excited about this program."

The 500 has been sold out for about a month with an expected crowd Sunday of more than 120,000 that Grala predicted would woo Mayweather. The Money Team plans just a partial schedule this season.

“He’s really going to get obsessed with this,” Grala said.

Roush had won a Daytona qualifier only once before, in 2012 when Matt Kenseth won both the short race and then the 500.

But their Fords are among a group of clearly superior Mustangs who strategized their racing plans and worked together. Keselowski led Ford to a sweep of the top four spots in the first race; Buescher gave Ford a podium sweep with his win, and Logano had made it four Fords at the front before his crash.

Larson led a race-high 34 laps from the pole, but finished seventh. He will lead the field to green Sunday in the debut of NASCAR's new Next Gen car.

The racing Thursday night was extremely conservative until Logano's last-lap block — because of the slow rollout of the Next Gen, the car missed its initial deadline by a year because of the pandemic — teams simply don't have enough race cars.

Everything is purchased now and teams aren't building their own stuff anymore. With cars so hard to come by at the start of the season, few have backup cars in Daytona. It meant everyone had to race fairly safe to save their car for the 500.

“It stinks because it tore up our car and kind of puts us in a spot as a race team,” Logano said.