IndyCar may have a hit on its hands on Nashville streets 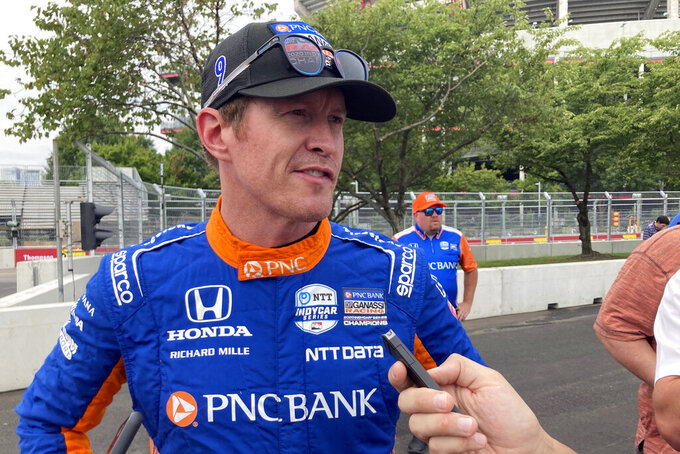 NASHVILLE, Tenn. (AP) — Simon Pagenaud hit Nashville, took a look at the 24/7 wild times and wondered how the heck he missed Music City all his life.

“I love food, I love partying, I love music. So I don’t understand where I’ve been,” the Team Penske Frenchman said. “I’m going to come back on an off weekend, I promise you that.”

Yes, the bars were packed before brunch, but guess what? So were the pit lane suites, and the makeshift grandstands were mostly full of fans all to catch a glimpse of the fastest newcomers on the Nashville scene.

Hot chicken and hot laps now go hand-in-hand in Nashville when IndyCar made its street course debut Friday over the water, around the NFL stadium, and up the hill 50 feet in the downtown section. The live music that’s a staple in the city found its way to a stage set up just outside the third turn — of the 2.17-mile, 11-turn track — and the food trucks and beer carts were bustling near the home of the Tennessee Titans.

Asked what he liked about the track, IndyCar championship contender Pato O’Ward was blunt:

That’s a perfect fit in a city home to Predators defenseman Mark Borowiecki.

IndyCar may have a hit on its hands if the first few days were an indicator of the enthusiasm from fans and drivers of the race. IndyCar driver Rinus VeeKay wore a cowboy hat, one city speed limit sign was changed to 240 mph and Jason Priestley was in the house. The first test as a race course — including a 3,500-foot straight straightway that spanned over the Korean War Veterans Memorial Bridge — seemed a success.

Will Power—- who laughed as he said there was no time on the bridge to enjoy “the nice water, the nice view” — called the ride off the bridge and into downtown “sketchy.”

From the stands or in the car, the bridge is already the landmark of note.

“I thought the bridge was going to be bumpy but I didn’t expect coming off the bridge to be quite that bumpy,” Herta said. “But it’s not a negative thing. I think it adds character to the track.”

“It’s one of those rules that I think they will change in the future,” Palou said. “We just have to recover those six places that we’re going to have. I think street racing is always crazy with the strategies."

Grosjean spent IndyCar’s summer break touring mostly the Midwest in his motorhome with his wife and three children. His kids loved “cage batting” and Monster Trucks. His wife loved Chicago. He found Nashville not quite fit for a family.

Like any working dad, Grosjean even found time to sneak in some business.

Grosjean made the jump this season from Formula One to IndyCar and has two straight top-10 finishes driving for Dale Coyne Racing. Like fellow IndyCar rookie Jimmie Johnson, the seven-time NASCAR champion, Grosjean committed this season only to the road and street course races. Grosjean tested an IndyCar on oval for the first time last week at a track just outside St. Louis, and even Johnson gave tips on navigating ovals.

Grosjean has fielded offers for 2022 — Andretti Autosport has been floated as a potential destination — but nothing is official. Grosjean said he “wouldn’t say no” to a full-season ride.

“There’s a few phone calls and emails and exchanges. But nothing yet, fully done,” he said.

Grosjean was nearly killed in a November F1 race in Bahrain when his car slammed into a barrier, split apart and burst into flames. The crash marked the end of his F1 career and the 35-year-old driver has no regrets about moving to America.

“I watch everybody in racing in Formula One. I still like to watch it,” he said. “Do I miss it? Absolutely not. I think I’m having more fun here. It’s a level playing field.”

While Grosjean, Jack Harvey and Ryan Hunter-Reay are among the drivers that could be on the move, Pagenaud said he’s only had talks with Team Penske about returning in 2022. The 2016 IndyCar champion and the 2019 Indianapolis 500 winner did call his race future “very interesting.”