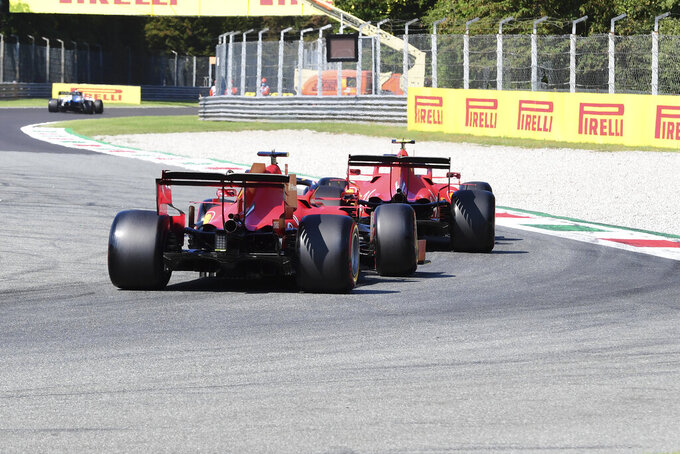 But Ferrari’s troubles deepened as both drivers failed to qualify inside the top 10 at the team's home circuit for the first time since 1984, with Sebastian Vettel not even making it out of Q1.

Defending champion Hamilton raced around the 3.54 miles (5.79 kilometers) of asphalt at the so-called Temple of Speed in the fastest lap recorded in the sport at 164.267 mph (264.362 kph). That eclipsed Kimi Raikkonen’s one-lap record of 163.785 mph, set by the former world champion on his way to pole at Monza two years ago.

“Fantastic from the team today in terms of timing, when they put us out on the track,” Hamilton said after clocking a best lap of 1 minute, 18.887 seconds. "It really demanded a clean lap so I am really happy.

“Valtteri was very, very close, pushing. I made some changes going into qualifying so I was a little bit nervous about whether that was the right thing to do but it worked just fine.”

Bottas and Hamilton exchanged track records on their way to securing yet another Mercedes front-row lockout. McLaren driver Carlos Sainz — who moves to Ferrari next year — was third, 0.808 behind the British driver and just ahead of Sergio Perez and Max Verstappen.

“Of course, it’s disappointing to miss out on pole, especially by such a small margin,” Bottas said. "Still, the laps were good and I’m looking forward to tomorrow.

“My race pace on Friday was matching Lewis and this track always provides opportunities, so it’s up to me to take them. It’s still all to play for.”

It was a record-extending 94th pole for Hamilton and he will start as favorite to win for a 90th time on Sunday, which would move him within one victory of Michael Schumacher’s record.

Hamilton looks on course to extend his championship lead, which stands at 47 points from Red Bull rival Verstappen and 50 from Bottas.

“In the race normally we are a bit more competitive and I think a podium is still possible tomorrow,” Verstappen said. “It won’t be easy to overtake and we are all very close from P3 to P10 but I expect we can still fight for P3 and we won’t talk about Mercedes, they’re on another level.”

Things went from terrible to abysmal for Ferrari. Charles Leclerc qualified 13th and has little chance of repeating last year when he won from pole position to end the team’s nine-year wait for victory at Monza.

“At the end we expected it a little bit coming into this weekend,” Leclerc said. “We know that Spa and here are probably the two worst tracks for us, with another one probably a bit later in the year. It’s like this, it’s tough, because once you do a good lap and you do P13, it doesn’t feel good.

“For now it’s like this, and I need to extract the maximum out of the car in the situation we are in, and that’s what I try to do. Surely, it hurts even more once it’s at home. But it’s a reality at the moment for us unfortunately.”

Vettel finished 17th after being hampered by traffic on his final lap.

“What a mess,” Vettel said on the team radio before letting out an expletive.

Bottas was 0.229 faster than Sainz and 0.323 quicker than Lando Norris after an impressive showing from the McLaren pair.

The session was interrupted about 10 minutes from the end after a mechanical problem with Daniel Ricciardo’s Renault, with the cars managing to come out for a final flying lap.

Hamilton was fifth fastest but survived a fright at the end, with the Mercedes driver swerving at speed on the approach to the Parabolica corner to avoid two cars going slowly side by side.

No action was taken by the stewards.

There was some good news for Ferrari at Monza as junior driver Mick Schumacher — Michael Schumacher’s son — claimed his first F2 feature race win and second victory in the series.