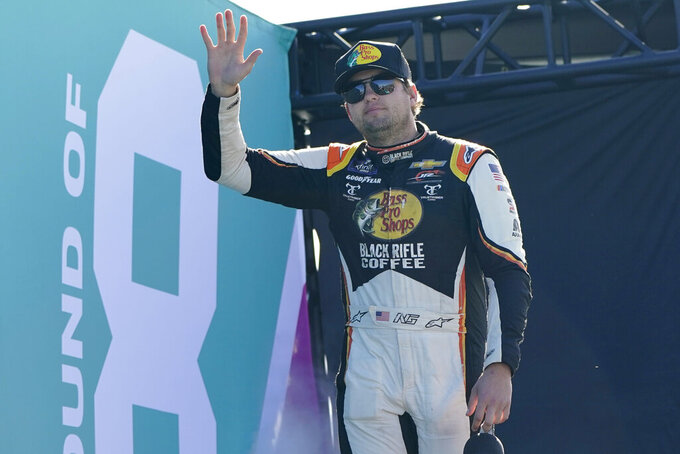 Gragson led 127 of the 200 laps then held off Ty Gibbs and AJ Allmendinger on a late restart to earn his eighth win of the season and the 13th of his Xfinity Series career.

Gragson joins teammate Josh Berry, who won last week at Las Vegas for the Chevrolet team owned by Dale Earnhardt Jr., as the first two drivers locked into the championship finale at Phoenix Raceway on Nov. 5. The remaining two spots will be determined next week at Martinsville Speedway in Virginia.

“Tonight’s not about locking in the championship four," Gragson said. "It’s about all the hardship that we’ve had here at Homestead.”

Last February, Gragson was on the verge of victory at Homestead when he slammed into a lapped car that had blown a tire ahead of him.

“I really wanted to win this one," Gragson said, "more than any other race in my career.”

Gragson was dominant throughout, sweeping the stages and holding off runner-up Gibbs and Allmendinger on a late restart.

Gibbs will head to Martinsville third in the playoff standings.

“That's a place we were really fast at earlier this year and probably had a shot to win,” Gibbs said. “I'm excited to go back there.”

Allmendinger, the regular-season champion, finished third after entering the race below the playoffs cutline after a late pit stop for two loose wheels caused him to finish 22nd last weekend.

Gragson, with three victories more than any other driver in the series this season, opened the playoffs by becoming the first driver in 39 years to win four races in a row.

“We're going to show up prepared,” Gragson said. "We're going to execute at the highest level. We've been executing as a championship team, and I just hope that after the season ends, people remember the season as the 9 team was the dominant team."