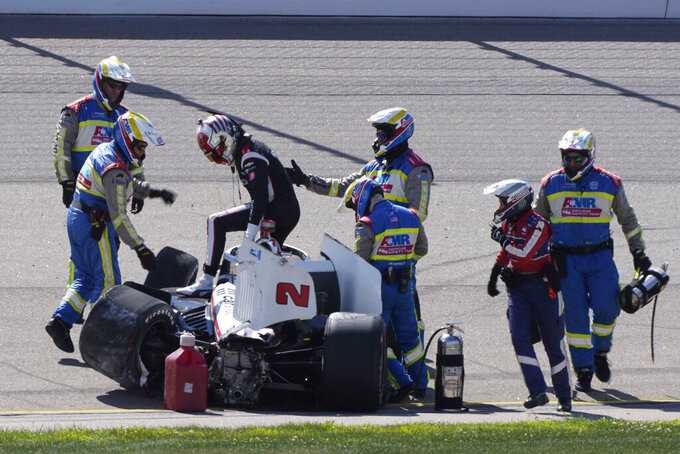 Josef Newgardenk, third from left, climbs out of his car after hitting a wall during an IndyCar Series auto race, Sunday, July 24, 2022, at Iowa Speedway in Newton, Iowa. (AP Photo/Charlie Neibergall)

Denny Hamlin ate dinner next to the winning Pocono Raceway trophy, opened the celebratory champagne awarded to the victor and enjoyed a glass with his meal.

It was an advertisement: “Live on EBay. 1 tainted trophy and 1 used bottle of champagne,” he posted on social media.

The first Cup winner to be disqualified since April 17, 1960, hasn't shied away from poking fun at the predicament Joe Gibbs Racing found itself in when the Toyotas of Hamlin and runner-up Kyle Busch failed postrace inspection Sunday at Pocono. Hamlin even shoved a clear piece of tape into the mouth of the eagle on the Pocono trophy to represent the illegal tape NASCAR says it found on the two JGR cars after the race.

He estimated the clear tape — because it stripped him of the victory and all the spoils that come with a win — was “worth about 300k. (Not to be included in sale)."

Chase Elliott is unlikely to bid on any of the items. He was eventually declared the winner of Sunday's race at Pocono, where he finished third and never led a lap but inherited the win when JGR failed inspection.

NASCAR's most popular driver has no interest in earning trophies that way.

“I don’t think any driver wants to win that way – I certainly don’t,” Elliott said.

And that's how NASCAR heads into this shared weekend with IndyCar on the road course at Indianapolis Motor Speedway. Kurt Busch missed Sunday's race at Pocono with concussion-like symptoms from a Saturday crash, and on the IndyCar side, two-time series champion Josef Newgarden won't know if he can race until a Thursday evaluation following his own health scare.

Newgarden collapsed and hit his head roughly 90 minutes after he'd been cleared by IndyCar's medical staff following a hard crash while leading at Iowa Speedway. Although there's been no mention of a possible concussion by either IndyCar or Team Penske for Newgarden, the team has put Santino Ferrucci on standby in case Newgarden isn't cleared to race Saturday.

IndyCar is coming off an action-packed weekend at Iowa Speedway, where new sponsor Hy-Vee spent $10 million to throw an extravaganza that included a pair of races and concerts by Tim McGraw, Florida Georgia Line and Gwen Stefani, whose 50-minute prerace set on Sunday drew drivers and teams to the stage and upstaged her headliner husband, Blake Shelton.

It was an electric IndyCar weekend that rivaled its marquee events at Indianapolis, St. Petersburg, Long Beach and Toronto, and raised the bar for what promoters could be doing to promote a series that trails NASCAR in popularity.

“Everybody that isn't Hy-Vee and Penske Entertainment, the people who brought Iowa together this way, can learn from this weekend because every single IndyCar weekend has to be like this,” said Pato O'Ward, who finished second on Saturday and won Sunday following Newgarden's crash.

“They've shown that if you put the effort in to a great event, people will show up. This place was packed.”

The reward was a championship chase that has tightened to six drivers separated by 44 points with five races remaining. Newgarden was scored as the points leader when he was dominating Sunday's race, but he dropped to a tie for third with Scott Dixon following his crash.

Now his title chances hinge on being cleared to race Saturday: Should Newgarden be benched, it would most certainly cost him his shot at a third IndyCar title.

And that's where Roger Penske and his committee missed taking a big swing at drumming up major interest in this weekend's IMS doubleheader. Penske owns the track and the doubleheader weekend is his to promote, except now his star driver is questionable. If Newgarden can't race, then its a throwaway for the No. 2 and it doesn't really matter where the driver finishes.

Ferrucci has been a super-sub of late, was 10th in the Indy 500 and is a fine choice for a standby driver. But with NASCAR also scheduled to be in town, there seems to be a deep pool of candidates that Penske could have chosen from.

Among them? Reigning NASCAR champion Kyle Larson raised his hand as interested in standing by for Newgarden and fans went wild over the idea of Larson in an Indy car. Sage Karam is scheduled to drive the Xfinity Series race but also said he's interested in double duty. IndyCar veteran Tony Kanaan was going to be at the track anyway, and the list goes on and on.

Juan Pablo Montoya just raced the road course in May in an Indy car and is a former Penske driver, and then there's Cup rookie Austin Cindric, who once thought he'd be an IndyCar driver but instead found his way to NASCAR. His father, Tim Cindric, is president of Team Penske and the strategist on Newgarden's car. What a weekend it could have been for the Cindrics.

Of course, all these hypotheticals could be for naught and Newgarden could be cleared to race Saturday. Either way, both NASCAR and IndyCar head to IMS with a slew of juicy storylines and the potential for an action-packed weekend on the hallowed grounds.