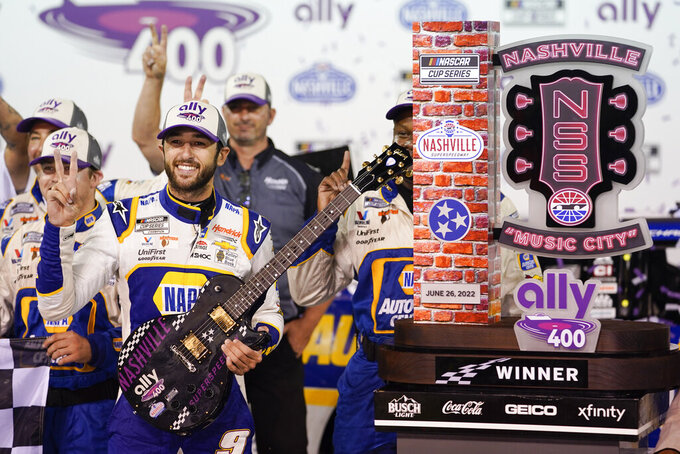 LEBANON, Tenn. (AP) — To be clear, Chase Elliott will take a victory anywhere he can get one.

But not long after lifting the celebratory guitar he earned for winning at Nashville Superspeedway, Elliott couldn't help but wonder if NASCAR is still at the wrong race track.

NASCAR's most popular driver is partial to the track at the Nashville Fairgrounds. When he heard the Cup Series would return to the area in 2021 — but at the D-shaped oval in Lebanon, some 40 minutes from the downtown hot spots — he was not pleased.

“One snooze fest at that joint will put the nail in the coffin of the fairgrounds, bummer,” Elliott tweeted in 2020.

He has now raced two consecutive years at the superspeedway, collected a win and the guitar late Sunday night, and his opinion hasn't changed. Elliott wants to race at the fairgrounds, where his Hall of Fame father often did and the two went head-to-head last summer in the Superstar Racing Experience. Chase won the race.

The Nashville market has indeed become a hot motorsports target since 2019 when NASCAR shifted its season-ending awards ceremony from Las Vegas to Lower Broadway. Nashville Superspeedway was added to NASCAR's 2021 schedule, IndyCar debuted a downtown street race that was a smashing success and SRX will return to the fairgrounds for a second consecutive year in two weeks.

Elliott won't be in the SRX field next month, but the morning after beating his father there last year — and after he had earlier been disqualified and finished 39th in the NASCAR race at the superspeedway — he made a passionate plea for NASCAR to take its Cup cars to the fairgrounds.

“Just the atmosphere of the fairgrounds, the energy last night was absolutely unbelievable. I wish all of you all had been there to see it. It was nuts. It just further made double sure that’s where we belong in my eyes," Elliott said. "I’ve always felt that way, but that other track (the superspeedway) is not the answer. The energy is right there in town, and we don’t need to search any further.”

Marcus Smith agrees, and as head of Speedway Motorsports he is pushing to return NASCAR to the 0.596-mile track for the first time since 1984. The initiative has been met by local resistance in public meetings. In the meantime, Speedway Motorsports last December purchased the superspeedway in Lebanon and was the official promoter this past weekend.

Speedway Motorsports founder Bruton Smith died last week at 95, and then Marcus Smith's mother suffered a stroke Friday. He was not available at the superspeedway this weekend to discuss Speedway Motorsports' plans for the Nashville area.

But many in the industry believe the market can support multiple races, even with NASCAR, SRX and IndyCar all stopping in Nashville over three consecutive months.

Elliott stumped for the fairgrounds, though he conceded that even with three hours of weather delays, a determined crowd hung around for a race that took seven hours to complete and was a better product than last year.

“It was way more racy than I thought it would be. But it still doesn’t mean I prefer this over the fairgrounds and what that could be,” Elliott said. “It’s just that racetrack and the history of that racetrack and its location is just something that we’re never going to replicate again.”

He then pointed to other markets where tracks are 30- to 45 minutes outside the city — in Michigan or Atlanta or Miami.

“With the fairgrounds you’d be drawing from an area that is 15 blocks away or so,” he said "Correct me if I’m wrong on that, but it’s a hell of a lot closer. In today’s society, you’re never going to build a racetrack in a city like that again.”

He said he's encouraged by Marcus Smith's commitment to the region and is hopeful to have his Cup car at the fairgrounds soon.

“It sounds like they’re at least working on it," he said. ”I think the positives outweigh the negatives, and I think there’s a way to be respectful in doing so of the folks that live in the area and be able to do it in a positive light.”