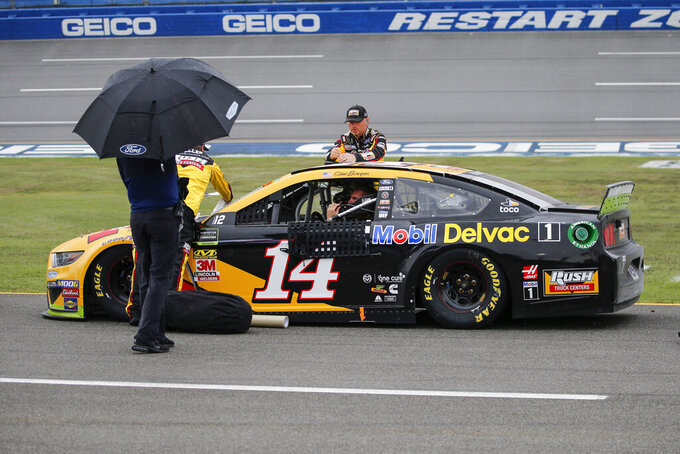 Clint Bowyer (14) sits in his car during a rain delay in a NASCAR Cup Series auto race at Talladega Superspeedway in Talladega, Ala., Sunday, Oct. 13, 2019. (AP Photo/Butch Dill)

CHARLOTTE, N.C. (AP) — Clint Bowyer has reached an agreement with Stewart-Haas Racing to return to the No. 14 Ford next season.

Bowyer has been with SHR for three of his 15 seasons in the Cup Series. His extension announced Thursday came as the Kansas native headed to his home track on the verge of elimination from the playoffs.

Bowyer, from Emporia, Kansas, is 11th in the 12-driver playoff field going into Sunday's race at Kansas Speedway. The bottom four drivers in the standings will be eliminated after Kansas.

"I'm proud to be back with Stewart-Haas Racing next year and very happy to announce it the week leading into my home race," Bowyer said. "This is a team filled with racers who love to compete, and as a racecar driver, it's exactly where you want to be. Great equipment, great teammates, and we're all backed by great people."

Bowyer was hired to replace team co-owner Tony Stewart following Stewart's retirement after the 2016 season. He made his 500th career start last weekend, has twice qualified for the playoffs driving for SHR but likely needs to win at Kansas to keep his championship chances rolling.

"Clint Bowyer is a racer to his core who brings passion and energy to our race team," said Stewart. "He's exactly who I wanted to drive my No. 14 car and we're very happy to have him continue with Stewart-Haas Racing."