Wolff: Russell has lots to learn after crash with Bottas 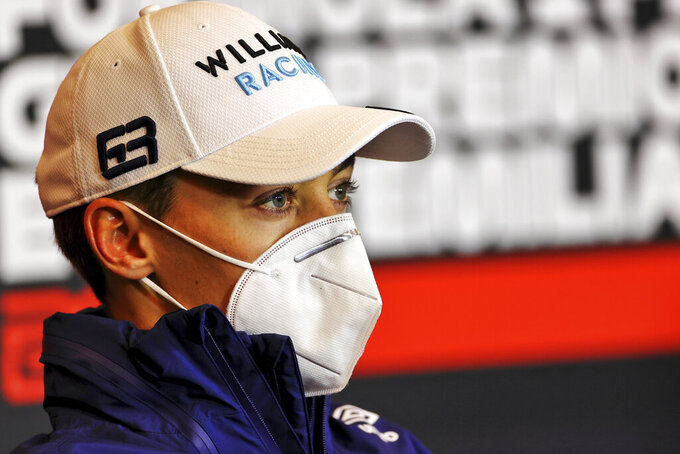 IMOLA, Italy (AP) — As well as damaging his car, George Russell could have damaged his Mercedes future after a high-speed crash with Valtteri Bottas at Imola on Sunday.

The 23-year-old Russell is in his final season with Williams and has been tipped for a Mercedes seat in 2022, possibly as a replacement for Bottas.

Russell has been part of the Mercedes’ young driver program since 2017 but did his immediate future with the Formula One team no favors after a crash with Bottas on lap 34 of the Emilia-Romagna Grand Prix. It caused the race to be red-flagged with debris from their cars scattered across the track.

Both drivers were unable to continue and Wolff said he would be speaking to Russell about the incident.

“The whole situation should have never happened,” Wolff said. “Valtteri had a bad first 30 laps and shouldn’t have been there. But George should have never launched into this maneuver, considering that the track was drying up.

“It meant taking risks, and the other car is a Mercedes in front of him. In any driver’s development, for a young driver, you must never lose this global perspective. So yeah, lots to learn for him I guess.”

Wolff stressed that Russell should have handled the situation differently.

“You need to see that there is a Mercedes and it is wet, it bears a certain risk to overtake,” Wolff said. “And the odds are against him anyway when the track is drying up."

“From my side of it, it’s quite straightforward, I was obviously defending my position ... he went for it and obviously lost it and hit me and it was game over.”

Russell said a number of factors had played a part, including the slippery conditions, but felt that Bottas had made a late movement toward him, breaking a driver’s code.

“I don’t see it that way at all. I didn’t make any sudden moves ... and always left the space,” Bottas said. “From my side it was clean. Of course I’m defending, I’m not going to make any room for him but also when I race, I have respect, so I see it differently than him.”